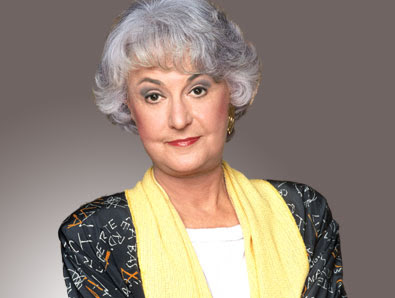 By Edward Copeland
And then there was Bea. It was hard to mistake the incomparable Beatrice Arthur, her height hovering over her co-stars with her deep, throaty voice as another actress, but that's what made her work all the more special, be it on stage, screen or the medium for which she's best known, television. Arthur has died at the age of 86.

She appeared in various television shows throughout the 1950s, including as a regular on Caesar's Hour and later The Sid Caesar Show. She made her Broadway debut in a revival of The Threepenny Opera as Lucy Brown, a role she returned to in another revival of the show the following year. She created the role of Yente, the matchmaker in Fiddler on the Roof. In 1966, she co-starred as Vera to Angela Lansbury's Mame and both won Tonys as a result. In 2002, Arthur tread the boards again in a one-woman show that earned a Tony nomination.

Her movie work was sparse, the most notable ones being 1970's Lovers and Other Strangers and playing Vera once again, only opposite Lucille Ball in the 1974 movie version of Mame. The 1970s though was when television brought Bea Arthur to superstardom. A couple of guest appearances on All in the Family as Edith's cousin Maude, as left wing as Archie was right, created a character for the ages. The 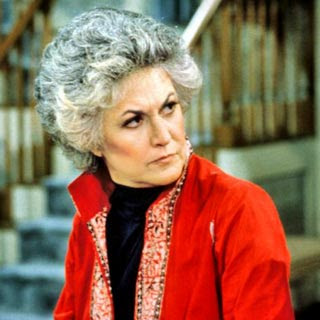 hilarious anti-chemistry between her and Carroll O'Connor's character was a joy to behold and Norman Lear recognized Maude's brilliance as she soon got her own show and became All in the Family's first spinoff. She also was the first spinoff to begat its own spinoff as her maid Florida (Esther Rolle) went on to Good Times. Like the show that spawned it, Maude tackled many topical issues, often ones even more controversial than its predecessor such as the legendary episode where Maude found herself pregnant late in life and decides to have an abortion. Maude earned Arthur five Emmy nominations and one win. Arthur also made lots of guest appearances (earning Emmy nominations for appearances on Laugh-In and Malcolm in the Middle) including a lengthy one as Jessica's heavenly guide on Soap's 4th season recap. The series always included an episode at the beginning of each season recapping what had happened before. Jessica Tate (Katherine Helmond) had flatlined from a mystery disease she'd contracted. Arthur was supposed to take her to her heavenly reward, but Jessica bent her ear over all her family's woes and how they still needed her. Arthur had a heavenly cameo on another show where she didn't turned up in the afterlife as Larry David's mother, berating his actions. If you haven't seen it, rent Curb Your Enthusiasm Season Five.

Perhaps, thanks to the practically unavoidable repeats, what Arthur will probably end up being best known for is her role as Dorothy Zbornak on The Golden Girls. I haven't checked it out, but the four-member cast must be the only series cast in history where every member won an Emmy during the show's run. (A would-be commenter, not noticing that I don't publish anonymous comments, did remind me that All in the Family and Will & Grace also achieved this feat.) With Arthur joined by former Maude co-star Rue McClanahan, versatile pro Betty White and the relatively unknown Estelle Getty, even the weakest episodes and the lamest jokes came off like a well-oiled machine in their talented hands. Dorothy wasn't remotely a Maude retread. She was a completely different character, but she was still funny as hell as was Arthur in almost everything she did. I just wish I could have seen what she was like on stage in a musical in her prime.

Since I've never learned the knack for embedding videos, I'd direct you to Forward to Yesterday and The House Next Door for many good ones. RIP Ms. Arthur.