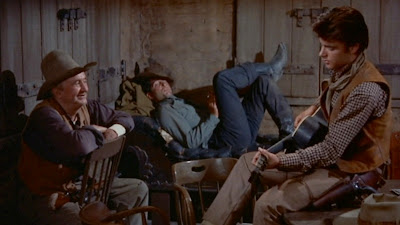 By David Gaffen
The era of the revisionist Western is generally associated with the early 1990s, but the reality is that the subversion of the genre began in earnest several decades earlier. It picked up steam with Sergio Leone’s spaghetti Westerns and films directed by Don Siegel and Sam Peckinpah, but Howard Hawks’ Rio Bravo was one of the earlier entries to play with the conventions of the genre.

It is well known that Hawks disliked High Noon, which was released in 1952, seven years before Rio Bravo — in part because of the anxiety and insecurity displayed by Will Kane, the hero played by Gary Cooper. In and of itself, this was already a subversion of the archetypal protagonist of the western, although the stoic nature of Cooper’s character fit squarely into the conventions established already within the Western’s short history on film.

Rio Bravo features John Wayne in another performance as the towering authority figure, but after his iron-clenched performance a few years earlier as Ethan Edwards in The Searchers — another film directed by John Ford that presents a protagonist as separate from the family he serves — his John Chance is another stoic, laconic type, but his relationships with the other principles have a more relaxed, lived-in quality, particularly Dean Martin, the town drunk who later redeems himself. This was Wayne entering the latter stages of his career, when his performances brought with him a quiet steadiness, devoid of the coiled rage one saw in The Searchers, which remains his best performance.

The other characters in the film are archetypes in and of themselves — the drunk, the kid, the grizzled codger — but they’re invested with a light spirit. While Hawks and Wayne may have wanted to answer High Noon’s supposed take on blacklisting with one that did not show society abandoning a man who was protecting them (the very position taken in The Searchers), this take was in some ways a more liberal, community-oriented one. Wayne’s allies are of varying ability, what with a drunk, an inexperienced kid, and a coot to protect the town against the rancher seeking to bust Joe Burdette (Claude Akins) out of prison — and Wayne’s Chance is constantly turning down entreaties from other townspeople who want to help him.

It’s hard to believe that Hawks’ chief problem with High Noon was its political bent and what they interpreted as weakness in the main character, particularly as Rio Bravo works more effectively as a rejoinder to the somber High Noon. Much of the film’s relaxed nature comes from Wayne’s interaction with Angie Dickinson’s Feathers character and the elderly deputy, Stumpy, played by supporting actor du jour Walter Brennan. Dickinson more than holds her own here — the film has several gentle moments of interaction between her and Wayne, always underrated, who as usual says more with the phrasing of one line or a reaction than plenty of actors could with a five-minute soliloquy.

And the movie remains a great showcase for what can only be described as the enjoyment of filmmaking, best illustrated by two of Martin’s big moments. One, of course, is the scene where he walks into a bar to find a character’s killer, and spots drops of blood falling into a beer mug, cluing him into the outlaw’s presence in the rafters; it’s the kind of moment Quentin Tarantino lives to include in his films.

Of course, there’s the brilliant scene prior to the climax where Martin and Nelson — both possessing terrific voices, as it was well known — sing “My Rifle, My Pony and Me.” The scene serves its purpose as a break from the rising tension throughout the latter part of the film, but who could cast a movie with Martin and Nelson and not have them collaborate with a vocal performance?

Rio Bravo is one of those films that a person could see once and feel they’ve seen it five times, so lived-in is its appeal, so comfortable its presence. In a sense one could see it three times while only seeing it once, as

Hawks and Wayne teamed up for two more versions of the tale. El Dorado (1967), in a way, improves on the original (Robert Mitchum and James Caan are superior actors to Martin and Nelson), but the villains are stronger in the original, but these are minor differences. It’s hard to say to whom this film belongs. Martin was never stronger than in this movie, a surprisingly effective cowboy who generates a ton of empathy as a result of his character’s struggle with booze. He commands the screen in his scenes in part because Wayne was a consistently generous performer on-screen, allowing the other actors room to breathe while he comfortably let his presence do the work for him.

Wayne’s ability to slip comfortably from the foreground to the background in favor of his co-stars was among his greatest strengths — the subtle approach is also probably what kept him from winning awards until he took on the more colorful Rooster Cogburn role in True Grit — but Rio Bravo is one of his best roles. It is justly remembered as one of the classics of the genre.

Comments:
I'm one of the few people who thinks El Dorado is better than Rio Bravo--for the very reasons you mentioned.

I like Bravo, but I can't deny that I've always been a tad incensed that Hawks and Wayne dissed High Noon for featuring a lawman who needs assistance from the townsfolk. Sure, John Chance may turn down help from people, but in the end he's still getting backup from three individuals--the fact that they're a drunk, a kid and a codger is immaterial. Will Kane does it on his own...with only a slight assist from his Quaker wife.

Hey pallie David, couldn't agree with your more in your observation that our Dino "commands the screen in his scenes".......this is definitely our Dino's greatest performance in a dramatic role...he oughta gotten at least an oscar nod for his stellar role as the Dude....never was, never will be anyone as cool as the King of Cool...oh, to return to the days when Dino walked the earth....