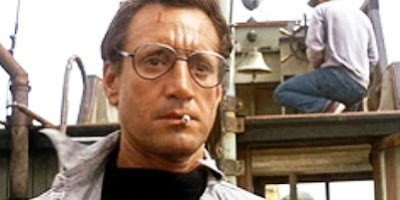 "We're gonna need a bigger boat." Just reading those words doesn't indicate that it would be one of the most famous lines of dialogue from a classic movie, but when you hear Roy Scheider's voice as Chief Brody speaking it with a mixture of fear and resignation, you know why it's worth repeating. It wasn't a shark that got the great actor, it was a long struggle with multiple myeloma before a staph infection took his life Sunday in Little Rock, Ark.

Jaws may be Scheider's lasting legacy, but his career went far beyond that. He was nominated for an Oscar twice, in 1971 as Popeye Doyle's partner in The French Connection and in 1979 as Bob Fosse's alter ego Joe Gideon in All That Jazz.

There could be an air of the sinister in his roles such as in Klute or as Dustin Hoffman's brother in Marathon Man, where Scheider took part in one of the great life-and-death struggles ever put on film.

Scheider also brought gravity to films that didn't really deserve them such as Blue Thunder or Listen to Me. He even helped the misguided sequel Jaws 2 work better than it should (as long as the teens weren't alone on the screen anyway). He even dared to take the lead in 2010, the sequel to 2001: A Space Odyssey.

Still, it's his first outing as Martin Brody, police chief of Amity Island, that's going to be the dearest in my heart and mind. An exiled N.Y. cop with a fear of water who moves to an island, which of course is only an island if you are looking at it from the ocean. No matter how you looked at Roy Scheider, he was an actor, and one of the most underrated.

Comments:
He was great. Not a towering icon, but more, a solid actor. I can't think of anything he wasn't just great in. And productive right to the end. Nice write-up, Ed.

'Tis a sad day indeed. It's hard for me to even imagine him as an old man.

Calibra Pictures is pleased to announce the release of the trailer for Roy Scheider’s last film “Iron Cross”.

The revenge thriller, written and directed by Joshua Newton, will be previewed towards the end of the year in Los Angeles, following our Roy Scheider Film Week, dates and location tbc.

The trailer can be downloaded securely from the following yousendit.com link:

We’d be delighted to receive your comments.