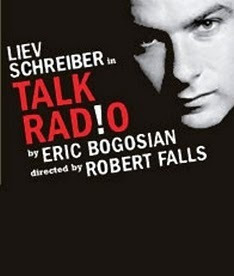 By Josh R
A sharp, chill wind is blowing across West 48th Street, even as the mercury hovers around the 70 degree mark. It doesn’t appear to be emanating from The Walter Kerr, where those lovably dotty eccentrics, the Edith Bouvier Beales, are rattling around the dilapidated Easthampton estate known as Grey Gardens; nor can it be traced to The Biltmore, where the ghosts of Kurt Weill and Lotte Lenya re-enact their arcane waltz of courtship to the strains of LoveMusik. Rather, it seems to be coming from the general direction of The Longacre Theater, currently playing host to the breathtaking revival of Eric Bogosian’s Talk Radio. Summer may be just around the corner, but visitors to the theater district are best advised to bundle up tight — great performances have been known, on rare occasion, to alter the weather, and the icy currents swirling around Robert Falls’ shattering production cut right to the bone.

It’s been nearly 20 years since New York theatergoers were first introduced to the character of Barry Champlain, a radio shock-jock and self-styled prophet of doom who bears sneering witness to the decline of western civilization while his audience of insomniacs, paranoids and miscreants listen in rapt attention. The brainchild of Eric Bogosian, who both wrote and starred in the original production (as well its as subsequent film adaptation), Talk Radio views its central character’s drug-and-booze fueled rants through the prism of a nightmarish contemporary culture in which broad social undercurrents of rage, despair and a collective sense of helplessness are cynically re-packaged as entertainment. Probing the dark recesses of a twisted, tortured soul while examining the extent to which his words both reflect and distort the cultural landscape he inhabits, the play functions as both an absorbing character study and a corrosive cautionary tale. Barry Champlain is both the symptom and the illness of the world in which he lives, and — theater patrons be warned — as brilliantly incarnated in the current production by Liev Schreiber, he isn’t taking any prisoners.

The play chronicles, in real time, a single broadcast of "Night Talk," a call-in program whose main appeal is the toxic personality of its host. Chain-smoking like a diesel engine, knocking back shots of Jack Daniels and chasing them with the occasional snort of cocaine, Barry is — as described by another character — a runaway train on course with certain destruction. Not that, from all outward appearances, he seems to mind all that much. Champlain treats all of his callers — ranging from lonely pet lovers to venom-spouting racists — with equal degrees of antipathy and contempt. He lives for confrontation; eager to pounce when given the smallest amount of provocation, you can sense his boredom and disgust when drippy fans call to offer him praise. Compliments have no value in Barry’s universe; they bear testament to the fact that no one is really listening to what he’s saying.

A character writ this large requires an actor who is not only unafraid to venture into dark territory, but is willing to turn himself inside out in service to a role. Schreiber is truly remarkable in a fearless, lacerating performance that, in its early stages, makes brilliant use of the aloof, mercurial qualities that have distinguished many of his screen appearances, yet reveals terrifying depths of pain and self-loathing as the character’s descent into hell is made physically and verbally explicit. As tormented as he is tormenting, this Barry is rendered with a searing clarity that rips right through the fourth wall and grabs the audience by the throat. Words are his only defense against the demons that weigh upon him both from without and within — only near the end of the play, when this acid-tongued viper finds himself, quite literally, without any words, can the audience fully comprehend the panic, the fear, and the stinging sense of loneliness that inform his callousness. Reduced to a wounded animal, staggering around the stage while trying to regain his bearings, the actor gives a performance that — to paraphrase Pauline Kael in her discussion of Vivien Leigh’s work in A Streetcar Named Desire — can be truly be said to inspire both pity and terror. In a season that has already given us many harrowing considerations of self-imposed isolation — Christine Ebersole’s work in Grey Gardens and Raul Esparza’s in Company, to name two — Schreiber’s may just be the very best.

Robert Falls’ superb direction brings out the sharp humor of Bogosian’s barbed prose, and finds subtle ways emphasize the prescience of the playwright’s vision — a certain shambling blowhard who had his own radio show up until recently would have done well to see Talk Radio before weighing forth on women’s college basketball. The actors who fill out the cast — Stephanie March as Barry’s discarded girlfriend, Michael Laurence as his hapless producer, and Peter Hermann as a slick corporate suit with dollar signs in his eyes — provide excellent support.

In Oliver Stone’s gutless 1988 film version — which Bogosian was, much to his credit, very unhappy with — the character of Barry was softened to the point that he was made to seem almost like a lone voice of reason in world of chaos. Stone, who clearly missed the boat in terms of what the play was actually about, went so far as to make a martyr of Barry, having him (over the objections of the author) fall victim to an assassin’s bullet. As far as denouements go, that one’s too easy. The tragedy of Barry Champlain is that he has to go on living — with himself.

Comments:
I wish I could see this, especially since the movie version is one of the Oliver Stone movies I like best, but it makes perfect sense he'd screw that up as well. Between you review and Matt's, it really makes me salivate for NYC, but alas those days are gone for me...

I'd be curious to read Matt's take on it - send me a link!