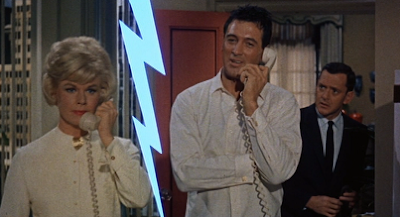 By Edward Copeland
If there has been a film that's a bigger triumph of innuendo than Lover Come Back, I haven't seen it. While as a movie, it's not as good as the Rock Hudson-Doris Day collaboration Pillow Talk, it's so kooky and full of double meanings, that it's hard not to love it. I have to wonder if it played the same way for audiences in 1961 who didn't know the truth about Rock Hudson's offscreen life.

Now, the none-too-subtle hints about Hudson's sexuality have been discussed before, most notably in the documentary Rock Hudson's Home Movies, which I've never seen. Still, I can't help but wonder how 1961 audiences could have missed them, though obviously they stand out more now going into a film such as Lover Come Back.

The plot is a rather simple one: Doris Day plays Carol Templeton, an ad executive who has recently been hired by a New York firm. Carol, as you'd expect, is prim and proper and likes to play by the rules.

Hudson is Jerry Webster, a rival ad exec as well as a hard-drinking lothario. When Webster manages to steal an account out from under her, Carol is determined to get even. Her boss advises her that Webster is like the common cold: Sooner or later, you catch it and it's best not to fight. "There are two ways to fight a cold," Carol replies. "You can fight it or you can go to bed with it." Of course, Carol doesn't recognize the double meaning of her words.

Webster has other problems to deal with: the ne'er-do-well son of his firm's founder. Peter Ramsey (Tony Randall) is determined to get more involved in the firm's operations, even though he's a coward with a spine of jelly. When Carol files a complaint with an ad board, Ramsey goes ballistic until Webster talks sense to him. To get around the board, Webster convinces Carol's prime witness, one of Webster's good time girls, Rebel Davis, to testify. Webster tells Rebel (Edie Adams) he'd been planning to use her for a brand new campaign, only there is no such thing. He shoots commercials for the nonexistent product VIP only to have Ramsey buy multiple ad time for the fraud.

Determined not to be beaten by Carol, Webster gets Nobel Prize-winning scientist Dr. Linus Tyler (Jack Kruschen) to come up with something that can become VIP. Tyler is a bit of a recluse who stays in his basement lab and despises humanity. When Carol catches wind of it, she's determined to steal the VIP account from Webster, only when she goes to see the scientist, she instead finds Webster. 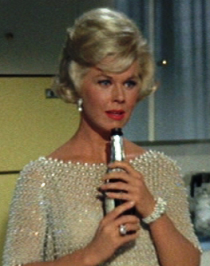 Having no idea what Tyler really looks like, she accepts it as fact as Webster pretends to be the scientist to stall Carol. Once the charade begins, that's when the reading between the lines hits hyperdrive. Webster's Tyler is less a recluse than a shy man, unschooled in romance and the opposite sex. When Carol decides to hide him out in her apartment (under the pretense of keeping him from Webster), the innuendo gets to a hysterical level. Just a few samples of the lines the fake Tyler offers up: "Now you know why I'm afraid to be married, I'm afraid to be a failure." "What does a kiss mean? It's like being able to light a stove, it doesn't mean I know how to cook." "You deserve a man, not a mess of neurotic doubts." "I'd trade all my knowledge to learn one thing — how to make a woman love me!" The scene also ends up being hysterical as Day performs what is essentially a pantomime as a song asking whether "to surrender to love" plays. Carol has said before that alcohol undoes her, but she shows that she's ready for love herself as she brings out the champagne. No, nothing phallic in this screenshot.

The supporting cast is full of reliable fun including Ann B. Davis, Joe Flynn and the aforementioned Kruschen. There is even the running gag of two businessmen (Jack Albertson, Jack Oakie) who always spot Webster with various women and are green with envy. When circumstances force Webster to don a full-length fur coat, the pair comment that he's the last guy they'd ever expect to go that way.

The title of this post comes from what the real Dr. Tyler invents as VIP. It appears to be a mint, but it's really pure alcohol, prompting all who gobble them down to get sloshed, and no one does this better than Randall.

As I said, Lover Come Back isn't nearly as good as Pillow Talk, but director Delbert Mann keeps it moving fast and furious and it never stops entertaining. There is just one thing that doesn't fit to me and that's the title: Lover Come Back doesn't really seem to have anything to do with the story. Then again, there are lots of things hidden here, so maybe its meaning is as well.

Comments:
there is a bigger triumph of innuendo; hudson/day/randall's next outing send me no flowers

this one has hudson & randall cruising potential partners for day when a hypochondriac hudson thinks he's dying, and goes into gay overdrive when they set their sights on the great hunk o' man clint walker

To me, this is basically just a retread of Pillow Talk with dirtier jokes - it's essentially the same plot - and I thought it was better the first time around. Randall steals the film and should have been nominated.

Josh R - True. But there is something almost transcendentally meta in the line "He's the last guy in the world I would have figured." I am grinning just as I write this, in fact...

LOVER COME BACK is a retread of PILLOW TALK with dirtier jokes. Which is why I like LOVER COME BACK more. The wit is a lot more sharper and filled with more innuendos.

And by the way, Hudson's character in LOVER COME BACK has a better reason to deceive Day's character with a false identity than he did in PILLOW TALK. At least I thought so.