BLOGGER'S NOTE: Welcome for the first time as a contributor the inimitable Odienator, who many of you may know from his great offerings at The House Next Door.

By Odienator
Since the inception of the Academy Awards, actors and actresses have received nominations for less than stellar work. Occasionally they win. Meanwhile, these same actors and actresses go unnoticed by Oscar for some of their best work. There are plenty of reasons for these omissions, valid and not, but these do not concern 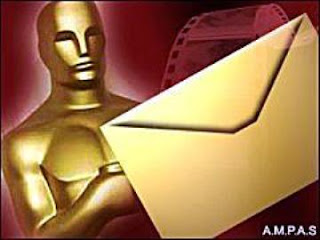 Odienator's Oscar Exchange Program (OOEP). Like the toys for guns program, we will take your Oscar nominations with no questions asked, and we will exchange them for an Oscar nomination for the better performance of your choice. You can exchange a supporting performance for a lead or vice versa, and if you're as noble as we think Hollywood types are, you can even exchange a nod that resulted in a win, especially if you feel another actor was robbed by that win. Unless you're Jaye Davidson, Dustin Hoffman or Felicity Huffman, you cannot exchange the gender of the nomination. Other than that, come on down and let's make a deal.

Below, the proprietor of OOEP put together a wish list of some performers we hope to see at our service counter.

Comedy nominations are few and far between, but Spacek should turn the one she received for this Southern-fried episode of The View for her simple, understated turn as Richard Farnsworth's mentally challenged daughter. It is perhaps the nicest David Lynch has ever been to a female character, and Ms. Spacek is the recipient of one of the director's most hauntingly beautiful long takes. 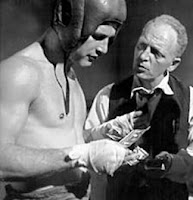 PAUL NEWMAN
Exchanged: Actor win for The Color of Money
Received: Actor nod for Somebody Up There Likes Me
Newman should have done a George C. Scott and rejected his Oscar for this dismal performance, a pale shadow of his Fast Eddie performance in The Hustler. Even though the nod put him in the same company as Bing Crosby in terms of being nominated twice for the same character, it is one of Newman's rare botches. Since Newman's received Oscar nods for playing real life characters and/or throwing punches (see The Verdict for the best punch he ever threw onscreen), why not exchange a nod for one of the first movies in which he did both? Plus, he's good too.

KATHARINE HEPBURN
Exchanged: Actress win for Guess Who's Coming to Dinner
Received: Actress nod for Bringing Up Baby
One would think Hepburn should exchange the nod for her hideous turn in Suddenly, Last Summer, but in giving up Dinner, she gives Mrs. Robinson, Bonnie Parker, or that fellow Hepburn, Audrey, the chance to get the award she robbed from them. 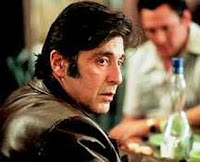 AL PACINO
Exchanged: S. Actor nod for Dick Tracy
Received: S. Actor nod for Donnie Brasco
The less said about Dick Tracy, the better, except for the fact that Disney tried selling those banana yellow trench coats at J.C. Penney. Nobody bought them, not even pimps. As one of Tracy's nemeses, Pacino, under a gallon of latex makeup, makes Rod Steiger look restrained. In Donnie Brasco, Pacino's rundown mobster is his take on Ratso Rizzo — a 180 degree turn from his more famous organized crime figure. The quiet resignation of Pacino's last scene is enough to make this a worthwhile exchange.

In both films, Lange plays lousy mothers, but her redemption in Leave is far more believable than any moment of Blue Sky. Sometimes the Academy gives little gold men to the actor who chewed the most scenery without exploding like Mr. Creosote; Lange flosses her teeth with the scenery in Blue Sky.

In Men Don't Leave, she breaks your heart by turning in a '40s woman's weepie performance that Wyler or Cukor would have been proud to direct. 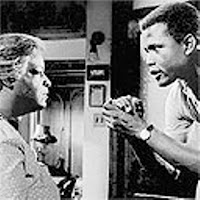 SIDNEY POITIER
Exchanged: Actor win for Lilies of the Field
Received: Actor nod for A Raisin in the Sun
Lilies of the Field is a nice little movie, but hardly a stretch of Poitier's talent. His take on Walter Lee Younger, the role he played on Broadway in Lorraine Hansberry's classic play, is a journey through a myriad of emotions — anger, joy, regret, resentment and passion — and a testament to Poitier's thespian powers. Rarely did we get to see Poitier drawn this complexly onscreen. History was made with his Lilies win, but if history could be rewritten, he might have won for Raisin instead.

Tomorrow, a look at some overlooked performances that deserved Oscar nominations.

Comments:
I'm no fan of Dick Tracy, but I think if any Al Pacino nomination needs to be exchanged for something else it's his embarrassing win for Scent of a Woman.

also: thanks for the props for MEN DON'T LEAVE. According to me, a non-fan of Lange (so tifwiw) it's her best performance, period.

EC, if Scent of a Woman didn't exist in its Pacino remake incarnation, I wouldn't have a Pacino imitation!

I don't think Pacino should have won--that Oscar was Denzel's--but I did not have a problem with the nomination. The movie was #10 on my ten bests that year. Dick Tracy was just terrible all around, except for those Sondheim songs Madonna sang. I remember at the Oscars that year, Madonna rubbed her ass and hips so many times while performing Sooner or Later that I expected her to catch fire from the friction. "Madonna ass-rubbing burns down theater," says the local newscaster. "Details at 11."

Nathaniel, I have been a fan of Lange in the past, and I have to agree with you on Men Don't Leave being her best work. I remember watching it on VHS, and when it was over, I rewound it and watched it again. As I said at the House Next Door, I cried my eyes out. It's the kind of movie I used to watch with my Mom when I was a kid--except Barbara Stanwyck would have been in it.

Looking at the past, I'd exchange Paul Muni's win for Louis Pasteur for a nod for Scarface.

I would suggest exchanging Henry Fonda's victory for ON GOLDEN POND with a win for GRAPES OF WRATH; thus freeing up the 81's Best Actor Oscar for another beloved veteran: Burt Lancaster in ATLANTIC CITY.

I'd trade both of Cary Grant's nominations, for Penny Serenade and None But the Lonely Heart (both soppy melodramas) for his incandescent comedy turns in Bringing Up Baby and His Girl Friday. Speaking of the latter, how was Rosalind Russell nominated for an earnest little biopic like Sister Kenny, while her Hildy Johnson was ignored? Kathleen Turner did what she could with the silliness of Peggy Sue Got Married, but she was infinitely more deserving of a nomination for Body Heat. Audrey Hepburn was nominated in 1967 for Wait Until Dark, but was much better in that same year's Two for the Road. Jean Simmons received her only Best Actress nomination for a dull piece of tripe called The Happy End, but Elmer Gantry still stands as her career-best work. Bette Davis was rather poorly served by the campiness of The Star, for which I'd substitute her galvanizing turn in Of Human Bondage. The fact that James Cagney was nominated for Love Me or Leave Me but not for White Heat is still baffling. Margaret Rutherford won an Oscar for her forgettable cameo in the glossy The V.I.P.s, while her sublime clowning in Blithe Spirit was infinitely more deserving of a Supporting Actress prize. And Kathy Bates did Stephen King prouder in Dolores Claiborne than in Misery. I could go on and on and on....

Josh: And Kathy Bates did Stephen King prouder in Dolores Claiborne than in Misery. I could go on and on and on....

I love Bates in Misery, but agree with you about Dolores Claiborne (the cin-tog in that movie is awesome, especially in that flashback scene that makes Bates look shockingly radiant). I hated the Jennifer Jason Leigh addition to the film, but Bates was perfectly cast yet again. I'd go even further to say Judy Parfitt deserved an Oscar nomination as well.

I completely forgot Cagney was omitted for White Heat. And isn't The Star where Davis says "Come on Oscar, let's get drunk!?" If I ever win an Oscar, that'll be my acceptance speech.

Tina, I will be spending all of next week working in Durham, NC. If Annie Savoy can't get an Oscar, she can at least get an Odie.

Even though he won for it, I'd swap Tim Robbins' nomination for Mystic River for either Bull Durham or The Player.

Ingrid Bergman -I'd exchange her win as supporting actress in Murder on the Orient Express for a nomination as lead actress in Notorius.