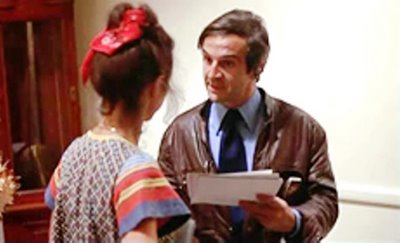 By Edward Copeland
"What is a director?" Ferrand (François Truffaut) asks himself at one point in Day for Night. He settles on the definition of someone who solves problems but I think a better definition is someone, such as Truffaut, who really loved movies. Re-visiting Day for Night, it still plays for me as one of Truffaut's lighter confections — good but not up to his greats such as The 400 Blows or Jules and Jim.

One thing that can't be disputed about Day for Night though is that it may well be the loveliest valentine to filmmaking itself ever put on film. Sure, there are the backstage affairs and doings circling the production, but the film's true romance is with the process of moviemaking and to the directors Truffaut admired from Welles to Hitchcock to Hawks to Bresson to Rossellini and others.

The performers all turn in fine performances, but it's easy to see how Valentina Cortese stood out as the aging actress Severine and snagged an Oscar nomination for best supporting actress as a result. She truly is great, despite her limited screen time.

Really, I can't think of another film about filmmaking that's really as sweet as Day for Night is. It's not an overheated melodrama such as The Bad and the Beautiful or one of the many satirical takes from the great (The Player) to the mediocre (Living in Oblivion).

In a way, even though Robert Altman made The Player, Day for Night plays more like one of his 1970s efforts: Plot isn't a priority, just observation of characters and moments among a large cast. Day for Night truly is Truffaut's mash note to cinema itself and it certainly passes the time enjoyably, even if it doesn't reach the heights of his greatest films.

Racking my brain to try to remember films that concerned themselves as much with the actual process of filmmaking, the film which I kept coming back to was Richard Rush's The Stunt Man, certainly a more satirical take but one that does concentrate on the details of filming itself. I'm sure I'm blanking on others, but perhaps you silent commenters out there can step up to the plate and remind me of the ones I'm forgetting.

Comments:
David Mamet's State and Main is the one that immediately springs to mind. Also, Blake Edwards' S.O.B. would probably qualify.

I forgot about State and Main, but I'd lump S.O.B. in the more satirical vein.