From the Vault: Wild at Heart

BLOGGER'S NOTE: Twenty years ago today, Wild at Heart opened. Here is the review I wrote at my college newspaper upon its opening. 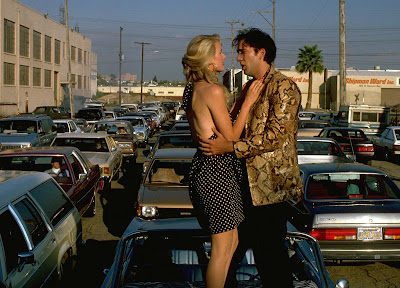 When the 1990 entertainment yearbook is written, it should say that David Lynch single-handedly saved the year from being completely drowned in mediocrity. He and Mark Frost helped raised the quality of television with Twin Peaks and Lynch himself has given a boost to the movie year with Wild at Heart.

Wild at Heart tells the road story of Sailor Ripley (Nicolas Cage) and Lula Pace Fortune (Laura Dern), two young lovers trying to overcome the many obstacles to their love, most of which have been placed there by Lula's evil mother Marietta Fortune (Diane Ladd).

Other than that, characterizing this wickedly funny film by its story becomes a fool's errand other than to say it resembles a dark, demented version of the type of films the minds behind Airplane! make. Lynch throws in every strange and silly thing he can think of, achieving the film equivalent of a nonsequitur.

Lusciously filmed and edited, Angelo Badalamenti's score builds suspense and adds a humorous edge to some of its toughest scenes. Wild at Heart isn't designed for everyone, but it is Lynch's most successful screen venture to date. Blue Velvet grows on you, but it's overrated and never balances its abrupt shifts in tone.

With the exception of a few horrifying scenes, Wild at Heart pulls it off since it's clear that it's not meant to be taken too seriously. Cage — who seems to alternate good performances with annoying ones — submits a completely original characterization.

Ladd gets her best role in years as the malevolent mother worried more about her own fate than her daughter's happiness.

Dern, Ladd's daughter in real life, also shines, unlike in Blue Velvet where she was one of that film's weakest elements.

Lynch's direction moves at a brisk pace, never letting the audience stop to breathe long enough to realize they are watching a 2 hour, 17 minute movie. The Elvis-like Sailor wears a snakeskin jacket which he calls "a statement on his individuality and of his belief in personal freedom." Wild at Heart serves as Lynch's cinematic snakeskin jacket.

Lynch's vision on both big and small screen is unlike anyone working today, testing the limits of what can be accepted and what is acceptable. The movie, while very violent and sexual, often borders on excess, but Lynch pulls it off because he knows exactly where he's aiming. A major motif turns out to be The Wizard of Oz, with characters constantly comparing themselves to Dorothy and the gang. If forced to place a meaning on this film, I guess it is the difficulty in finding your way home to happiness.

Looking for meaning in Wild at Heart isn't the attitude one should take into the theater. Instead, audiences should allow themselves to venture into the bizarre and disgusting world that Lynch has conjured.