From the Vault: Jefferson in Paris 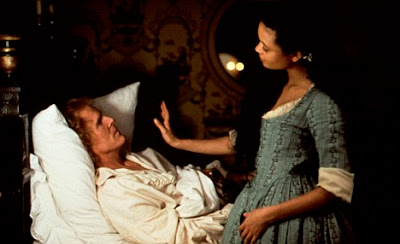 All great artists slip from time to time and the Merchant Ivory team proves to be no exception with Jefferson in Paris, a plodding and structureless mess about the U.S. founding father's ambassadorship to pre-revolutionary France.

Though meticulously researched, Jefferson in Paris operates under the assumption that the widely told tale of the widowed Jefferson's affair with a young slave he owned is true and that the union with Sally Hemings produced several children.

A typical and ultimately fruitless framing device sets up this assertion, opening in the late 1800s with a man claiming to be a descendant of Jefferson and Hemings (James Earl Jones) telling his story to a reporter. The film never makes it clear how Jones' character should know about the lengthy first section of the film which details Jefferson's flirtatious attraction with Maria Cosway (Greta Scacchi), the Italian-English wife of noted painter Richard Cosway.

The film itself is so cold and dry that it hardly makes anything clear. It's amazing that the talented cast, including Jones, Scacchi and Nick Nolte as Jefferson, escape unscathed, let alone do impressive work.

The film's most welcome presence comes from Thandie Newton, star of the 1991 Australian sleeper Flirting. She infuses Sally with an energy and style that keeps her from becoming a caricature of a slave. Once she arrives late in the film, its as if the entire production has been given a jolt with a defibrillator.

The debate over the assumptions Jefferson in Paris makes are best left to the historians. Besides, facts didn't stop Oliver Stone from making JFK entertaining.

In the case of Jefferson in Paris, the story doesn't tantalize, it wanders and bores. Aside from occasional bursts of solid acting or nice sights, this lethargic film even manages to make the French Revolution seem rather routine.

As with previous Merchant Ivory efforts, the film offers immaculate technical credits and exquisite costumes. Unfortunately, the excellent work behind the camera hardly makes Jefferson in Paris more a movie or less a postcard.