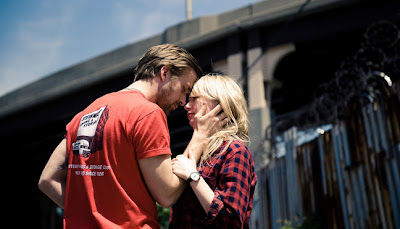 By Edward Copeland
I dread reviewing movies like Blue Valentine because I already anticipate the responses to my pan of this critical darling. Some will call me a contrarian (which I'm not — if I liked it, I'd admit it), others will misread my words, thinking I'm saying those who like it are dumb or have had the wool pulled over their eyes. Many of these comments will come from other critics who will forget the most important truism of criticism: all opinions are subjective. However, what makes me not look forward to typing my thoughts on Blue Valentine the most is that, it's not even the type of film you can have fun getting revenge on for wasting your time. Recalling it for a review just means reliving the experience and it was painful enough the first time.

Now that I've decided to leap in anyway and dredge up my memories of Blue Valentine, I'm filled with sadness. It's not because that's what much of director Derek Cianfrance's film aims to elicit from the viewer as it charts the rise and fall of the relationship between Dean and Cindy (Ryan Gosling, Michelle Williams) (not necessarily in that order). No, it's because I know that Gosling and Williams have talent and it's being abused here.

It seems even more tragic in the case of Williams (though I guess her undeserved Oscar nomination will help take the sting out), who seems to be drawn to roles in bad indie films such as this one. Is this masochism on her part? Not only does Blue Valentine provide her with a poorly written character that, though quite different from Wendy from Wendy and Lucy, seems to force her to play the same notes she hit in that similarly overpraised indie. In fact, early in Blue Valentine, when Cindy starts making photocopies of the family's missing dog, I actually started experiencing flashbacks to Wendy and Lucy as if I suffered from a form of post-traumatic stress disorder. Two wildly hyped and unjustifiably acclaimed films striking me simultaneously. Almost more than I could bear.

What made me feel worse for Williams sort of goes with the old line about actresses saying they'd only do nudity if it were integral to the story. Much was made ahead of Blue Valentine's release about how they barely avoided an NC-17 because of the sex scenes between Williams and Gosling. Now, in no respect could you call me a prude nor do I mind seeing Williams in the altogether, but for all the hype, the vigorous humping the actors simulate ranks among some of the dullest movie sex scenes I've seen. As with most of Blue Valentine, it's porking without a point.

Since the movie jumps around to various points in the couple's relationship, it's not as if the sex really reflects the relationship's state at that time: It's neither lustful nor romantic, obligatory nor forcible. Most importantly, nothing seems intimate about it. It's not often that I refer you to a comment in another review, but since it's by my faithful contributor Josh R, I will. Go read his comment on the difference between how Gus Van Sant depicts gay sex in Milk versus how Ang Lee does in Brokeback Mountain (which had a very good performance by Williams) on my review of Milk and he explains exactly how I feel about the sex in Blue Valentine comes off.

Williams deserves so much better. Just see what great work she turned in for her small role in Scorsese's Shutter Island and it shines a big bright light on what little she's given to work with in this film. In Blue Valentine, as in Wendy and Lucy, it seems as if she's intent on creating the cinematic equivalent of slashing her wrists in attention-grabbing but ultimately harmless suicidal gestures. If she continues on this path, I fully expect to see her in a role carrying The Bell Jar or starring in a remake of The Hours.

Which brings me to Gosling, whose problem in Blue Valentine, other than the same bad script by director Cianfrance, Cami Delavigne and Joey Curtis, is one of his own making. Gosling has shown before that he can deliver very good performances as he did in Half Nelson . Unfortunately, he's also displayed a tendency to substitute actorly tics, quirks and gimmicks as a substitute for actually creating three-dimensional characters. For example, see Lars and the Real Girl.

He strongly displays the Lars scenario here. OH BOY, does he do it here — tenfold. He makes Dean such a collection of artificial traits that I doubt blood flows in his veins since he's obviously been built from a kit and doesn't resemble a human being. The blowup doll in Lars and the Real Girl was more lifelike than Dean. No wonder Dean and Cindy's marriage falls apart so quickly. I don't know how Cindy lasted one night with this manufactured oddball, let alone a few years. Gosling goes so eccentrically over the top that he makes Brando's work in Island of Dr. Moreau seem subtle.

So with Blue Valentine we have another example of a 2010 film where its cast (and Gosling and Williams are essentially the only characters who matter except for John Doman in the small role of Cindy's father that just made me wish I were watching The Wire) draws more attention to a film that would otherwise fade into deserved oblivion. Except in the case of something such as The Kids Are All Right, that film's entire ensemble turns in such excellent performances that they help compensate for its hackneyed, predictable screenplay. There's no such luck for Blue Valentine which strands Williams at sea while Gosling rollicks in some twisted land of awful, mechanical Method Acting.

Williams should be grateful that enough Academy members apparently dislike Julianne Moore, fell for the category fraud of Hailee Steinfeld being supporting in True Grit and didn't see or remember Tilda Swinton in I Am Love to allow Williams to get a best actress nomination. Then again, they also nominated Nicole Kidman's icy work in Rabbit Hole, which I'll review later in the week, so maybe they were just filling in names and didn't actually see Blue Valentine or Rabbit Hole. (We do know at least the costume designers branch saw I Am Love.)

Plenty of great films have depicted decaying relationships and marriages, but Blue Valentine doesn't come close to joining that list. Some critics even had the gall to compare this film to the work of John Cassavetes. Blue Valentine doesn't even rise to the level of John Hughes and if you are a close reader of my reviews, you know what an insult that is.