A few words about Lars 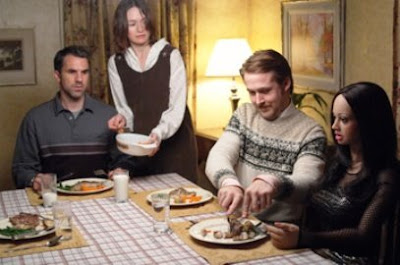 By Edward Copeland
"Whimsical." "Touching." "Funny." Those were some of the adjectives pulled out of reviews for quotes to praise Lars and the Real Girl, the film that inexplicably received an Oscar nomination for best original screenplay and that I just now caught up with on DVD. Here are my alternatives: Mannered. Ridiculous. Excruciating. Unbearable.

I have liked Ryan Gosling in roles before but he is all tics here to the point that I was just hoping at some point someone would slap him silly. What's even worse is that the portrayal of the town his character lives in and its willingness to indulge his delusion that the sex doll he purchased over the Internet is a real person goes beyond straining credulity.

Aside from a few moments where his brother (Paul Schneider) expresses true concerns about Lars' mental health, everyone seems to think that nothing is out of the ordinary, prompting me to think that perhaps the entire community belongs in an institution.

How anyone could mistake this film for a comedy (or a movie for that matter) is beyond me. It drags on and on and on.

In the end, the doll, Bianca, may well be the most realistic and well-formed character in the entire charade.

Comments:
For most of it, it did seem like these people need more help than Lars does, because he was just probably indulging a romantic need he wasn't getting and taking it a bit far. But then, for some reason, it starts getting heart-warming and beautiful in the last 20 minutes. Or at least for me.

And personally I find weirdness in people thinking Gosling was so great. I just didn't see it, just like I didn't in Viggo Mortensen in EP. Emily Mortimer, though, was robbed of awards attention. She was the best thing about it and for the most part, the only thing grounding it in reality. The "We do it for you!" scene is such an easy Oscar clip.

This one falls under the "either you buy into the gimmick, or you don't" ruling.

I fell for it, with reservations. Gosling did fall back too often on that goofy smile, the one so neatly underlined by his moustache.

Still, the Oscar nom was a head scratcher -- but what I took away from the film was that he was using this RealDoll to bridge his entry back into society. Without it, he couldn't socialize with people ...

Maybe I'm giving it too much credit!