Beware the Moon and Stick To the Road 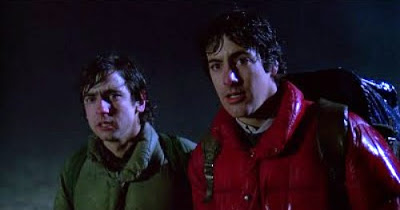 By Damian Arlyn
1981 was a seminal year for werewolf movies. First, Joe Dante's The Howling hit theaters in April followed by Michael Wadleigh's Wolfen in July and, finally, John Landis' An American Werewolf in London in August. It is the latter title with which this article will be concerned, primarily because today marks the 30th anniversary of its release but also because, in the opinion of this critic, Landis' picture not only is the best of the three werewolf films released that year but, arguably, the best werewolf film ever made. I still remember the first time I was exposed to it. I was no older than 10 and for some strange reason my parents thought it would be appropriate for me to watch. They changed their minds shortly into the film and promptly sent me to bed, but by then it was too late: the damage had been done. Though I wouldn't see the film in its entirety until years later, that opening sequence where two young Americans hikers get attacked by a vicious beast while walking through the English countryside at night had been permanently etched in my memory. To this day, it is one of the most terrifying sequences I've seen on screen and I've had many a nightmare because of it.

What makes An American Werewolf in London work so beautifully (besides how effectively scary it can be), is its tongue-in-cheek sensibility. It is commonplace to see humor blended with horror in movies nowadays but back in '81 it was far more outré. The comedy manifests itself in many different forms…such as in Landis' choice of music. He brilliantly peppers the soundtrack with classic songs that feature the word "moon" in the title ("Bad Moon Rising," "Moondance" and "Blue Moon"), thus underscoring the absurdity of many of the things 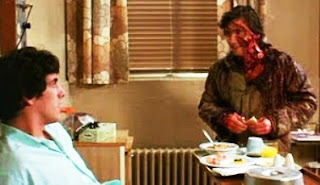 being depicted onscreen. For example, during the now iconic transformation scene while the character David (David Naughton) thrashes about on the floor as his body slowly and painfully changes into a werewolf, we hear one of the three versions of "Blue Moon" used in the film playing in the background. The juxtaposition of the sweet and the sickening makes for a simultaneously scary and funny (not to mention incredibly memorable) sequence. Even the characters themselves comment on how ridiculous many of the things they're experiencing are. When David's friend Jack (Griffin Dunne) returns from the dead to inform David that since he will soon become a werewolf he must commit suicide, David says he will not be threatened by a "walking meatloaf"…an epithet which he later apologizes for during his metamorphosis (incidentally, throughout the course of the film every time Jack appears to David he does so in increasingly decaying forms; it is both gruesome and hysterical).

In fact, many of the lines in the film clearly are designed to poke fun at the bizarre goings-on in the story. "A naked man stole my balloons"; "Have you ever tried talking to a corpse? It's boring."; and "Sean, I think there are some hooligans in the park again" are just some of the many gems to be found in the film's dialogue. My personal favorite comes when David realizes he truly is a werewolf and thus attempts to get himself arrested, spouting off the kind of horribly irreverent nonsense that every typical American thinks would offend his uptight British neighbors ("Queen Elizabeth is a man! Prince Charles is a faggot! Winston Churchill was full of shit! Shakespeare's French!"). It is impossible for me to watch the film and hear David's anti-English rant without laughing out loud. Landis also does something that was relatively new for its time. Much as Wes Craven did years later in the first Scream, Landis populates his horror film with characters who have actually seen other horror films. When David talks to his girlfriend (Jenny Agutter) about Claude Rains and Lon Chaney Jr. in 1941's The Wolf Man, it may not be the first example of meta-cinema in a scary movie, but is a rare (for its time) case of movie characters acknowledging that their lives seem to resemble the trappings of a horror movie.

However, the laughs (of which there are plenty) that the film provokes do not in any way lessen the impact of the horror scenes. If anything, they just throw them into sharper contrast. The atmospheric opening section of the film, a suspenseful foot chase through the underground tunnels of Tottenham Court Road tube station (where the camera adopts the POV of the wolf, though it is never actually seen except briefly from a distance 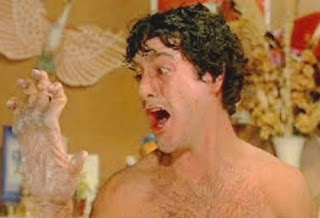 in the scene's penultimate shot) and especially some horrific nightmares experienced by David after he is bitten are all frighteningly visceral sequences. And, of course, there is the aforementioned extended transformation scene where another stellar element of the film is highlighted: namely, the superb special effects. Landis' idea was that David's change into the werewolf would be more traumatic than simply growing hair (through a cheesy optical dissolve) and then howling at the moon. It would be a more "realistic" transmogrification involving skin stretching, bones popping and cracking, cries of sheer agony and it goes on for quite a while. Landis does not let his character off the hook with a quick conversion. He also does not conceal his effects in shadows. He has it take place right out there in the open, harsh light. Nowadays the scene would be done with CGI. In the '80s, they had to use physical effects that took a great deal of time and labor to produce (often for only a second of a half of screen time). Still, the scene and the movie is the better for it. Naturally Landis owes a lot to the genius of the great Rick Baker (who also consulted on the makeup effects for The Howling). Baker's work for the film was so magnificent that it inspired the Academy of Motion Picture Arts and Sciences to create a new category for makeup (for which Baker received the first Oscar for this movie).

An American Werewolf in London opened to big box office success and generally positive reviews. It became known as a "game-changer" in the genre of horror and in particular in the makeup/special effects arena of said genre. It spawned a successful radio adaptation, a highly inferior 1997 sequel and is apparently set to be remade, proving yet again that Hollywood has completely run dry of ideas since they are remaking something that wasn't the most original concept when it was made. 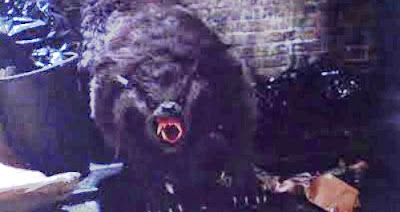 Comments:
Hear, hear. Fine appreciation of this modern classic of a film. AAWiL remains my favorite werewolf story -- and I say that with no disrespect to Joe Dante's THE HOWLING. It seems those two vie for the latter-day title among genre fans all the time, and picking one over is enough the other open wars on the subject. They're both great, with different strengths and takes toward the werewolf legend. But, I can't quibble on the one that still holds me to this day: John Landis' An American Werewolf in London. Fine appreciation, Damian. Thanks.

Excellent article. Tonight at 9:00PM EST, the authors of "The Werewolf's Guide To Life: A Manual for the newly Bitten" are hosting a LiveTweet of "An American Werewolf In London," honoring it's 30 year anniversary. Join the conversation by following @Werewolf_Guide on Twitter, or searching by the hashtag #AWIL30.

BTW, I gave you and Ed a shout-out for this tribute post, Damian. Thanks, again.

Thanks, le0pard13 and Ritch. Thank you both for your kind words. And Leo (May I call you "Leo?"), thanks for the shout-out. I appreciate it.