“This is Duke Mantee, the world-famous killer…and he’s hungry!” 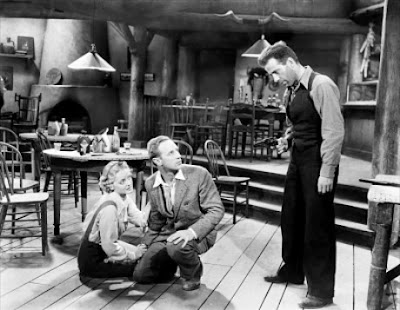 By Ivan G. Shreve, Jr.
As the star of the hit Broadway play The Petrified Forest, Leslie Howard also had in his possession (as co-producer) the production rights to Robert E. Sherwood’s stage smash…and Warner Bros., was quite keen on bringing Howard’s triumph to the big screen. The studio wanted the actor to reprise his stage role as Alan Squier alongside contractee Bette Davis, with whom Howard had previously worked on Of Human Bondage (1934); a critically and financially successful vehicle that cemented Davis’ future success in the movie business.

For the role of mobster Duke Mantee, the antagonist of the play, Warners wanted their resident gangster thespian Edward G. Robinson — but Howard insisted that the studio cast the performer that originated the part on stage; an actor who had previously worked at the studio in films and answered to the name of Humphrey Bogart. The studio bosses were hesitant…but relented when Howard informed them that without Bogie he wouldn’t be doing the film either. Seventy-five years ago on this date, Howard proved to the studio his instincts about Bogart were on the money when Petrified Forest was released to movie screens and ignited the film career of one of moviedom’s best-known tough guys.

Bogart’s foray into movies began six years before the release of Forest with an appearance in a Vitaphone short entitled Broadway’s Like That (1930), and that same year he signed a contract with Fox that provided him his first feature film exposure alongside Spencer Tracy in the John Ford-directed comedy-drama Up the River. By and large, however, Bogie didn’t make too much of a stir in films, and often found himself shuttling back-and-forth between the picture business and the stage, on which he had been an active participant since 1922. Bogart had become frustrated with moviemaking by 1934, feeling that his ambition to become a leading man onscreen was destined to wither and die on the vine. He could, when not unemployed, fall back on stage work and after appearing in a production of Invitation to a Murder producer Arthur Hopkins hired Bogie for the part of on-the-lam gangster Duke Mantee in the production of Robert Sherwood’s new play, The Petrified Forest.

Hopkins had reservations about Bogart at first: Bogie’s stage rep was, in Hopkins’ words, “as an antiquated juvenile who spent most of his stage life in white pants swinging a tennis racquet.” Author Sherwood had based the character of Mantee on 1934’s “Public Enemy No. 1,” John Dillinger — and because of his physical similarity to Dillinger, Bogart was a natural for the part. Bogie upped the ante in portraying the role by studying film footage of the gangster and mimicking Dillinger’s mannerisms. Forest won Bogart the best reviews of his career at that time, and after the movie version came out the actor himself remarked that Forest “marked my deliverance from the ranks of the sleek, sybaritic, stiff-shirted, swallow-tailed ‘smoothies’ to which I seemed condemned to life.”

The Petrified Forest takes place inside the Black Mesa Diner in a remote area in northern Arizona, a garage/eatery run by Jason Maple (Porter Hall), his daughter Gabrielle (Davis) and “Gabby’s” curmudgeonly grandfather “Gramp” (Charley Grapewin), who proudly tells all and sundry of the time Billy the Kid shot at him…and missed. Gabrielle’s mother, whom Jason married during the First World War, lives in France but still corresponds with her daughter, sending her books of poetry on her birthday. Gabby’s mother grew weary of life on the desert and her husband (calling him “a dull defeated man”), which is why she retreated back to the land of her birth; Gabrielle herself has inherited her mother’s free spirit, painting in her spare time and fending off the advances of the unimaginative males who seem to populate the diner, notably former gridiron hero and now gas pump jockey Boze Hertzlinger (Dick Foran).

Into Gabrielle’s life walks Alan Squier (Howard), a failed author-turned-alcoholic drifter who stops by the Black Mesa for a meal and soon finds himself captivated by Gabby’s independent and artistic temperament. His attention paid to Gabrielle arouses Boze’s jealousy, but he assures Boze that he’ll be moving on and manages to cadge a ride to a destination in Phoenix with a wealthy couple, the Chisholms (Paul Harvey, Genevieve Tobin) and their chauffeur Joseph (John Alexander). The Chisholms’ automobile is stopped en route by Duke Mantee and his gang, who are fleeing the police after a shootout in Oklahoma City. Mantee and his boys commandeer the car in which Squier and the Chisholms were traveling, and while Chisholm and his chauffeur futilely attempt to start the automobile abandoned by the Mantee gang, Alan takes off on foot for help.

Squier arrives back at the diner to warn Gabrielle of his encounter with Mantee and Company but learns that the gang has already arrived and Mantee will be holding the diner’s denizens hostage until a second car with three other members of his gang and his girlfriend arrives to rendezvous. The group are eventually re-joined by Mr. and Mrs. Chisholm and Joseph, who have made their way back to the establishment through a snowstorm, and a tense situation grows more so when Boze’s attempt to overpower Mantee earns him a slug in his shoulder.

As Gabrielle attends to Boze’s wound, Alan makes a proposal to Mantee: he asks Duke to shoot and kill him before he leaves, since he’s planning to sign over his insurance policy to Gabrielle (with the Chisholms as witnesses) so that she will have the funds needed to leave Black Mesa and travel to France to be reunited with her mother and live out her dream as an artist. Mantee agrees to Alan’s request, and as the police begin to close in the gangster shoots Alan before being gunned down himself. Alan expires in Gabrielle’s arms, and she vows to bury him in an area where old redwoods have ossified into stone — the “petrified forest” of the film’s title.

The Petrified Forest, with its themes of crime and social realism, was an ideal property for Warner Bros. to adapt to film, as the studio had made its reputation as a producer of gritty actioners tinged with the social commentary of the day. It was a big success for the studio…and for Bogart as well — but despite such a prominent part in an “A” picture he would soon find himself typecast as snarling, sneering gangsters in a variety of programmers and B-pictures. Bogart’s now-iconic image as a cynical, wise-cracking hero would not take hold until the early 1940s with legendary productions such as The Maltese Falcon (1941) and Casablanca (1942).

Though he was never shy about complaining on being typecast in bad-guy roles, Bogart had an exceptional deference for Forest and his performance as Duke Mantee — a shining example of this was demonstrated when the actor agreed to reprise the role in a May 30, 1955 television adaptation of the play on the series Producers’ Showcase. (Playing the Leslie Howard role was Henry Fonda, and the part of Bette Davis’ character was essayed by Mrs. Humphrey Bogart, Lauren Bacall.) This performance and a guest appearance on The Jack Benny Show (from Oct. 25, 1953) would be the only two TV projects in which the actor participated before his passing in 1957. 1955 was also the year that Bogart appeared in what would be his penultimate film, The Desperate Hours — his character in that movie, Glenn Griffin, also holds people hostage (this time a suburban family) while on the lam from the long arm of the law. (Bogart was quoted as saying that Griffin was “Duke Mantee grown up.”)

Because of its dark subject matter and characters whose destinies seemingly cannot escape the heavy hand of fate (Mantee’s last words to Alan before shooting him are: “So long, pal…I’ll be seein’ ya soon”), Petrified Forest is considered by some critics to be an early example of what would later be known as film noir. These facets of the film and Bogart’s mesmerizing performance as Mantee immeasurably help a movie that sadly hasn’t held up as well as one would like — though I’m certainly not shy about admitting a bit of guilt by pointing out that I never particularly cottoned to Howard’s work as an actor and that I’m disappointed that Bogart doesn’t shoot him from the get-go to avoid all of Leslie’s irritating speechifying. (Then again, I get a tremendous amount of pleasure out of seeing the two men reunited in the following year’s Stand-In, so there may be another explanation for my lack of enthusiasm.) For a Bogart fan, however, Forest is must viewing — from the moment Duke Mantee is introduced onscreen, there can be no doubt that 75 years ago “a star is born.”

Comments:
I usually feel about Howard the way you do, but there are two films I've seen where he is really good: Pygmalion and The Scarlet Pimpernel. Other than those...