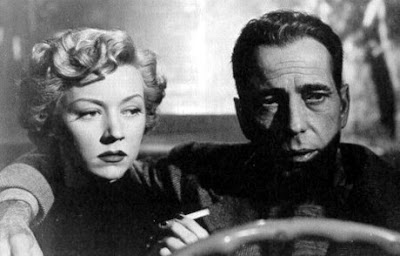 (Warning: possible spoilers contained within)
By Ivan G. Shreve, Jr.
When his feature film career took hold in the 1930s, Humphrey Bogart was the silver screen’s most reliable bad guy. He boasted a trademark snarl and callow ruthlessness that placed him in good stead to play an endless array of gangsters, and it was only on rare occasions that he was able to portray an individual on the other side of the law, notably in Marked Woman (1937) or B-programmers such as One Fatal Hour (1936) and Isle of Fury (1936). For a time, it looked as if he was forever destined to be gunned down in the last reel of every film he was in by the likes of James Cagney (1938's Angels with Dirty Faces, 1939's The Roaring Twenties) or Edward G. Robinson (1936's Bullets or Ballots, 1937's Kid Galahad).

With the advent of the 1940s, Bogie’s on-screen fortunes had undergone a swift and positive change. Movies such as The Maltese Falcon {1941) and Casablanca (1942) transformed him into — well, not necessarily a “hero” in the traditional sense, but more of an “anti-hero”; a cynical, world-weary type who “didn’t dip his bread into another man’s bacon grease” but stayed out of battles that didn’t concern him…until the problem became too big to ignore. He eventually put all those gangster roles behind him — or if he did tackle hood roles, it would be for comic effect such as in All Through the Night (1941) or tragic figures as in High Sierra (1941) and The Big Shot (1942).

But as a serious actor, Bogart began to chafe under these restrictions — and longed to land parts that would showcase his range. He demonstrated just how dark his dark side could be as Fred C. Dobbs in The Treasure of the Sierra Madre (1948), a role that may very well be his finest moment onscreen. The only other part capable of matching it is his remarkable turn as screenwriter (and accused murderer) Dixon Steele in Nicholas Ray’s In a Lonely Place (1950) — which celebrates its 60th anniversary today.

Adapted from a novel by Dorothy B. Hughes by Andrew Solt and Edmund H. North, Place starts out as the story of Dixon Steele, an ex-GI-turned-screenwriter whose attempts to make a post-war comeback have been hampered by a severe case of writer’s block — not to mention his cynicism toward the film industry and occasional bursts of violent temper. One night, he invites a hatcheck girl (Martha Stewart) back to his apartment to help him synopsize a novel he’s adapting for a screenplay — she departs not long after but later turns up murdered, making Steele the prime suspect. Fortunately for Dix, a female neighbor named Laurel Gray (Gloria Grahame) provides him with an alibi, telling the police that she saw the girl leave Steele’s apartment alone. Laurel falls in love with Dix, and proves to be a positive influence on him, inspiring him to churn out more script pages than he’s been able to produce in years.

The story then shifts to Laurel’s point-of-view; she begins to second-guess herself as to whether Steele might have been capable of such a violent act…not only after witnessing an incident in which Dix flies into a purple rage after a traffic mishap with a young man and beats him to a pulp, but suggestions from police Captain Lochner (Carl Benton Reid), Brub’s wife Sylvia (Jeff Donnell) and her masseuse-confidant Martha (Ruth Gillette). Steele also has a tendency to become insanely jealous without notice; and in the film’s climax he comes perilously close to strangling Laurel after he discovers she’s making plans to leave him. He’s brought to his senses by the ringing of the telephone, and is informed that the young girl’s boyfriend has confessed to her killing. But the damage has been done, as he is helpless to keep the one woman who brought him happiness from walking out of his life forever.

The movie version of Place is an excellent example of how it’s sometimes possible to improve on the written word; Hughes’ novel is a fairly run-of-the-mill whodunit but Solt and North’s adaptation flesh out the subject matter in so many ways. The chief improvement is in the ambiguous character of Dixon Steele: he’s a likable guy who looks out for his friends — police detective Brub Nicolai (Frank Lovejoy), agent Mel Lippman (Art Smith), besotted actor Charlie Waterman (Robert Warwick), whom Dix affectionately calls “Thespian” — and responds to phonies like Lloyd Barnes (Morris Ankrum) with biting sarcasm and, in the case of an obnoxious producer’s son (Lewis Howard), an impressive display of fisticuffs. He’s an individual you can’t help but root for — and yet, you wince when someone says or does something that’s guaranteed to set him off into one of his tirades again. (Steele’s hotheadedness is somewhat tempered by the fact that he’s willing to make amends once he’s cooled off; after administering a beating to the driver in the traffic accident, he arranges for a postal order of $300 to be sent to cover the cost of the paint job his car damaged.)

What’s even more impressive is the loyalty Steele inspires in his friends despite his tendencies to be a first-class jerk. When Sylvia Nicolai starts using amateur psychology and proclaims Dix to be “sick,” her husband is quick to correct her, arguing that his pal has “a superior mind.” And Dix’s agent explains Steele’s volatile behavior to Laurel — who’s having second thoughts about their relationship —by observing: “You knew he was dynamite…he has to explode sometimes.”

Always violent…well, it’s as much a part of him as the color of his eyes…the shape of his head…he’s Dix Steele — and if you want him, you gotta take it all…the bad with the good…I’ve taken it for twenty years…and I’d do it again…

Place can be a frustrating film since Bogart and Grahame make an adorable couple — and I realize as a longtime Grahame devotee I may be a tad biased, but I’ve never seen her look lovelier on film — whether it’s the two of them sharing a cigarette as they listen to a nightclub chanteuse (Hadda Brooks) sing and play piano or whether they’re lying in the sand and just enjoying each other’s company. But it isn’t long before Steele succumbs to jealousy or takes umbrage at some imaginary slight and you find yourself screaming at the screen: “Stop being such an asshole, Bogie!” Their love affair is truly one of the most tragic in the history of cinema, and I feel that one of the reasons why Gloria’s performance as the victimized Laurel is so effective is that the on-screen proceedings mirror her own volatile marriage to director Ray (the two were getting ready to divorce one another at the time).

Place was one of seven productions that emerged from Humphrey Bogart’s independent Santana Pictures Corporation (named after his beloved yacht) and with the possible exception of cult favorite Beat the Devil (1953), it’s the most successful (critically, not financially) film of the bunch and another movie that (though it has its devotees) deserves a wider audience. Expert direction, sharp dialogue (“Oh, I love a picnic…acres and acres of sand and all of it in your food.”) and offbeat secondary characters make In a Lonely Place a must-see for Bogart acolytes…it features one of his most outstanding performances.

Ivan G. Shreve, Jr. blogs at Thrilling Days of Yesteryear, and fervently believes that if John Garfield had been available to be cast alongside Humphrey Bogart in The Treasure of the Sierra Madre it would replace Casablanca as his favorite Bogie film.

Comments:
I've always loved this film, and saw it again last night, after which a websearch brought me to your piece on it, which I thought was great.
You're right- it IS a great Bogart performance, and a great turn by GG, and their love affair is truly tragic.
By the by, if you can name another movie which affectionately quotes the "I lived a few weeks while you loved me" line, you're a better man than me! I know for a fact the line was lifted, or "homaged" in another film, but for the life of me I can't remember where. I want to say a Billy Wilder movie, but I know that's not right.
Anyway, great piece on a great film.
John.