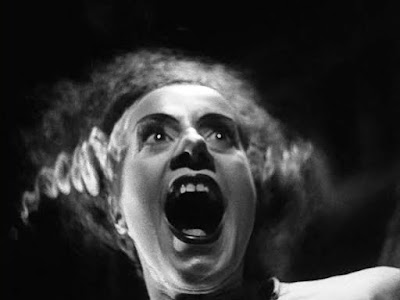 By Edward Copeland
Some films belong to a very exclusive club and James Whale's Bride of Frankenstein, which was released 75 years ago today, holds a membership card: sequels whose excellence actually exceeds the original.

Like a sequel to another classic horror film (though admittedly one with fewer defenders), Bride of Frankenstein resembles the path Texas Chainsaw Massacre 2 would take more than 50 years later, downplaying the fright in favor of frivolity. Now, as much as I love Texas Chainsaw Massacre 2, I don't mean to imply it's anywhere near the league of Bride of Frankenstein, because Whale's sequel is a masterpiece.

The humor starts in the very beginning with a funny prologue that finds Lord Byron (Gavin Gordon) marveling at an approaching storm with his friends, the Shelleys (Douglas Walton, Elsa Lanchester), and being surprised that the thunder and lightning can so frighten Mary when she produced as horrifying tale as the novel Frankenstein, even though she can't find anyone willing to publish it. Mary Shelley expresses her frustration that her book has been dismissed as merely a monster tale when she set out to tell a morality lesson of the punishment of a mortal man who chose to act as God. This leads to what would commonly be a "Last time on" summary on a television show that one rarely finds in movies. In fact, the only other sequel that springs to mind that ever did this was Superman II. (Since I originally wrote this, the second part of John Woo's Red Cliff also takes this approach.) 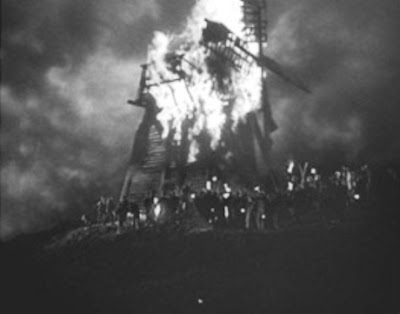 spin the tale of the sequel where the first film left off at the burning wreckage of the mill where the villagers cheer the flames, assuming the monster is dead and take an unconscious Henry (Colin Clive) back to his castle. Even though it undercuts her argument for the meddler paying for acting as God, at least he feels guilty about it. Compare that to the completely stupid ending of Steven Spielberg's Jurassic Park. I never read Michael Crichton's novel, so I don't know how it ended, but it's bad enough the film version ended with what seems like an endless shot of the survivors staring at each other in a helicopter as they get away, Richard Attenborough's character didn't suffer any punishment at all. Hell, they didn't even give us a throwaway shot of a T-Rex back on the island standing and screaming as they flew away.

I digress. Let's get back to discussing the good movie. While Frankenstein itself was quite a good movie, it's amazing how much more confidence Whale shows as a director in the follow-up. It moves at a breakneck pace and, like the original, is barely more than an hour long yet the viewer isn't shortchanged. Even in the credits, Whale lets his own name come out of the fog at a smaller size before revealing itself in full to the audience. Then Boris Karloff is credited solely as KARLOFF for his work and Lanchester's dual work as Mary Shelley and the bride isn't acknowledged since the bride's portrayer is depicted as a question mark, so even the credits serve as a platform for fun and experimentation. 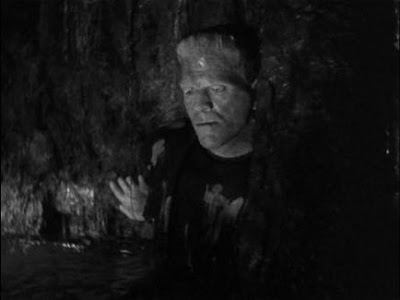 While much of the film definitely leans to the funny side, Whale doesn't completely omit the shocks and 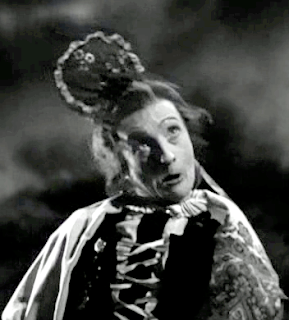 shudders moviegoers would have been expecting from the monster story, especially in the opening (helped by Franz Waxman's atmospheric and, at times, downright bouncy score). As the townspeople celebrate over the burning mill (including the great Una O'Connor as Minnie declaring that it's "the best fire ever") and the burgomaster ordering villagers to go back to their homes and relax, the parents of the young girl the monster accidentally drowned in the first film remain behind, determined to see the remains of the creature who stole the life of their little girl. Minnie even tries to convince them to let it be, but after she leaves, one wrong step plunges the grieving father into the mill wreckage. The slow appearance of the monster's hand from the shadows is one of the creepiest moments of the entire film and for Twin Peaks fans, the scene is tellingly witnessed by an owl. Still, viewers aren't left to settle in the scare mode for too long as after the monster frees himself from the wreckage and gets on the move once again, it's impossible not to laugh at how silent the previous bloodthirsty Minnie goes when she turns and sees the very not-dead creature hovering above her. O'Connor's performance provides a great deal of the comic relief in a horror film that almost survives by coming up with periods of horror relief to break up the laughs.

In reality, Karloff's moments as the monster are the main ones that do shy away from laughs as he deepens his alternately sad and menacing performance from the first film in this one, beginning to learn rudimentary speech and to understand what he is and what his place in the world is. His self-examination, something most of the main characters undergo here save the film's new and greatest creation, Dr. Pretorius (Ernest 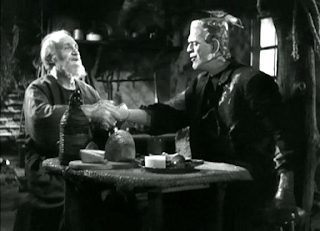 Thesiger), includes a moment when the monster sees his reflection for the first time in a stream. One thing I noticed upon watching the film again that I always forget is some of the Christ imagery they place upon the monster (he was raised from the dead, after all). As an angry mob recapture the monster and bind him to a large wooden log, it lacks only the crossbeam to resemble a crucifix. It's even more explicit at another point when he escapes and hides in a graveyard's mausoleum that lies beneath a large crucifix sculpture complete with Jesus. The real pathos comes in the film's most famous scene when the monster receives refuge from a kind blind hermit (O.P. Heggie), whose violin music attracts the monster to the hermit's cabin. The sweet scene, which does have some tension when the blind man unwittingly lights a cigar, turns into a tutoring session as the blind man begins to teach the monster speech and to realize, as the monster puts it, "Alone bad. Friend good." The one sad note about the scene is that, as great as it is, it is impossible now to watch it without thinking of the hysterical spoof version from Young Frankenstein with the brilliant comic duet between Peter Boyle and Gene Hackman in the classic Mel Brooks satire. Also, look for a brief appearance from John Carradine.

Now the mad scientist of the first film, Henry Frankenstein, has come to see the error of his ways and is ready to resume plans to wed Elizabeth (Valerie Hobson), who is beside herself as how the events of the 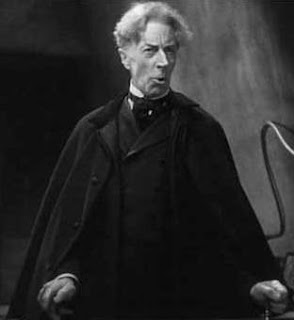 first film undermined the nuptial plans. "What a terrible wedding night," Elizabeth says with more than a little understatement when Henry is brought home and first thought dead. However, without even the use of lightning, Henry comes back around and confides to Elizabeth how wrong he'd been to meddle with matters of life and death. "Perhaps death is sacred and I've profaned it," he tells her. He only wanted to give the world the secret that God is so jealous of. In order to move the story forward, even though it's been established that neither Henry nor the monster perished as moviegoers had once thought, the story better find a new mad scientist stat. They find a great creation in one Dr. Pretorius. Pretorius, especially as portrayed by Ernest Thesiger, truly is a brilliant creation from the very first moment he appears at Henry's bedside to try to lure him back into the monster-making business. Henry knows Pretorius from university where Pretorius was a doctor of philosophy until he got "booted out." Pretorius agrees that booted out is the correct term that the university forced him to leave for "knowing too much." He also emphasizes that he's a medical doctor as well. Still, Henry stays strong during Pretorius' first two visits, refusing his entreaties to see his work, but finally he caves, setting the stage for one of the funniest bits. 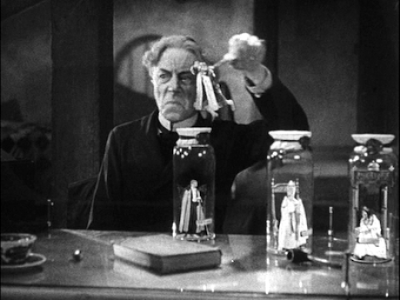 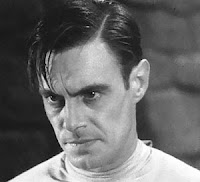 When Pretorius unveils his creations to Henry, it is a laugh riot. The film leaves out the details of how he created them beyond growing them from cultures, but who cares? He has made miniature people that he keeps in glass bottles, but not just any people. Pretorius has flair: there's a king (and a horny king at that), a queen, an archbishop and another. The king even manages to escape his glass confines to try to get at the queen. Pretorius finds great delight in his work and the prospect of "a new world of gods and monsters," the crucial line from which Bill Condon took the title of his great 1998 biographical film of James Whale. It's never explained why if Pretorius was able to produce these marvels he'd need to team with Henry for what to me would seem to be a step backward involving graverobbing and piecing together corpses to reanimate the

dead, but as Pretorius says, "Science, like love, has her little surprises." Henry finds enough intrigue, especially with the idea of a man-made race and finding his monster a mate so they can be fruitful and multiply, that he's back in business. Pretorius recruits some condemned men (one played by everyone's favorite 1930s henchman, Dwight Frye), and even they have trepidations about the plan, expressing that graverobbing is no life for murderers and perhaps they should turn themselves in to be hung. Henry still has his qualms but Pretorius stumbles upon the good fortune of finding the escaped monster and has him hold Elizabeth as leverage to keep Henry in line. The monster, it goes without saying, finds the concept of a new friend made just for him very exciting. 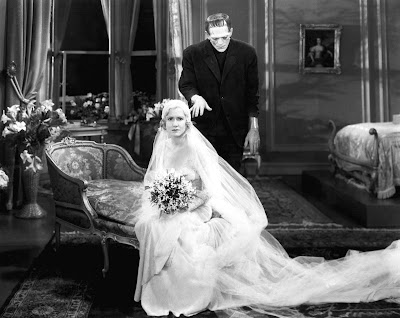 So as one would-be bride becomes a prisoner, another would-be bride lies on the slab, awaiting the storm that will bring her to life and introduce her to her new after-death mate. Of course, neither romance nor arranged 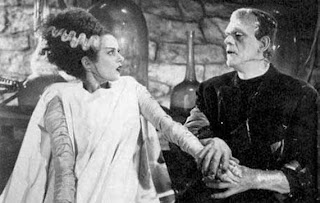 marriages usually go that smoothly and as the bride awakens, with her wacky hairdo which has no rational explanation, especially since her skull seems bald while wrapped on the operating table, Elsa Lanchester returns. Her head movements resemble that of a chicken's. In fact, I couldn't help but think of Mark McKinney doing The Chicken Lady on The Kids in the Hall as I watched Lanchester's movements. The monster is giddy, the bride less so. While her look isn't nearly as horrifying as his, he doesn't look like a handsome fellow to her and she shrieks like there's no tomorrow and the poor monster finds himself rejected once again. The monster, in a rare moment of self-realization, accepts that he doesn't belong on earth and sees the worry that Henry expresses for Elizabeth through the window. The monster admits he should be dead, but allows Henry to escape before destroying the lab and taking the bride and Pretorius with him. Of course, we know there were countless Frankenstein sequels to come, so they'd write themselves out of this ending as well, but they'd never come up with a sequel with as much flair, fright and life as Whale did in this first one.