The light goes out By Edward Copeland
I'm not going to pretend to be a regular, or even sporadic, viewer, of Guiding Light , but my mom is and my grandma was. At times in my life, I did. Summers as a child, bored afternoons as I waited to go work as a nighttime copy editor. Still, any drama that lasts a combined 72 years on radio and television deserves some notice when its time comes to an end, as the CBS soap opera will today. 72 years. That simply will never be equaled no matter how many times Law & Order refreshes its cast. Guiding Light began as a radio drama in 1937, at the beginning of FDR's second term. It began its television version in 1952 and kept the radio version 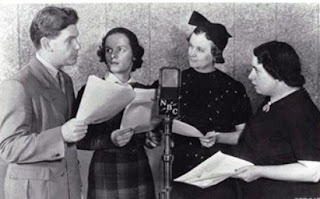 as well for the first six years. The first few years of the radio version featured the voice talents of none other than future Oscar winner and future voice of the possessed Linda Blair in The Exorcist, Mercedes McCambridge. The title came from the central character, a reverend who tried to advise and give strength to his town's citzens and he was voiced by Arthur Peterson (seen on left), who would be noticed 40 years later as The Major on Soap. Another of the radio voices belonged to Betty Lou Gerson, better known as Cruella De Vil. Guiding Light boasts an impressive lists of actors who either served time on the show as characters or appeared as guests, among them: Sandy Dennis, Christopher Walken, Barnard Hughes, Joseph Campanella, Blythe Danner, Kevin Bacon, Sherry Stringfield, Melina Kankaredes, Teresa Wright, Joan Bennett, Dick Cavett, James Coco, Dorothy Loudon, 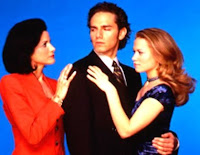 Chita Rivera, Leslie Uggams, Tammy Grimes, Cindy Adams, Joan Collins, Philip Bosco, Jan Sterling, Allison Janney, Ruth Warrick (before All My Children), Chris Sarandon, Ed Begley Sr., Jesse L. Martin, Taye Diggs, Sorrell Booke, Everett McGill (Big Ed of Twin Peaks), Giancarlo Esposito and Adolph Caesar. The B-52s even dropped by once. Inside the Actors Studio host James Lipton acted on the show from 1952-1962. James Earl Jones and Cicely Tyson played a couple and when they left were replaced by Billy Dee Williams and Ruby Dee. Both of the Sopranos' neighbors the Cusamanos, Robert LuPone and Saundra Santiago, appeared at different times, though Santiago had the far more significant role as vindictive mobster Carmen Santos who, at last word, was still lying in a coma. She was deliciously bad, though you always had to blame her for killing off the great character of Ben (Hunt Block), which may have been one of the show's final, fatal missteps. The late Larry Gates had a long run as oil patriarch H.B. Lewis after a long career that included the films In the Heat of the Night, Cat on a Hot Tin Roof, Some Came 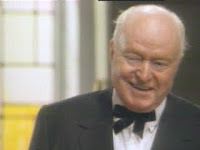 Running and the original Invasion of the Body Snatchers. Really, whether or not you ever watched any daytime drama, and if you don't soon you may not get the chance, because it's a dying breed in the expanded television universe, two paycheck households being the norm and the ratings of the survivors not justifying their costs, they are an amazing achievement. Some time they are bad, then they rebound. Some display some of the best television acting you'll see. Some also display the most awful amateurish acting you'll witness. However, when you consider they are on year-round for decades, the quality control is pretty remarkable. Some prime time shows have a hard time coming up with 22 good episodes in a season and run out of steam after a few seasons. Soap operas jump the shark, rise again, jump the shark again and repeat the whole cycle over and over again. That was the certainly the case with Guiding Light, at least with the times I watched. It 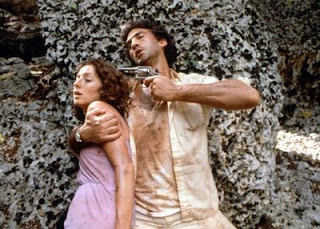 had one of the best daytime villains (and actors) ever in the late Michael Zaslow as the nefarious Roger Thorpe. As with any good villain, he was thought dead and came back but he was a bit different that he was never a cartoony bad guy as some soap villains become. As dastardly as he could be, he also was defiantly human. You could hate him, but at times you could understand and even sympathize with him without the character doing a complete 180 from where he started. He was even part of a landmark soap storyline of the 1970s when his wife Holly (Maureen Garrett) accused him of marital rape. Zaslow was far from the only great actor/character to grace the show. Justin Deas will be on until today's last episode as blue collar good guy with rough edges Buzz Cooper who originally arrived as a Vietnam vet who had faked his death in that war. Between Guiding Light, As the World Turns and the canceled Santa Barbara, Deas has been the recipient of six Daytime Emmy Awards. Of course, one of the most fabled of all the show's characters is Reva (Kim Zimmer), herself the winner of four Emmys despite being stuck in some of the show's 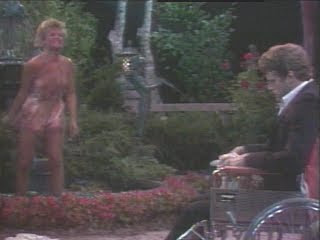 most ridiculous storylines. She was cloned. She had amnesia and became Amish after spending life in an island nation as its princess and having a secret child. After "dying," she came back as a ghost. There was a time traveling storyline, a period when she was suddenly psychic. She went through menopause and then years later became pregnant. It's a credit to Zimmer that she managed to keep Reva having any credibility at all. One of the best performances I ever witnessed on the show (which earned an Emmy) was Cynthia Watros as Annie, a nurse who became a woman scorned when her husband's former wife (Reva) came back from the dead and she slowly transformed into a double-barrelled psycho. It wasn't an abrupt change and included addiction to pills and drink that precipitated her fall but Watros was so great I often wonder why we don't see her in other venues. The character was so great, Annie even went so far as to kidnap a policewoman from another town and have plastic surgery to look like her to insinuate herself back into Springfield anonymously. Unfortunately, the face change meant no Watros. While soaps are often thought of mostly for the romance and trial and tribulations, not enough is made of their humor and Guiding Light was often very good at it, especially during the years Nola Reardon (Lisa Brown) was around with her crazy fantasies. So, even if you've never watched a soap and never plan to, raise a toast today to the passing of Guiding Light. The Bauers, the Spauldings, the Shaynes, the Coopers, the Lewises and the Reardons (are any of them left?) will live on in memories and an unaired Springfield after today and 72 years is one helluva broadcasting achievement. Replacing the show? A new version of Let's Make a Deal hosted by Wayne Brady. Now, that's depressing.

Comments:
Wow, Edward, this yet by far the best
blog and Goodbye to "the Light" I have read and seen. Not because I happen to mentioned in it, but it really caps why it was the longest lasting program so far. So many fine
actors just happen to wonder through. Not a coincidence. Thank you for this!!!

No other television soap villain could ever compare with Roger Thorpe. He was the ne plus ultra of bad guys.

I agree that the overall achievement of soaps is considerable. No repeats, ever. A storyline that unfolds continuously, like real life.

I wanted to watch the final episode, but I wasn't near a TV. Hopefully it's online somewhere.

Ahhh, someone else who remembers Lisa Brown as Nola Reardon! My grandmother started with the radio version, but I only watched GL a few years. Fortunately for me, it was during the time of Nola Reardon and her antics. What a fun character to watch!