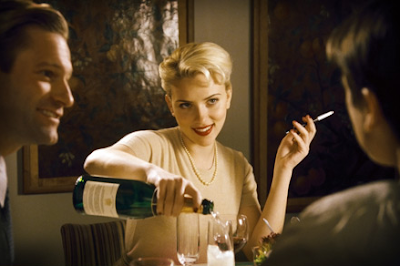 By Edward Copeland
My experiences with Brian De Palma, though I've certainly enjoyed some of his films, have usually fallen along the same line: He comes up with a couple of good sequences and then seems to blow off the rest of the movie. The Black Dahlia is the first time that I can recall that I've watched a De Palma movie where it seems as if after getting the look of the film set, he didn't bother with anything else that would be necessary for making an interesting film.

Certainly, the technical aspects are exceptional. Vilmos Zsigmond definitely deserved his Oscar nomination for cinematography, Dante Ferretti has assembled a great production design and Jenny Beavan's costumes are right on the mark. The same cannot be said for Mark Isham's suffocating musical score, which never seems to shut up and drowns out much of the dialogue which, admittedly, is a blessing at times.

Unfortunately, The Black Dahlia may well be one of the worst-cast films I've seen in some time. In telling the story of an infamous 1940s murder of an aspiring starlet in Los Angeles and based on the novel by James Ellroy (L.A. Confidential), it's obvious that De Palma and screenwriter Josh Friedman want to evoke the memories of classic noirs of Hollywood's past, but the hokey dialogue, poorly delivered by the likes of Josh Hartnett and Scarlett Johansson, don't make you yearn for Hollywood's glorious past but rather just reminds me you how superior more recent efforts such as L.A. Confidential and last year's Hollywoodland are.

Making matters worse is that the story is a muddle of nearly unparalleled proportions, involvings cops who sideline as prizefighters, an abusive ex-boyfriend set to be released from jail, a bank heist gone awry, police corruption and, of course, the central mystery and none of the stories make a lick of sense or hold your interest.

The actors who seem to be in the right place are few and far between. Aaron Eckhart does fine as one of the two central cops as does Mike Starr in a small role as a police superior. However, the rest of the cast flounders, partly by their own performances and partly by the dumb dialogue. Hartnett turns in a performance blander than usual. I know he can turn in an interesting performance: He was the best thing in Tim Blake Nelson's O, playing the modern equivalent of Iago. Here though, he's an emotionless blank slate and his voiceover work is even worse.

Johansson tries, but her mix of sophistication and naivete falls flat and she looks downright silly when she's got a cigarette holder in her hand. However, one of the film's two worst performances belongs to Hilary Swank in a mannered turn as a young socialite with a resemblance to the dead starlet and some sort of connection to the various crimes that I still can't figure out even after seeing the movie.

The other is what amounts to a cameo by the by the great Irish actress Fiona Shaw, who seems to have been teleported from the set of a 1960s Robert Aldrich movie. To say her climactic scene is over the top is to do a disservice to over-the-top performances, though I have to wonder if she just played it that way in the hopes she could get her involvement in the movie over more quickly.

Comments:
I thought DePalma and Elroy were a match made in heaven, but the reviews of this have been awful. And for that reason, I haven't been rushing to see it.

But you're right about DePalma, he loves his scenes. The Amy Irving escape in The Fury, the stairs in The Untouchables, the editing in Blow Out. Can you imagine if he dedicated all that time and effort to the whole movie? That would be something.

I agree that The Black Dahlia was a muddled, turgid mess, but I have to say I did enjoy the performances from Hilary Swank and Fiona Shaw. Their bits of high camp were the only bits of life in the whole movie (I'm not a fan of De Palma and I find his showy sequences far too laboured, stretched out and quite frankly obvious to be exciting).

Although I will admit that I did somewhat enjoy Black Dahlia (I found it to be, like all of DePalma's work, visually very strking) I can agree that it was rather disappointing, especially in light of L.A. Confidential, a far superior treatment of an Ellroy story. I recently re-watched Kasdan's Body Heat and was struck by it that I wrote a lengthy analysis of it (in which I briefly mention Black Dahlia). Now, there was a neo-noir film that did right all of the things that DePalma does wrong.

i keep on saying i'm going to watch this movie and then i keep on reading thoughts like this and I ask "why would I want to do that to myself."

Black Dahlia was on my ten worst list, and I give DePalma more latitude than I should on occasion. I can't see how anyone thought this was a good movie.

Swank is terrible (and I'm not one of those snobby crix who dislike her because it's fashionable--I loved Million Dollar Baby dammit), but she's not as miscast as Scarlett Johanssen. Why do people keep casting her as the bad girl? I wonder if Woody and DePalma cast her because they wanted to fuck her, not because she fit the part. I'd make a better femme fatale than Johanssen, and I look like hell in a dress and not even Stevie Wonder would mistake me for a woman. Imagine me, blonde wig and all, smoking a cigarette and saying "you're not too bright are you? I like that in a man" or "Why don't you put your head on my husband's shoulder?" I'd still be more convincing than Scarlett Johanssen. (You can thank me later for the horrid imagery...)

He comes up with a couple of good sequences and then seems to blow off the rest of the movie.

Snake Eyes is the movie that proves that theory.

Very disappointing film and screenplay considering the strength of the book. It reminded me of every other de Palma film I seen - down to the classic De Palma cliche of the frenzied love making on the kitchen table (seen that in at least three other films by him). Black Dahlia was so "De Palma" it almost lapsed into self parody.

Black Dahlia deserves to be remade with a better screen play, better cast, and a better director.