What you can do if you're a total psychotic 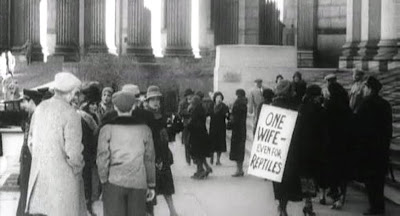 By Edward Copeland
Writing about The Purple Rose of Cairo recently put me in a Woody Allen state of mind, remembering back fondly to when he was in his most creatively fertile period. As a result (and with a timely sale at Deep Discount DVD), I revisited Zelig and the film is even better and more impressive than I remembered. This mockumentary is so solid that it puts all of Christopher Guest's efforts to shame and the insertion of Zelig in scenes with famous people foreshadow Forrest Gump, only it's used here to even greater effect. (I know — Orson Welles stuck Charles Foster Kane into scenes with Hitler more than 40 years prior to Zelig, but Allen really took that idea and ran with it).

It's really quite incredible to see some of the clips he's inserted Zelig into, such as the Hitler sequence where it appears that the Nazi truly is interacting with Woody Allen's character. When I first saw Zelig years ago, I thought it was fun, but mainly a one-note gimmick, but the years have only made Allen's achievement seem more impressive.

For quite a bit, Zelig acts as a straight documentary, with real-life authority figures such as Susan Sontag and Saul Bellow commenting on the phenomenon of Leonard Zelig as if he really existed. Zelig was a Depression-era man with a highly unusual condition — the ability to take on the characteristics of whomever he was around at the time.

Mia Farrow plays the only other fictional character of note, Dr. Eudora Fletcher, the psychiatrist determined to get to the bottom of Zelig's condition. It only dawns slowly on the viewer that a comedy is at play, since most of the lines are spoken through the brilliantly deadpan delivery of the narrator (Patrick Horgan). When Allen does finally speak, giving spins on some of his standard material, the spell is broken slightly but the conceit is so well constructed, especially thanks to Gordon Willis' magnificent cinematography, the film gets away with it.

The comedy is frequent, but it's so dry and droll that a lot of it may be lost on a casual viewer. There aren't really acting performances to assess, because Zelig might as well truly be a documentary. If you've never seen the film, I won't spoil the many great gags, but I do have to say that Zelig has only grown greater with age and makes the creative rut that Allen has been stuck in for the past decade or so seem even more depressing.