If you lose the war, don't blame me

BLOGGER'S NOTE: This post is part of the 1927 Blog-a-Thon being coordinated at Goatdog's Blog. 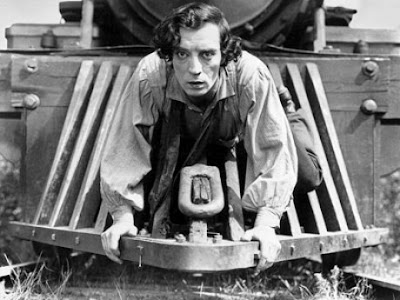 By Edward Copeland
1927 offered quite a few of silent cinema's undisputed classics but when I thought about what to write about, I had to go with Buster Keaton and his largely unheralded co-director Clyde Bruckman's The General.

I'm sure it will be one of the more popular subjects this weekend but hell, when else was I gonna come up with a good excuse for writing about it? Rewatching the movie ahead of this, I was struck once again by what a masterwork it is.

Keaton and Charlie Chaplin seem permanently linked together as silent film's two great clowns but, though The General provides plenty of laughs, it should really be classified more as an adventure than a comedy because it produces just as much suspense as silliness.

It's also striking for a degree of realism in its Civil War setting that you wouldn't expect your run-of-the-mill comedy to take the effort to realize. What's even more fascinating is that even though Keaton's character of Johnny Gray is from the South and longs to help the Confederacy against the Union, neither side is portrayed in a particularly villainous light.

Of course, much of the humor of the film stems from Johnny Gray's two loves: Annabelle Lee (Marion Mack) and his train engine The General. When the Confederate Army refuses to enlist Johnny, saying he's more valuable as an engineer, Annabelle's father misinterprets it as Johnny being a coward and tells Annabelle so, prompting her to tell Johnny she can't love him until he's wearing a soldier's uniform and disbelieving him when he tells her the real reason.

Honestly, it makes you wonder why he'd even care about someone who demands such a silly thing. However, when the Yankees steal his beloved train, Johnny rises to the occasion to retrieve it, unaware at first that they've taken Annabelle as well. The rest of the film is one long, funny and riveting chase.

When I think about it, many of my favorite comedies of all time really contain as much tension as gags such as Dr. Strangelove, His Girl Friday or After Hours.

I've always hated the great Keaton vs. Chaplin debate, as if it's impossible to love them both, which I do. It's also like comparing apples and oranges. The General vs. City Lights? Sherlock Jr. vs. Modern Times? Why be forced to pick? In a way, it's like Fred Astaire vs. Gene Kelly, with Chaplin taking the more stylish Astaire role while Keaton displays Kelly-like athleticism. I don't want to pick between those two either.

Comments:
Loved loved loved that film. As for "Someone should be writing about the transition to talkies making the industry stumble? The very topic I chose :D

This is the first film that came to mind when I saw "1927 blogathan." I know what you mean about avoiding the Chaplin/Keaton debate, but I make an exception when it comes specifically to women in their movies (being a woman myself). I think it was either James Agee or Todd Browning who observed that while Chaplin views women through the gauzy, rose-tinted filter of a closet misogynist, Keaton's heroines are fallible and funny. The scene where he throttles Annabelle and then kisses her tops my list of most romantic movie scenes ever.

What a great movie The General is! I liked how you mentioned the historical accuracy of its atmosphere. The General was made within living memory of the Civil War.

"The General" was a movie way ahead of its time. Contemporary reviewers and audiences simply didn't get it, since it lacked the mawkish sentimentality and ham-fisted overacting of other silent films.

Johnny is, of all of Keaton's characters, probably most true to his real self -- an astonishingly adept man, in love with his work, who goes through life vastly underrated due to his native humility and modesty.

While I can watch Chaplain movies as a quaint glimpse into the cinematic past, I watch Keaton films -- especially "The General" and "Steamboat Bill Jr." -- because the characters and story draw me in. They're truly timeless.