The heart is a very resilient little muscle 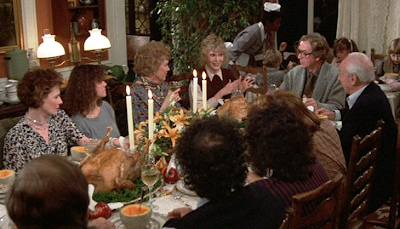 It seems to me I've heard that song before
It's from an old familiar score
I know it well, that melody

I know each word, because I've heard that song before
The lyrics said: "for evermore"
For evermore's a memory

"I've Heard That Song Before"
by Jule Styne and Sammy Cahn
By Edward Copeland
More than 21 years after I first saw Hannah and Her Sisters, the song is as lovely as ever and provides another sparkling example of Woody Allen when he was in his filmmaking prime. 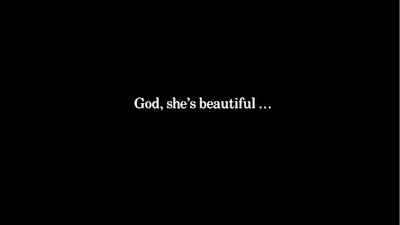 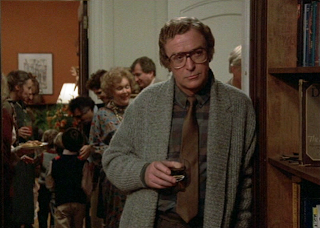 That first title card plunges us into Hannah and Her Sisters as we learn that Elliot (Oscar winner Michael Caine) has developed a profound attraction to Lee (Barbara Hershey), wife of Lee's sister Hannah (Mia Farrow) and thus begins a myriad of interlocking tales surrounding the three sisters, their exes, lovers and friends. Woody Allen's 1986 film won him his second Oscar for original screenplay and revisiting it, I was struck how it is much less jokey than most of his films that aren't flat-out dramas. There are plenty of laughs to be sure, but they flow more from characters and situations than from punchlines. The story revolves around the three sisters: Hannah, a mostly retired actress turned housewife; Lee, a recovering alcoholic whose employment (if any) is vague who lives with a grumpy older artist named Frederick (Max von Sydow); and Holly (Dianne Wiest, in her Oscar-winning performance), an aspiring actress and a mess with a penchant for cocaine and debts. 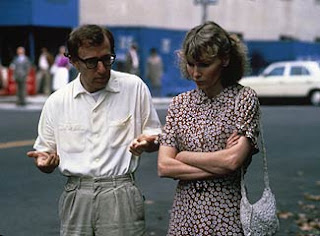 The film also tells the story of Mickey Sachs (Woody Allen), Hannah's ex-husband who produces a Saturday Night Live-type television show and almost seems as if he could be what Alvy Singer of Annie Hall turned into years later. Tony Roberts even cameos as Mickey's former writing partner who has found success in television in L.A., just as Roberts' character did in Annie Hall. What's amazing is how fleetly the film moves when there really isn't a strong throughline to lead the action. With the use of the title cards, it's almost as if each section is a short in itself (obviously patterned on Ingmar Bergman's Scenes From a Marriage), but without leaving mixed results from sequence to sequence. The strand that holds it all together is the unpredictability of love, with a side order of fears about mortality.

One thing that never occurred to me until I watched it again is the film's unusual use of voiceovers. In most films with voiceover narration, there usually is a single voice, though there are exceptions (Both Ray Liotta 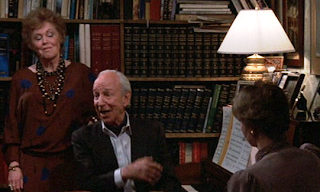 and Lorraine Bracco narrated sections of Goodfellas), but Hannah and Her Sisters offers voiceovers by five different characters: the three sisters, Elliot and Mickey. The movie may also be the best directing Allen has ever done, not only in terms of pacing and unusual shots but especially in the film's most bravura sequence where the camera circles the three sisters at lunch while each has their own agenda and crisis, some spoken, some not. It may also provide his best use of music, with a soundtrack filled with Bach and Puccini and many standards performed as recordings by the likes of Harry James or in the movie itself by Bobby Short. There's also Lloyd Nolan and Maureen O'Sullivan as the sisters' bickering parents, giving a heartfelt rendition of "Bewitched, Bothered and Bewildered" by Rodgers and Hart. 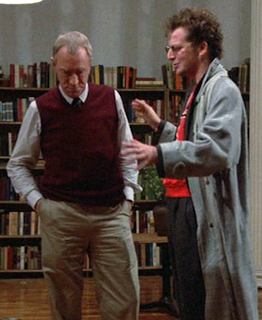 The performances are spectacular across the board. I always loved Wiest's work and was especially fond of von Sydow as Frederick, labeling Elliot as a "glorified accountant," telling Daniel Stern that he doesn't sell his art by the yard or to match a sofa or even just channel surfing, commenting on a documentary about the Holocaust that the question isn't "How did this happen?" but, given the way the world is, "Why doesn't it happen more often?" I still think it might be Allen's most well-rounded performance. At the time, I thought that the Oscar for Caine was overly generous, but looking at his performance again now, he is quite good, though I still would have gone with Dennis Hopper. Indeed, questions and answers seem to be at the heart of Hannah and Her Sisters. When Elliot finally confesses his feelings to Lee and realizes that she returns some of them his gleeful response is "I have my answer. I'm walking on air." When Mickey has a health scare, it prompts him to pursue a more spiritual journey, including pursuing possible interest in Catholicism and other religions, deciding that the certainty of death and the uncertainty of faith ruins everything else. His parents, who raised him as a Jew, are less than thrilled and he asks them why there were Nazis to which his father replies, "How the hell should I know why there were Nazis? I don't know how the can opener works." Mickey's search for answers leads him even to contemplate suicide, but for the second Allen film in a row (following The Purple Rose of Cairo), healing is found in a movie theater. He decides that "maybe" is a slim reed to hang your whole existence on, but it's the best we have. 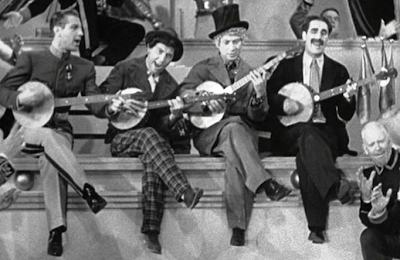 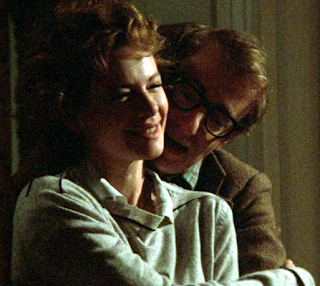 The film also raises more subtle questions that make you wonder what the truth is of the story itself. When Holly laters pursues a writing career and reads her script to Mickey, you are left wondering if the story's denouement is wishful thinking as to the fate of an architect (Sam Waterston) she once pursued who ended up with her friend (Carrie Fisher) or it it actually happened. It's funny either way. Also, when Elliot is shown plying Lee with alcohol during one of their trysts, you have to wonder if he's aware of her alcoholism and if she's fallen off the wagon, but the movie never makes a point of addressing it. Finally, he leaves the biggest question for the end and really, it's really a sort of Rorschach test for the viewer as to whether they are more of a cynic or an optimist. In a flashback earlier in the movie, we learn that when Mickey and Hannah were married, they learned that Mickey was sterile and had to use artificial insemination to get Hannah pregnant. Late in the film, Mickey and Holly become an item and get married and in the final scene, Holly reveals that she's pregnant. Is it a miracle or is she cheating? The film doesn't say and that ending really is a perfect capper for the entire movie. 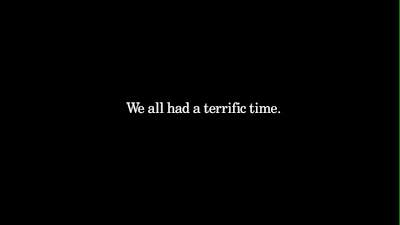 Comments:
Best part of that movie? The e.e. cummings sequence.

This is one of my favorite Woody Allen films. Michael Caine and Max Von Sydow are my favorite parts. I love the scene where Lee and Frederick embrace and bump into the record player playing Bach. It knocks the slow piece of music that's playing over to a much faster piece, perfectly complimenting their moment of agitation. BTW, I don't think Holly was cheating, I guess that makes me an optimist.

Scratch that. The above should have read that Elliot and Lee embrace, and Frederick's entrance startles them into bumping the phonograph.