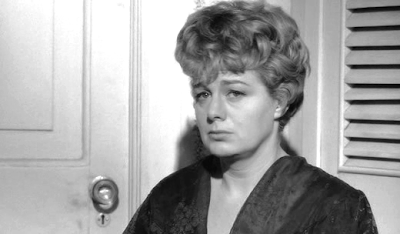 Two-time Academy Award winner Shelley Winters died Saturday at the age of 85. Through a long distinguished career, she gave many memorable performances (and some not-so-memorable ones) in movies ranging from good to awful. On Broadway, she replaced Celeste Holm and become the second Ado Annie in the original production of Oklahoma! Here are some quick thoughts on the movies and TV performances I've seen of Winters.

1951: A Place in the Sun: Though the first films in her IMDb credits that I've seen are Howard Hawks' classic Red River, I don't recall her uncredited appearance as Dance Hall Girl in Wagon Train, and I don't really remember her work as Pat Kroll in A Double Life either, so this is the film I first recall.

The first thing that springs to mind about A Place in the Sun is the joke that Harvey Korman and Tim Conway made when talking about the film in one of those awful AFI Top 100 TV specials. "Would you kill your wife for Elizabeth Taylor?" Conway asked Korman who replied, "I'd kill my wife for Shelley Winters."

1954: Executive Suite: Part of the large cast of this drama of corporate intrigue following the death of a company president, Winters' role as an executive's mistress was, like many of the performances in the film, much better than the movie deserved.

1955: The Night of the Hunter: Charles Laughton's only film as a director is a classic in its own right as is Winters' work in a role that seems to be a recurring theme in her career — paying a price for marrying the wrong man, this time Robert Mitchum's evil preacher.

1955: The Big Knife: There have been better attempts at making cynical films about Hollywood, but Winters does shine here as a falling starlet with blackmail on her mind.

1959: The Diary of Anne Frank: Winter's second Oscar nomination and her first win, as supporting actress, for playing Mrs. Van Daan. Her performance is slightly hammy, but she's good.

1962: Lolita: Shelley picks the wrong husband again in Stanley Kubrick's adaptation of Vladimir Nabokov's classic novel. She is truly great here and it's a crime that she didn't get nominated for this performance.

1965: A Patch of Blue: Winters won her 2nd Oscar on her third nomination for this dated, fairly lame movie where she played a harridan of a mother who abuses her blind daughter and goes crazy when she starts hanging out with a black man (Sidney Poitier).

1966: Alfie: Vivien Merchant got the Oscar nomination, but Shelley deserved consideration too as one of Michael Caine's many paramours.

1966: Batman: One of the many great actors to take a shot at playing villains on what may be the greatest television comedy of all time (OK — I exaggerate — but it is funny as hell). She played Ma Parker, a Depression-era crook with a large brood of half-wit kids who somehow was running amok in 1960s Gotham City. She was great fun.

1972: The Poseidon Adventure: Winters got her last Oscar nomination for the brave Mrs. Rosen here. I have to admit — of all the disaster movies, I'm a sucker for this one, which I love, and Winters is one of the many reasons why. Damn you Hollywood for trying to redo what was great to begin with not once — but twice this year, once on TV and in the upcoming unnecessary movie remake.

1977: Pete's Dragon: My memory is fuzzy, but this may well have been my first exposure to Winters as the leader of a bumbling gang of crooks. I haven't seen the movie in decades, so who knows how it would hold up but I remember Winters fondly.

1981: S.O.B.: Winters was one of the many greats in this underrated Hollywood satire by Blake Edwards. She played a famous agent embroiled in the madness surrounding a director's mental breakdown over his latest film. Trivia note: S.O.B. doesn't stand for what you think it does, it stands for Standard Operational Bullshit.

1991-96: Roseanne: Winters appeared 11 times on this classic sitcom as Nana Mary, Roseanne's grandmother. She fit in perfectly with an already strong ensemble and provided many memorable moments, including bringing a surprise and nearly dead husband to a family gathering and being decorated by Roseanne and Jackie after she's fallen asleep in a chair.

1996: Portrait of a Lady: One of her last feature film roles of note, Winters showed she still had her stuff in Jane Campion's so-so adaptation of Henry James' novel.

There were many other films of note that I haven't been able to see, but I've seen enough to recognize what Winters was worth to movie fans everywhere.

Rest in peace, Shirley Schrift — and Shelley Winters, too.

Comments:
Whether playing her characters to the hilt in roaring full-on camp mode, or toning it down for a subtler effect, Shelley Winters was one of those actresses who always made an impression, and was more often than not a joy to watch. She knew how to navigate the extremes of her performance style, and could be outlandinshly repulsive at one moment and unexpectedly moving in the next. David Thomson best sums up her appeal: "Blowzy, effusive, brash and maternal, either voluptuous or drab, Shelley Winters is at her best when driven to wonder, 'How did a girl like me get into a high-class movie like this?'"

If her indelible turn as 'The Haze Woman' in Kubrick's Lolita still stands as her crowning achievement, there are many other wonderful performances that bear mentioning. Here are a few standouts in addition to those you've mentioned:

-An arresting debut in 1947's A Double Life opposite Best Actor winner Ronald Colman, making more of an impression than the film's nominal leading lady.

-An ill-used sad-eyed frontier harlot in Anthony Mann's 1950 western Winchester `73 opposite James Stewart, perhaps the best-performed exmaple of the protypical Winters character from the early part of her career.

-A rambunctious, rip-snorting turn as Kate, the crass, lewd, riotously uncouth mistress of Telly Savalas' villanous bandit in Sydney Pollack's 1968 comic western The Scalphunters. With her hair in blong ringlets, her ample frame stuffed into a succession of hilariously vulgar corsets with matching garters, Winters holds court from the back of a covered wagon shuffling tarot cards, chomping on a stogie, and bemoaning her lot in life, stealing the picture from the formidable talents of Burt Lancaster and Ossie Davis in the process. Endearingly guillible but surprisingly pragmatic, her last line is a killer. It's a sad reflection on the Academy's capriousness that her shrill winning turn in 1965's A Patch of Blue should be bracketed by two much worthier, undeservedly neglected performances - the other being Lolita.

"As Larry's Mom, Shelley Winters is a hysteric on the loose, barging into his apartment in the middle of a party, embarrassing him so much he wants to crawl under the furniture. Her unused brains have turned her into a howling freak, but you can recognize in her the source of her son's talent and wit. And, even seeing her through her son's agonized-with-shame eyes, you don't get too much of her - or rather, you can't get enough of Shelley Winters's performance. With her twinkling goo-goo eyes and flirty grin, Shelley Winters is a mother hippo charging - not at her son's enemies but at him. Fat, morosse, irrepresible, she's a force that would strike fear to anyone's heart, yet in some abonimable way she's likable. She's Mrs. Portnoy seen without hatred."

Winters worked right up through the 90s, and doubtless would have continued longer had health the availability of worthy roles permitted. Her turn in Heavy opposite Liv Tyler and Pruitt Taylor Vince was the best-reviewed performance from the last years of career, but I have yet to see it. Doubtless there are other Winters treasures out there waiting to be rediscovered.

Thanks for the reminder on A Double Life, Josh. It's been so long since I've seen it, I forgot she was the waitress he strangles.

I'm glad you noted her good work in Alfie, she was in excellent condition.

I really loved Lolita, Alfie, And A Place in the Sun. Although, you don't appreciate the joke I just read it and I thought it was hilarious. What's wrong with that?