From the Vault: Ghost World 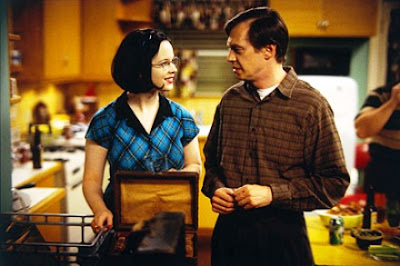 By Edward Copeland
Movies can succeed by taking you to places you've never known or showing you worlds you know too well. The latter is the land where Ghost World resides.

Ghost World spins the tale of Enid (Thora Birch), a high school graduate (assuming she makes up a failed art class in summer school) who pursues her angst enthusiastically, dwelling almost exclusively in a land of deadpan irony with her best friend Rebecca (Scarlett Johansson).

Enid cloaks herself in wardrobes and hairstyles designed to provoke, daring the world to mock her while she sneers at everything and everyone she encounters. Birch, so good as a different type of alienated teen in American Beauty, nails Enid, capturing her wit and her pathos. Birch seems likely to escape the child actor's curse as she moves into adult roles.

Faithfully adapted by Daniel Clowes and director Terry Zwigoff from Clowes' great comic book, how well Ghost World works depends almost entirely on the degree with which you recognize its characters.

The movie's biggest departure from the comic book is the character of Seymour, a middle-age bachelor and audiophile who begins an unlikely friendship with Enid. Steve Buscemi plays Seymour and it's his best role in quite some time. He slips so easily into Seymour's skin, you'd think a tailor had sewn the character to him.

Zwigoff makes his fiction directing debut with Ghost World, his first feature since making 1995's best film, the documentary Crumb. Zwigoff's pacing lags occasionally, but it seems right for a film about a character as directionless as Enid.

Still, Ghost World entertains consistently, using its sarcasm to hide its more downbeat turns. Again, if this universe seems familiar, you have to know those moments are inevitable.

Ghost World won't please everyone and will leave some viewers cold. However, for those who recognize friends and acquaintances in its vivid character sketches, the movie provides a nostalgic tonic of warmth.