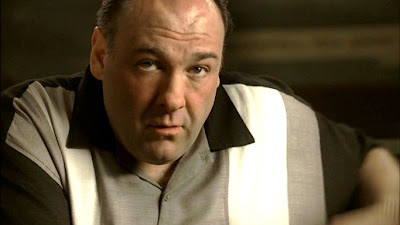 Sometimes, when the greatest of our artists mark the upper reaches of their golden years or they've announced an ominous health prognosis, I plan in advance what type of appreciation to write. However, when an unexpected death such as James Gandolfini's occurs at the age of 51, the task proves harder — I expected a lot more to come from this gifted actor, not this sudden, cruel punctuation mark of finality stamped on a career that promised us so much more. 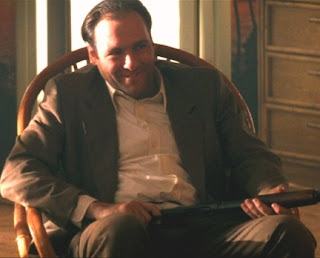 Before Gandolfini created one of the greatest characters in the history of prime time television when Tony Soprano first entered our lives on Jan. 10, 1999, I'd already noticed his talent in a several film roles prior to that, such as the gangster Virgil terrorizing Patricia Arquette in Tony Scott's True Romance. As Vinnie, the ex-boyfriend and father of the title character's unborn baby in Angie opposite Geena Davis, his casting against type made for the best part of the film. He proved adept as part of the comic ensemble as Bear, would-be tough guy working for Delroy Lindo's Bo Catlett in Get Shorty. He worked with John Travolta in an ensemble again, this time of a more serious nature, as one of the homeowners in a small town feeling the effects of a corporation's pollution in A Civil Action. In the same time period, he also appeared in two Broadway shows: a revival of A Streetcar Named Desire starring Alec Baldwin and Jessica Lange, and an original stage version of On the Waterfront where he played Charley Malloy, the Rod Steiger role in the 1954 film.

Then came The Sopranos. David Chase's creation and HBO's support changed the face of television and led us to where we are today, where even big name filmmakers admit that the quality field has flipped and you find more risk-taking and more things worth watching on the tube than you do on the big screen. Gandolfini's Tony Soprano, paired with Edie Falco's Carmela Soprano, helped lead the way, a couple leading TV into the 21st century much as Carroll O'Connor and Jean Stapleton's Archie and Edith Bunker did the same in the 1970s, though the Bunkers' effect on the medium didn't stick and wasn't as pervasive with such a small number of outlets available on which potential shows could air. The entire ensemble of The Sopranos deserves praise, but this day, sadly, belongs to Tony. Gandolfini, throughout the seven years that series ran, never failed to surprise us by finding new layers and shadings to his psychologically troubled mobster. He also played him to pitch perfection, balancing his frightening, despicable sides with his charming aspects. His coming timing came off as peerless as his dramatic resonance.

Some of the films Gandolfini made during his time on the show weren't always the best, but he seldom failed to deliver whether it was his military prison warden in The Last Castle, his philandering husband in the Coens' The Man Who Wasn't There or, most especially, his gay hit man in The Mexican. Perhaps his finest screen work came in In the Loop, the satire about an attempt by D.C. insiders to stop hawks from starting a war. He also did a fine turn in the HBO movie Cinema Verite about the making of the landmark TV documentary on the Loud family in the 1970s that could be called the first reality show. His voice also proved perfect in Spike Jonze's film of Where the Wild Things Are. Among recent films, he and David Chase reunited in Chase's feature directing debut Not Fade Away, and he appeared in Zero Dark Thirty.

I wish I could have seen Gandolfini's Tony-nominated performance in Yasmina Reza's play God of Carnage. Gandolfini also didn't limit himself to acting, serving as producer and interviewer for two great HBO documentaries related to war: Alive Day Memories and Wartorn: 1861-2010.

Several works lay in various stages of production, so I expect we have some more James Gandolfini performances to anticipate, but not remotely as many as we should. RIP Mr. Gandolfini.