Prison of My Dreams 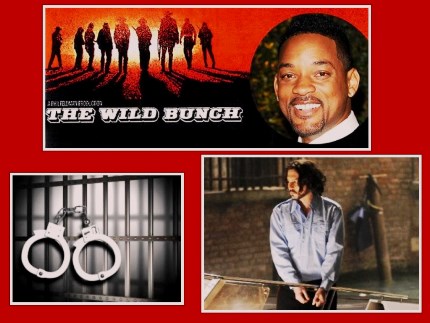 By Edward Copeland
As I snap the cuffs on Will Smith's wrists, I try to look stern and sympathetic simultaneously. "I take no pleasure in having to do this, Mr. Smith, but it's for your own good as well as the good of the public. Hopefully, your stay will be a short one." I'm taking Smith to serve his sentence in the Copeland Penitentiary for Bad Film Ideas. The actor received a summary conviction with the recent announcement of his interest of remaking Sam Peckinpah's classic Western The Wild Bunch. We had no choice. Trying to do a new version of such a revered film would be bad enough, but when you read the details that explain it would be a modern version involving the DEA and drug cartels, it sounds as if it's only stealing the title. We couldn't risk this debacle-in-development from getting to pre-production. Smith needed to be jailed until he regained his senses.

Now, if Smith breaks quickly, his sentence should be short since this idea didn't originate with him. Warner Bros. has toyed with the idea of a remake for more than a decade with various names such as the late director Tony Scott and stars such as Tom Cruise mentioned. If it were possible to put an entire studio into permanent solitary confinement, I would do it. Johnny Depp, pictured above being taken the prison to serve his time, had a longer time behind bars when he announced his intention to make a new version of The Thin Man and to take on William Powell's trademark role of Nick Charles. Thankfully, that talk disappeared once we locked up Depp for awhile and he hasn't mentioned it since. It's great that Depp loves The Thin Man — but the original remains and people should watch it. (If only the prison existed before Gus Van Sant got his cuckoo idea of doing a shot-by-shot remake of Hitchcock's Psycho in color.)

Look at the case of something that happened before the Copeland Penitentiary opened when Russell Brand remade Arthur with Brand in the Dudley Moore role and Helen Mirren taking over for John Gielgud. It sounded like a bad idea on paper, looked more horrendous when commercials and trailers appeared and received mostly bad reviews. (I did enjoy that the original in 1981 grossed more than the remake's budget which flopped badly.) What disturbed me was that the original Arthur never received a DVD release in the proper ratio and when the remake came out, they released a Blu-ray that forced you to get it with its awful sequel Arthur 2: On the Rocks.

Therein lies the dangers of remakes of great films. With technology constantly changing and money always an issue, at some point they'll start leaving us with the fresher versions, assuming that younger audiences won't know or care to see the classics. I'd try to talk them into how much money they'd save if they just re-released older films to theaters without having to spend all that money on new movies, but they won't go for it. Besides, making movies cost WAY too much to make and see today and the best stuff gets made on television anyway.