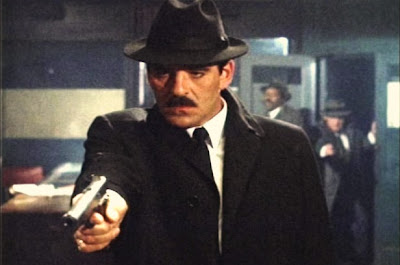 Dennis Farina tended to be typecast as a cop or a crook — and having served 18 years on Chicago's police force before turning to acting had a lot to do with that, but like so many who come to performing from other lines of work, you'd hardly notice the difference. By the premature end of his 31-year acting career, just seeing his name brought a smile to my face because I knew that he'd provide some good moments in the movie or TV show I was about to watch, even if the production itself didn't turn out to be that great. He garnered two acting nominations in his film career, both for Get Shorty. The American Comedy Awards nominated him as Funniest Supporting Actor in Motion Picture and he joined the other members of the ensemble up for the 1995 Screen Actors Guild Cast Award, including James Gandolfini. 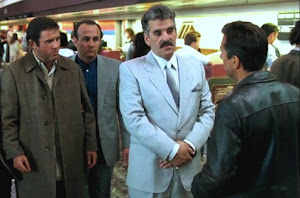 Farina made his film debut in 1981 in Michael Mann's often overlooked gem Thief. He did many guest shots and small roles in movies until he teamed with Mann again as the original screen incarnation of the FBI's Jack Crawford in Manhunter, based on Thomas Harris' novel Red Dragon, which introduced the world to Hannibal Lecter. That same year, Mann gave Farina the short-lived starring role in the 43-episode run of the period TV series Crime Story as Lt. Mike Torello. Atmospheric, vibrant and wonderfully scored — Crime Story couldn't last back then, but imagine if it had premiered a decade or so later on cable. The year Crime Story ended its run, Farina played memorable comic bad guy Jimmy Serrano in the great buddy movie Midnight Run, which just marked its 25th anniversary. Other comic bad guys would follow such as Ray Barboni in the film adaptation of Elmore Leonard's Get Shorty and the hit man Henry De Salvo in the underrated Big Trouble, based on the novel by Dave Barry.

On the good guy side of things he played Marshal Sisco, father of Jennifer Lopez's Karen Sisco in Steven Soderbergh's adaptation of Leonard's Out of Sight. He turned up briefly as one of the recognizable faces fighting World War II, in this case as Lt. Col. Anderson, in Steven Spielberg's Saving Private Ryan. He also 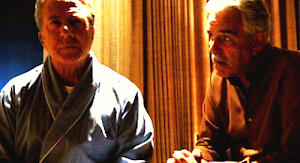 put in two seasons as Detective Joe Fontana on Law & Order following Jerry Orbach's departure. His other television work includes the short-lived, quirky detective series Buddy Faro created by Mark Frost, which I enjoyed but ended quickly. Farina also put in a nice turn as an annoying fitness center owner in HBO's adaptation of Richard Russo's novel Empire Falls. Finally, in another case of a series that ended prematurely (and unnecessarily) he landed the great role of Gus Demetriou, right-hand man and aging strong arm for horse racing-obsessed prison parolee Chester "Ace" Bernstein (Dustin Hoffman) in HBO's Luck, an ill-conceived partnership between Mann and David Milch whose cancellation got blamed on the unfortunate deaths of three racing horses in the same sort of incidents that happen at real race tracks across the U.S. daily. It's a shame, because the nine episodes of Luck that aired were excellent. HBO should have had the guts to buy either Mann or Milch out and let the series proceed. (My vote would have been to keep Milch).

Comments:
The man will be greatly missed by a number of us. What a presence he had onscreen (film or TV). May he rest in peace.

Mr. Farina will definitely be missed. Rest In Peace Sir.

Edward, good to see you posting again! Hope your health is better and keep posting!