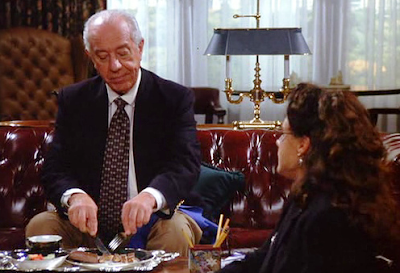 Why is this man eating a Snickers bar with a knife and fork? You'll have to ask Tom Gammill & Max Pross who wrote the 1994 episode of Seinfeld "The Pledge Drive" that had Elaine's mercurial boss Mr Pitt do such a thing. Mr. Pitt was just one of a multitude of TV and movie roles played by the British character actor Ian Abercrombie, who died Thursday at the age of 77.

Most of Abercrombie's early work was on the British stage. He made his American stage debut in a production of Stalag 17 with Jason Robards. He made his television debut on an episode of Burke's Law in 1965 and his uncredited film debut the same year in Von Ryan's Express. In fact, all his early film work went uncredited — including some big movies such as Star, They Shoot Horses, Don't They?, The Molly Maguires and Young Frankenstein. His first credited film role didn't come until 1978's Sextette, Mae West's final film co-starring Tony Curtis, Ringo Starr, Alice Cooper, Regis Philbin and Keith Moon, among many others.

During those 13 years of uncredited film work, Abercrombie did get credit (most of the time) for his many television series on shows such as Dragnet, Get Smart, Columbo, Barnaby Jones, Cannon and The Six Million Dollar Man.

While Abercrombie did do film work, television became his focus. Of his post-1978 feature films, the most notable ones include The Prisoner of Zenda with Peter Sellers, The Ice Pirates, The Public Eye with Joe Pesci, Sam Raimi's Army of Darkness, Addams Family Values, Steven Spielberg's The Lost World: Jurassic Park II, David Lynch's INLAND EMPIRE and the voice of Ambrose in last year's Rango.

Abercrombie still was working on his final two roles at the time of his death: Playing Professor Crumbs on Wizards of Waverly Place and providing the voice for Chancellor Palpatine/Darth Sidious on the animated Star Wars: The Clone Wars.