"You Have Nowhere to Go." 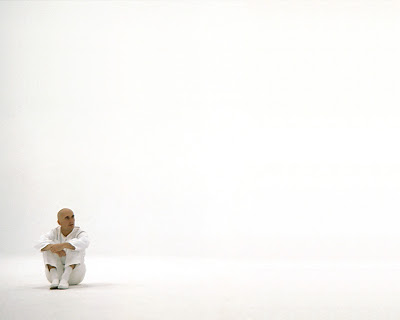 By Damian Arlyn
Forty years ago today a flawed but fascinating sci-fi film called THX-1138 was released by Warner Bros. to nonexistent box office and negative reviews. Perhaps its poor reception was due to the fact that the studio did not really care for the picture and consequently did not give it a big publicity push. Perhaps it was because the film itself was so strange, so stylized and so cerebral that it confused and thus alienated audiences. Even now it still hasn't been widely seen and enjoys, at best, a limited cult status. So, why are we commemorating the 40th anniversary of a relatively obscure and nearly forgotten sci-fi flop? Simple.

Its director was the 27-year-old George Lucas.

It's easy to forget that there was a time before George Lucas became so obscenely loved for dreaming up the "galaxy of far, far away" — and then subsequently became equally loathed for "sullying" that galaxy with some vastly inferior prequels — but it's true. Years prior to Lucas' reaping of untold fame and fortune from his entertaining space opera, he was just another up-and-coming filmmaker trying to create work that would set him apart from the crowd. While at USC he produced an intriguing live-action short film called Electronic Labyrinth: THX-1138 4EB that seemed to accomplish that very thing. The film depicted a solitary individual, with a number tattooed on his forehead, racing through various dark tunnels and passageways as he attempts to flee his oppressive society, who in turn monitor his movements and try to foil his escape. Garnering awards at various film festivals, Lucas' brainchild caught the attention of studio executives and led to a feature film adaptation produced by his friend Francis Ford Coppola's production company American Zoetrope. With a slightly bigger budget and actors of the caliber of Robert Duvall and Donald Pleasance, how could Lucas go wrong?

Before discussing the film I must confess to never having seen the original theatrical cut of THX-1138. The only version I've seen is the 2004 DVD version which includes what has now become Lucas' trademark: retro-fitted digital imagery to help bring the film closer to his "original vision." Although I am adamantly against this 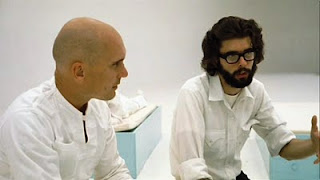 indulgent practice (particularly when the filmmaker, in an attempt to rewrite film history, makes the original version no longer available), my ignorance of the film's original state helped make the "improvements" not nearly as bothersome to me. As with the alterations made to the Star Wars movies, the changes here are primarily cosmetic in nature. Granted, there were two or three moments that completely took me out of the film because they stuck out like sore thumbs (particularly the addition of a brief CGI car chase that precedes the film's original climax), but unless someone is intimately familiar with the 1971 version, it is unlikely they are going to cringe with the frequency that I did viewing the so-called "special editions" of the Star Wars movies. Incidentally, for a more in-depth comparison of the differences between the two you can read about it here or view a short video here.

The story of THX-1138 is a rather simple one. In the underground society of a dystopian future, individuality is suppressed (as manifested by the fact that everyone wears the same outfit and has their heads shaved bald), emotions are dulled through the use of narcotics, conformity is mandated and its citizens have been all but stripped of their humanity (as evidenced by the fact that peoples names consist of a seemingly random sampling of letters and numbers). Robert Duvall plays THX-1138, an ordinary factory worker whose "mate" LUH-3417 (Maggie McOmie) rebelliously decides to stop taking her drugs and even gets him to do the same (interestingly, the motivation behind her decision is never made clear and thus is a little unsatisfying; in the similarly-themed Equilibrium, Christian Bale accidentally drops his pills down the drain and only after he begins to feel the effects chooses to remain off them). When THX starts to have intense emotions — including sexual desire for his partner — for the first time, he is captured and imprisoned by the state but eventually manages to escape and, in a third act that most closely resembles Lucas' original short, makes his way to the surface.

There is no denying the power of many of the images seen in THX-1138. Certain moments feel incredibly surreal and yet are portrayed as being frighteningly mundane. Robot police officers (precursors to C-3PO and stormtroopers) beating humans with sticks for entertainment, people expressing their guilt to a detached electronic deity in weird "confessional-like" chambers, etc. Co-writer Walter Murch has said that his and Lucas'

intent was not to create a movie ABOUT the future but rather FROM the future. Thus, many things are left unexplained and are treated just as if their existence is normal and accepted. This is what makes the film unique and yet probably turned off audiences in 1971. One can get lost trying to understand all of the technical jargon heard in the dialogue and is often left scratching one's head as to what a particular object in any given scene is. Personally speaking, I was left most confused as to whether the "hologram" SRT (played by Don Pedro Colley) that THX encounters in the white prison was an actual hologram who somehow found a way to come into existence or simply the human actor that was used to create the hologram. The movie never explains this and it betrays, I think, Lucas' tendency to gravitate more toward symbolism and allegory than verisimilitude in storytelling. Inevitably, I concluded that the best way to enjoy the film was to simply surrender to the world Lucas has created...and what a world it is.

Lucas manages to fashion an environment that is simultaneously immense and claustrophobic. In a way it is just as detailed and involving as any of those seen in the Star Wars movies, yet colder, bleaker and more bizarre. This is a place that seems just as real and believable as Tatooine, Hoth or Endor but it is not a place in which you would want to actually spend any time. In fact, it's a world so endlessly fascinating and complex

that it is somewhat of a shame that the movie doesn't find some other way to resolve it than with a a simple car chase (one can feel Lucas' love of racing vehicles emerging from the film's climax). Maybe this was an attempt on the part of the studio to inject some excitement into what was, after all, supposed to be just another Hollywood product. Maybe it was Lucas' attempt to retain the visceral spirit of his original short film. I don't know. Nevertheless, in spite of its lofty ambitions, in the end THX-1138 still tries to come out an entertaining "popcorn" movie and it's a little disappointing. It would be as if Kubrick had decided to throw an epic Moonraker-esque space battle at the end of 2001. To that end, Lucas would make a much more consistent product six years later. Though not nearly as esoteric and intellectual as THX-1138, Star Wars at least wore its intentions on its sleeve and ended up being a less schizophrenic finished product.

It is interesting to view THX-1138 now with the knowledge of what Lucas would later become. Some have reveled in the apparent irony that at one time Lucas was the equivalent of the Robert Duvall character and yet has now become the incarnation of the powerful, evil establishment that oppressed him. Whatever you think or feel about Lucas, his first feature film, while not great (as far as cinematic representations of nightmarish Orwellian futures go, I prefer Terry Gilliam's Brazil), is still pretty good and definitely worth seeing...if for no other reason, than to witness the sheer potential exhibited by its writer-director. It was a potential that would only later be fully realized. Unlike the voice that informs Duvall that he cannot escape, that he has "nowhere to go," George Lucas clearly did have somewhere to go.