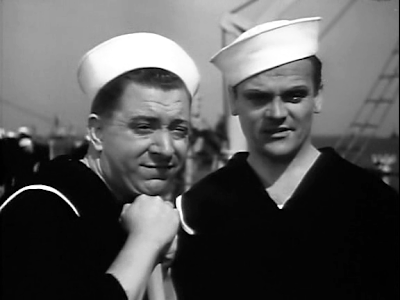 By Edward Copeland
In 1934, the Academy of Motion Picture Arts and Sciences nominated 12 movies for best picture. I've seen all but three now (Flirtation Walk, The House of Rothschild and The White Parade), but aside from two unquestionable classics (the winner, It Happened One Night, and The Thin Man), a lesser Astaire-Rogers musical (The Gay Divorcee) and a mix of the watchable, bloated and melodramatic (The Barretts of Wimpole Street, Cleopatra, Imitation of Life, One Night of Love and Viva Villa!), none of the nine nominees that I've seen have been as big a headscratcher as far as its inclusion goes as Here Comes the Navy.

It's not that Here Comes the Navy qualifies as a truly awful piece of filmmaking, it's just that there isn't anything about it that screams best picture contender. A lot of 1934's best picture nominees are weak, but you can see how they fit that Academy's King's Speech-type formula. There isn't any of those elements to spot in Here Comes the Navy.

Before I go into more detail about Here Comes the Navy itself, I thought I might list a few 1934 titles that I think were far more deserving of best picture nominations than well, hell, just about all of them I've seen except It Happened One Night and The Thin Man.


What a surprise. They never got it right, even when Harvey Weinstein hadn't been born. Anyway, Here Comes the Navy for the first time teamed James Cagney and Pat O'Brien, who would go on to be paired in much better or at least more interesting films such as Angels With Dirty Faces, The Fighting 69th, Ceiling Zero all the way up to Milos Forman's Ragtime.

As it opens, "Chesty" O'Connor (Cagney) and his buddy "Droopy" Mullins (Frank McHugh) are civilian riveters doing repair work on the naval battleship the USS Arizona, something naval officer Biff Martin (O'Brien) thinks sailors should be doing. Chesty starts mocking the officer and at the riveters' ball, where the trophy for a waltz contest takes its name for O'Connor, it leads to a fight between the two men that results in Biff winning the dance contest, stealing Chesty's girl Gladys (Dorothy Tree) and costing Chesty his construction job.

Determined to get even, Chesty (with Droopy tagging along) joins the Navy in hopes of getting assigned to the Arizona and handing out some vengeance on Martin. As luck would have it, Chesty and Droopy do get assigned to the Arizona. On one of their first days aboard, Droopy spots an attractive woman paying a visit. "Holy smokes! Look at the trimlines on that destroyer!" he says to Chesty, who tries to slow him down, having been burned on the fairer sex after the Gladys incident. "I had a piece of silk, took me for a joy ride, keep me flat broke, get me beat up and get me thrown out of my job in the bargain. To add insult to injury, she ties up with the guy who put the lug on me," Chesty tells him. A lot of the dialogue has that rat-a-tat-tat rhythm to it.

He doesn't stick to his word long, encountering the woman named Dorothy (Gloria Stuart of Titanic fame) at the telegraph office while on shore leave and begins to woo her. Unfortunately, she turns out to be Biff's sister. You can guess the complications that ensue.

Most disturbing, as you often find in older films, are the instances of racial stereotyping. When Biff stops Chesty from getting liberty even though he received an urgent telegram from Dorothy saying she needs to talk to him that night, he buys the liberty pass from Cookie (Fred "Snowflake" Toones), an African-American sailor and walking inventory of racist stereotypes. Making matters worse, so Chesty can use the pass, Cagney dons blackface to slip past the officers and off the ship.

Truly, the most interesting aspect of Here Comes the Navy is that the Navy allowed them to film on the actual USS Arizona which would be sunk seven years later when the Japanese attacked Pearl Harbor. The movie received no other Oscar nominations except for best picture which makes the fact that it somehow garnered that one all the more puzzling.

Comments:
Cagney dons blackface to slip past the officers and off the ship.

As I was reading your summary, I kept asking myself if I'd seen this film before or not. When I got to the above sentence, it all came back to me. It was a pretty boring film, if I recall, just a regular old programmer with no imagination. My completely wild speculation is that the Academy wanted to include a comedy... but, as you said, "Twentieth Century" was released that year.