Frankenstein on the verge of a nervous breakdown 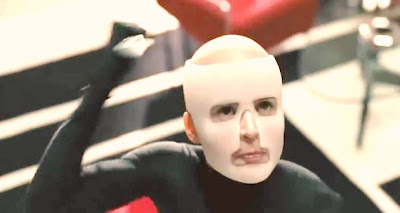 By Edward Copeland
Now, I realize Frankenstein actually refers to the mad doctor, not the monster he's created, I'm actually alluding to the life that Dr. Robert Ledgard (Antonio Banderas) plays God with in Pedro Almodóvar's The Skin I Live In as the one teetering on the brink of madness. On the other hand, Dr. Ledgard, a very successful plastic surgeon driven to his sick experimentation by a pair of family tragedies, doesn't possess the soundest mind either. With his latest, Almodóvar once again dares to strike out in a new direction that still touches upon his recurring themes of sexuality and perversion alongside twists of fate and in time, only in this outing, the writer-director casts his tale in the mold of an old-style horror flick restyled in the brash and vivid colors for which he's known.

While The Skin I Live In certainly provides surprises and never lags, it doesn't quite reach the glorious heights of Almodóvar's amazing run that can be traced back to All About My Mother in 1999. In his film prior to this one, the great Broken Embraces, Almodóvar made his homage to a Hitchcock thriller and gave Penélope Cruz one of her very best roles. With The Skin I Live In, Almodóvar and his brother, Agustín Almodóvar, adapted the late Thierry Jonquet's novel Tarantula. I haven't read the novel but from reviews I gather the Almodóvars only have changed some minor details and the director's concoction comes off like a hybrid of Frankenstein (or maybe Bride of Frankenstein makes for the better comparison) and Georges Franju's Eyes Without a Face.

As the film opens, Ledgard attends a medical conference where he explains pioneering research he's made in developing an artificial skin that's impervious to burns and other damaging injuries, displaying his test subject that he has named Gal, who died years earlier in a fiery car crash. He tells his colleagues he's been conducting his experiments on mice, but confides to a friend that he has been using human skin cells in a process similar to cloning that's illegal under Spanish law. His friend warns him to stop. His friend doesn't realize that Robert hasn't shared the true story of what's going on and skin experimentation would be the least of his concerns.

Back at his palatial home where Robert also treats his plastic surgery patients, he keeps "Gal," only she goes by the name of Vera Cruz (Elena Anaya) and Robert doesn't let her leave her room without being under his supervision, which Vera should be used to since Robert monitors her constantly on closed-circuit TV and, when he can't be at home, hands the task of watching and feeding Vera off to his longtime family housekeeper Marilia (Marisa Paredes), who holds several secrets of her own, including the whereabouts of her criminal son Zeca (Roberto Álamo).

While Robert's construction job on Vera sounds like a scientific makeover along the lines of how Scottie attempts to transform Judy into Madeleine in Vertigo, the story doesn't come close to being that simple as we get a length flashback about what happened to Robert and the real Gal's daughter Norma (Blanca Suárez). Writing in too much detail about The Skin I Live In definitely runs the risk of ruining the film for future audiences, not just by giving away spoilers but because the twists turn out to be so bizarre — bordering on the horrifying.

Alberto Iglesias, who has scored every Almodóvar film dating back to 1995's The Flower of My Secret, composes music that matches The Skin I Live In's unusual tale perfectly and marks Iglesias' second-best 2011 film score after his Oscar-nominated work in Tinker Tailor Soldier Spy (which should have beaten the overblown blaring of The Artist, which won).

Banderas reunites with Almodóvar in a feature for the first time in 21 years since Tie Me Up, Tie Me Down and he's fine in a rather stoic performance. Anaya, who had been in smaller roles in films as varied as Talk to Her, Cairo Time and Van Helsing, gives a solid turn as the captive Vera. Frequent Almodóvar player Paredes, probably known best from her work as the famous actress whose autograph the son seeks in All About My Mother or as the ghostly orphanage proprietress with a wooden leg in Guillermo del Toro's The Devil's Backbone, turns on the anger, guilt and rage as Marilia, the only person who seems to know all the truths.

As I've said for quite some time now, Almodóvar truly has transformed himself into one of the world's most fascinating filmmakers by moving away from campy and repetitive sex farces and delving into deeper emotional territory and expanding into other genres. Almodóvar doesn't hit a home run every time, but for more than a decade now, he always manages to get on base.