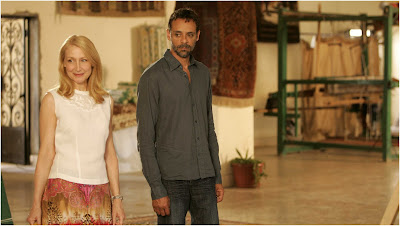 By Jonathan Pacheco
Not every film we see needs to satisfy our desires for the epic and mind-blowing. Just plain good films fill out the gaps between the monumental ones of our cinematic lives, like sand settling between rocks. We complain and yearn for the rocks, the experiences that push us to emotional extremes, but truly, there's nothing wrong with the sand. Many of us are guilty of underappreciating the likes of Cairo Time, a small, unassuming Canadian film by Ruba Nadda that displays sensitivity, restraint, and nuance in the face of a potential extramarital affair.

Like the film itself, the central relationship of Cairo Time — between Juliette (Patricia Clarkson), the wife of a U.N. official, and Tareq (Alexander Siddig), the husband's good friend and former security officer — is a gentle bond with no pretensions and no forced dramas, a sort of friendship quietly settling within the cracks of Juliette's marriage. On vacation in Cairo and waiting for her husband to work out a sticky situation in Gaza so he can join her, Juliette finds herself calling upon the company of Tareq during the lonely (and occasionally mildly dangerous) days of sight-seeing.

Nadda directs her film with no obligations, so while the subject matter may retrace familiar ground, Cairo Time is never pressured into faithfully following through with clichés. The anxiety brought on from anticipating lazy and unoriginal writing vanishes as Nadda, with understanding and patience, exhibits control over her picture, dialing down emotions a little to prevent events from escalating to unrealistically dramatic levels.

Sleazy men leer at Juliette as she walks the Cairo streets alone, dressed in a casual short-sleeved blouse and an airy, lengthy skirt — typical and tasteful for a Westerner her age, but a bit risqué in her new surroundings. The men brush up against her and whisper vulgarities in her ear, but instead of pounding the viewer with drama and physical confrontations, Nadda diffuses the tension when Juliette ducks into a nearby shop to find rescue in its owner, an older Egyptian gentleman who, at the sight of Juliette's shaken expression, shoos away the would-be stalkers. This is the kind of wisdom and control you don't find in the likes of the culturally condescending Sex and the City 2.

Most importantly, you also find this restraint in how Nadda develops Juliette and Tareq's relationship. There's no rush to physicality or marital betrayal because, as excellently conveyed by Clarkson's mastery of one-sided telephone conversation scenes, Juliette loves her husband, and if we are to accept that, we should probably conclude that she wouldn't be quick to run into the embrace of another man, if ever. This "thing" sparking between these two, whatever it may be, has less to do with the small physical touches and displays of chivalry — as exciting as they may be — and has more to do with companionship and time. That word, time, so appropriately placed in the film's title. Fate, romance, circumstances — those aren't the causes of this growing relationship. It's time. Time builds friendships of all intimacy levels. And as she waits endlessly for her husband's return, Juliette is swamped with time.

In a scene before an Egyptian wedding, Juliette speaks to the mother of the bride about her own son's marriage, saying it felt like he didn't belong to her anymore. The scene ends, and those words hang in the air, almost oddly; the film has little to do with children and letting go of them, but it actually has a lot to say about "belonging." Juliette and Tareq don't belong to each other, not in the marital sense, but the time they spend walking the streets, seeing the Nile, attending this wedding — this time is their own. At the reception, as Tareq dances with the former "love of his life," it's evident that they're reliving, for that brief dance, the time that belonged to them many years ago, and as they do so, the look on Juliette's face tells us that she also is realizing that this time, soon coming to an end, is all she will ever have of this man. But it's a special time, powerful enough to cause her to consider things she'd never anticipated considering.

In a summer where we're bombarded with ads for the flagrant Eat Pray Love, Cairo Time is a relief, a modest relational study unconcerned with genre rules and expectations and more interested in spending time in the company of true emotions.