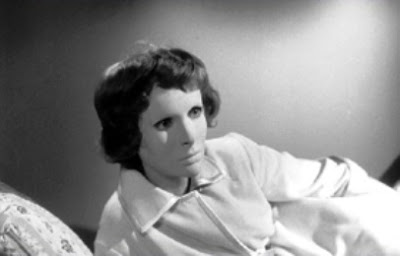 By Edward Copeland
As the 2007 movie award season has drawn to a close, I've been able to go back to my attempt to see as many of the films that made our Satayajit Ray Memorial Anything-But-Definitive List of Non-English Language Films as possible. Recently, I caught up with the No. 74 film on the list, Georges Franju's Eyes Without a Face.

For the uninitiated, Eyes Without a Face is essentially a horror piece, telling the story of Dr. Genessier (Pierre Brasseur) and his quest to help his daughter Christiane (Edith Scob) restore a horribly disfigured face.

Unfortunately, the project drives the good doctor a bit mad since it involves abducting young women and attempting to surgically remove their face and attach it to his daughter's. Part of me wondered if Leatherface of Texas Chainsaw Massacre might have been a foreign film connoisseur and developed his habit after seeing this film.

Assisting Dr. Genessier is his faithful assistant Louise (Alida Valli), herself a beneficiary of his experiments. Being a child of the 1980s, I have to admit that it was difficult watching the film at times without Billy Idol's tune of the same name running through my head, but thankfully Franju's atmospherics along with Maurice Jarre's musical score kept Idol at bay most of the time.

What's particularly interesting about Jarre's score is that it seems specifically to use Valli's association with Carol Reed's masterpiece The Third Man to accompany Louise's errands with a tune that strongly evokes Anton Karas' incomparable score from Reed's film.

Clocking in at a brisk 90 minutes, Eyes Without a Face is suitably spooky and has wonderful cinematography by Eugen Schufftan, but after seeing it, I admit I'm surprised that it made the Ray Memorial List as high as No. 74. It's good, but not startlingly good and seems more like an expanded episode of The Twilight Zone.

On top of that, it's fairly clear how the tale will wind up, so its suspense factor is lacking. It is certainly creepy and worth watching, but not something I'd label as one of the best non-English language films of all time.

Comments:
A beautiful and frightening film. The surgery scene and the scenes that follow are especially powerful and it's incredible how good the effects are. One of my favourite horrors.

This was considered, er, cutting edge horror back when it was first released. In retrospect it seems pretty tame, but once upon a time it was considered very extreme. The white mask has become iconic.

I saw this after the list came out too and thought it was wonderfully atmospheric--that drive down the deserted road, with the branches reaching out! My kind of horror film, that is to say, spooky but not gorey.

I have to agree with you though, its inclusion was a bit puzzling and probably had more to do with its influence than anything. I certainly wouldn't rank it above Pather Pachali. Poor Mr. Ray!