When you go from well-off to jobless 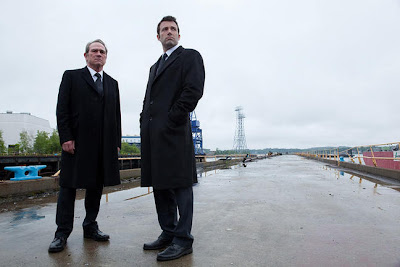 By Edward Copeland
One side of the economic meltdown that the media didn't cover very well (Who am I kidding? The media didn't cover any of it well.) was the plight of a certain segment of the newly unemployed, namely those making six-figure salaries and above who found themselves suddenly jobless. Sure, some Americans couldn't pay for prescriptions and groceries, but other victims weren't able to pay dues at country clubs and had to give up golf! Now, I may sound as if I'm mocking them, but the film that tells their story, The Company Men, does evoke some sympathy for its upper class characters occasionally, but it never leaves your mind that there were and remain people much worse off than these men lamenting the loss of expensive meals and fancy toys.

The Company Men marks the feature writing-directing debut of John Wells, best known for his television work as executive producer on such hits as ER and The West Wing, and the movie does have a bit of that efficient set-it-up and wrap-it-up flavor of those series about it.

The movie focuses on three executives at GTX, a giant transportation corporation: Bobby Walker (Ben Affleck), a 37-year-old v.p. account executive; Phil Woodward (Chris Cooper), a 30-year veteran of the company who started there when it was just a small shipbuilding operation and he was one of the builders; and Tommy Lee Jones as Gene McClary, one of the very top executives, but no longer the one who makes final decisions despite the fact he started GTX in the first place.

The film opens with the ultraconfident Bobby bouncing into work one morning, expecting to find a usual day only to feel some tension and a request to see a higher-ranking exec, Sally Wilcox (Maria Bello), right away. When he gets to the meeting room where she's waiting, he learns she's there to present him with his severance package — he's one of 200 getting the axe that day. They also are closing shipbuilding operations in two cities.

This news does not go over well with Gene when he returns from a trip where he's given blunt answers when asked about the outlook for GTX's future earnings prospects. When he's back in the Boston headquarters, he learns of these developments from a worried Phil, who fears he'll be on the chopping block soon and he's too old to start over. Gene demands to see Sally immediately and finds her in a meeting with other top executives, including the chairman and CEO and supposedly Gene's "best friend" James Salinger (Craig T. Nelson).

Salinger takes Gene out to talk privately and harangues him for making such a public scene, especially since he needs to accept that shipbuilding may have launched GTX, but it's a losing proposition now and they have to concentrate on their divisions that make money such as health care (how a transportation company expanded into having a health care arm seems odd and goes unexplained) to please shareholders. Gene feels betrayed, because he felt Salinger was his friend and waited purposely until he was out of town to make these moves.

Bobby doesn't take his firing well and acts with quite a bit of arrogance in the beginning when he's not immediately in the running for jobs with similar salaries and he's not ready to give up his lifestyle, until his wife (Rosemarie DeWitt) basically forces him to face that reality. Early on, it's hard to have much sympathy for Bobby as he yells and whines with indignation about how he has an MBA. Later, when he lashes out at his son and tells him he's busy and to go play on his XBox, I almost had to stifle a laugh when his wife informs him that boy returned the video game machine because he knew they were having money problems. Hope he kept that receipt. How long had they had it? It felt like a scene got cut somewhere, but still...oh, the sacrifice.

Bobby has to make a bigger sacrifice than his son when he finally drops his pride and goes to work for his brother-in-law Jack at his small construction company. It's not the huge drop in pay and the manual labor that puts Bobby to the test, it's that Kevin Costner plays Jack, using the same awful New England accent he couldn't pull off in 13 Days and that still sucks now. Why does Costner insist on trying to do accents and, more importantly, why do directors let him ruin even small parts of their movies by letting him do it? It isn't as if Costner's status as s superstar remains what it once was, so surely they can no to him. Hell, since he doen't have that pull anymore, why are they hiring him in the first place, accent or no accent?

The usually reliable Cooper really gets the most thankless role (actually the second most thankless after Bello) in the film. From the moment Phil Woodward appears on screen, you can predict his entire story arc. Wells' dialogue telegraphs Phil's journey so obviously that Cooper really can't do much with his part and that's a shame for this great actor. He deserves so much better. He got more out of his single scene in Affleck's The Town than he gets in this entire movie.

Jones comes off best, since Gene's position differs from the other two men. When he inevitably gets his walking papers, he still owns a lot of stock options and can maintain his lifestyle to some extent, though they sort of gloss over the fact that he's having an affair with Bello's character and leaves his wife for her after he's fired (by Bello's character no less). He gets a couple of good speeches when he shows Affleck's character what the company was like in the beginning and when he admits that he got used to having expensive meals and flying on corporate jets.

Nelson has been cast as the villain of the piece, but he's a particularly one-dimensional villain whose suits might as well have been made out of cardboard, but then Wells' script doesn't try to go too deep on anything. Again, it goes back to the way his TV series were: They aimed neither for complexity nor gray areas and The Company Men doesn't make that attempt either. Slick and simple remains Wells' modus operandi in film as it does on series television.

To make matters worse, The Company Men even tries to tack on its version of a happy ending, or at least a promising one. The whole movie seems to undermine itself at every turn. It would have been an interesting idea to examine another side of the fallout of the economic crisis, but this movie doesn't present that story, at least not well.

Charles Ferguson's documentary on the financial collapse, Inside Job, ends up containing more information, more drama and more entertainment than The Company Men.