The United States of Goldman Sachs 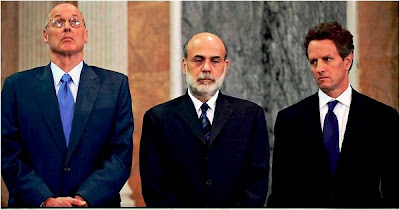 By Edward Copeland
In 2007, Charles Ferguson directed the great documentary No End in Sight. Last year, he helmed another that told the story of an entirely different type of destruction, Inside Job, only this time the war wasn't against another country, it was against the world's financial system and instead of only those actually in Iraq and their families paying a price, we all suffered for Wall Street's greed and Washington's malfeasance.

As Ferguson did in No End in Sight, he makes a very complicated subject easier to understand through his masterful presentation of the facts and history of the situation (narrated by Matt Damon here) and interviews with key subjects. It's not an easy task in Inside Job because trying to explain the mechanics of financial derivatives and its role in the economic collapse is nowhere near as easy to do as it was to show all the mistakes and blunders involved in the Iraq war.

Not surprisingly, most of the key figures such as Alan Greenspan, Timothy Geithner, etc., refused to be interviewed for the film, but what's shocking is that Wall Street and financial service figures who do give interviews feel completely at ease showing their arrogance and defending the industry's actions.

Inside Job, briskly edited by Chad Beck and Adam Bolt, shows how decades of deregulation under presidents of both parties led to one crisis after another, each bigger than the last, with seemingly no one in Washington learning any lessons.

The film also provides fascinating tidbits such as the fact that as recently as the early 1970s bond traders' salaries were low enough, that some had to take second jobs to make ends meet. It also tells how employees of various financial firms engaged in cocaine-fueled parties with prostitutes which were billed to the companies as things such as computer supplies.

The handful of firms who would tell their clients a purchase was good while betting on its failure behind their back is staggering, though not as staggering as the refusal of regulators to do any regulating or the number of former top Goldman Sachs executives who end up serving in presidential administrations of both parties. (When Hank Paulson stepped down as Goldman CEO to be Dubya's treasury secretary, he had to sell $450 million in Goldman Sachs stock but thanks to a law signed by the first Bush, he paid exactly zero taxes on it and some say the rich are taxed too much?)

Ferguson's No End in Sight proved to be not only informative, but to provoke outrage at all of the things that were and weren't done prior to the Iraq war. Inside Job does just the same for the history of the financial collapse, especially when you see all of the names who profited from Wall Street's greed that have populated the Obama Administration, not that he invented the problem.

It began with Reagan, got worse with the first Bush, declined further under Clinton and took the big nosedive under the second Bush. Now, Obama's advisers come from the same group and Congress passes reforms without teeth because Wall Street controls what happens. Inside Job tells this infuriating story in great detail and it tells it well.

Comments:
Isn't this the most informative, and infuriating, documentary? I still seethe with this one. Simon Johnson and James Kwak's book/audiobook 13 Bankers is another great source and revealing read re: this. Thanks, Ed.