Shoot It!: Hollywood Inc. and the Rising
of Independent Film by David Spaner 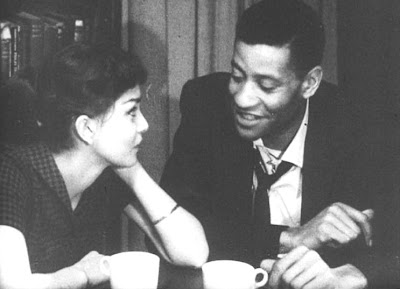 By Edward Copeland
When you've seen as many films as I have over the course of my decades of serious moviegoing, it becomes harder and harder for one to spring a surprise on me. That's pretty much the case whether the production originated in a Hollywood studio with a big budget or was made on a shoe-string independently. However, the cliché "You can't judge by its cover" became one because that adage proves to 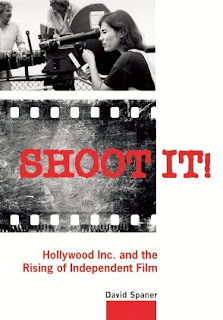 be true time and time again. I found that out when I got an advance copy of the just-released book Shoot It!: Hollywood Inc. and the Rising of Independent Film by David Spaner. Given its title and jacket description whose first paragraph reads that it "is a revealing history of how Hollywood, with its eye on the bottom line, lost its ability to support the work of creative filmmakers; it also is a passionate portrait of American independents, and others outside the studio system, who have risen up to fill the void." If I had read closer and all of the jacket before starting the book itself, I might not have gone in with the expectation of another book positing the notion that indie is always good and Hollywood is always bad. Nothing could be further from the truth about Shoot It!, which misleads somewhat with its title. Spaner's book turns out to be a compulsively readable, well-researched book that explores many aspects of Hollywood history and how it has related to independent film ranging from a great beginning section exploring the blacklist and how the studio bosses backed it not out of fear of Washington but as a means of breaking the backs of labor unions to the bullying and strongarm tactics of Jack Valenti, the late Motion Picture Association of America president, who helped the U.S. push for trade pacts with other parts of the world as long as they included ways to stomp out those countries' film industries and fill those screens with American films. Shoot It! isn't a how-to book or a regurgitation of the stories of indie film icons we've heard dozens of times — Spaner's book turns out to be so much greater than that and should be a must read for anyone interested in Hollywood's inner workings from the beginning as well as the struggles of new filmmakers in other countries.

Spaner lives in Vancouver and has worked as a movie critic, feature writer, reporter and editor for various newspapers and magazines. Previously, he wrote the book Dreaming in the Rain: How Vancouver Became Hollywood North by Northwest.

Shoot It! reads quickly and compiles a massive amount of information in relatively small number of pages with extensive endnotes that cite the sources for every chapter. Spander divides his book into two parts. The first deals extensively with the history of American film from its earliest days.

I'm always fascinated by any accounts of the Hollywood blacklist, but Shoot It! paints one of the few accounts that paints the cooperation of studio heads such as Louis B. Mayer, Jack Warner and especially Walt Disney who had less a fear of commies but of union troubles. In fact, one of the main reasons movie production moved west in the first place was to escape strong unions on the East Coast. As everyone should realize by now, scratch the surface of any major problem in this country and you'll find greed and money as a root cause.

Spaner also makes an interesting case for the rising of independent filmmaking being spawned not just from the obvious sources such as John Cassavetes and his groundbreaking Shadows but the way the influx of method actors on the big screen such as James Dean, Marlon Brando, etc., not only changed screen acting but the atmosphere that allowed for behind-the-camera personnel to experiment as well.

Shoot It! also explores the various waves and locales of indie movements and how studios always eventually attempt to co-opt the movement right through today with their "specialty divisions" so that much of what gets labeled independent truly isn't independent.

He quotes the recently passed Bingham Ray's experiences as the founder of October Films who realized how fake the studio independent world was when October was acquired by Universal in 1997 and Universal balked and distributing Todd Solondz's Happiness.

"The dream of being able to work within the studio system as some maverick, autonomous independent — it was just total horseshit." — Bingham Ray

Part II of Spaner's book actually turns out to be its most illuminating part because it covers material that was largely new to me by looking at the history of independent film in other countries and, more shockingly, the shocking tactics the MPAA practiced as Hollywood's lobbying arm to ensure that American films dominate movie screens around the world, decimating the industries in many countries as a result unless they valued their culture enough to stand strong and impose quotas requiring that a certain number of screens be devoted to films made in their own countries. It's not as if these trade pacts, most agreed to when Jack Valenti still lived and headed the MPAA, were reciprocated with the U.S. giving films from other countries equal access.

Spaner begins discussing the memorable student protests in Paris in 1968 when the French government fired Henri Langlois as the director of the Cinémathèque Française, an event depicted in Bernardo Bertolucci's film The Dreamers. Langlois became a hero of the French New Wave by his screenings of Hollywood classics and the latest in European cinema. Letters denouncing his firing arrived from notables such as Hitchcock, Fellini and Kurosawa while the leaders of the New Wave such as Godard and Truffaut took part in demonstrations with the students. Truffaut even was injured when clubbed by police. As Spaner writes, the French do two things better than anyone else — make films and riot.

That sort of French spirit held out against Valenti in the early 1990s when he demanded that culture be included in the new General Agreement on Trade and Tariffs. It was one of Valenti's few defeats and eventually resulted in the dissolution of GATT and the creation of the WTO.

Back in early 1993, when The Crying Game opened in my hometown, I got to do a phone interview with director Neil Jordan. I asked him about the difference between the U.S. film industry and the British one. He answered, "There isn't one." Reading Spaner's chapter on Britain's film industry, I see now how understated Jordan was being. Britain's industry was decimated, not only by Hollywood muscling its way onto all of its screens but also by Tory governments beginning with Margaret Thatcher stripping away film funding.

After World War II, in an attempt to rebuild its shattered infrastructure, England had imposed quotas and levies — that's why U.S. and British prints of films shot in England such as Night and the City and The Third Man would be different. In 1983, Thatcher's government put an end to a lot of what made those great British films of the 1950s and '60s with one of its final acts.

Thatcher's Films Acts of 1985 abolished the National Film Finance Corporation, which had provided small loans to companies to make films to fill the quota; and the Eady Levy, which was seen as too burdensome for exhibitors, was also eliminated that year. By the late 1980s, British cinema had a smaller share of the box office than at any time since the 1920s.

Spaner also looks at one of the few other countries to escape the U.S. stomping — South Korea, which explains why we've been seeing so many great films emerging from that market. Shoot It! also provides an interesting look at the burgeoning film world of Romania which never had any after decades of first fascist then communist oppression.

One of the saddest tales comes in the chapter on how Mexico's industry got crushed when Vicente Fox signed NAFTA in good faith. Between 1984 and 1994, Mexico produced 747 feature films. In 1995, it made five. Even with breakout directors such as Guillermo del Toro, Alfonso Cuaron and others, Fox's elimination of any quotas or subsidies have made their movies more successful elsewhere. In 2004, Mexicans bought a record 164 million movie tickets, but less than 8 million of those tickets were purchased for movies produced in Mexico.

Shoot It! does what any good nonfiction book should — it informs and backs up its facts with solid sourcing. For people interested in film history and its intersection with politics, it's a must read.