From the Vault: Neil Jordan 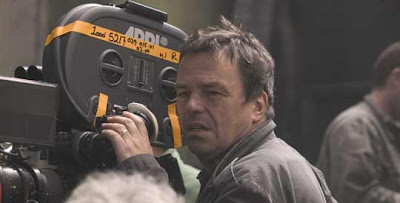 ORIGINALLY PUBLISHED FEB. 19, 1993
Neil Jordan may well have created the most difficult-to-describe film of all time with The Crying Game — and movie lovers should thank him for doing so. The film has garnered a lot of press about how highly classified the movie's plot twists should be, so much so that indeed the tight-mouthed strategy has lessened the film's impact for some later viewers, who strain themselves trying to outwit the film instead of enjoying it. So, who better to ask for a simple way of describing The Crying Game than to talk with the man who wrote and directed the film — Neil Jordan himself.

"(The Crying Game is) a love story that comes out of all sorts of extremes and emotions."

The film begins in Northern Ireland where members of the Irish Republican Army abduct a British soldier (Forest Whitaker) in hopes of exchanging him for a captured colleague. From that point on, the film charts a formula-defying course that leads to romance, suspense, humor and pathos.

While The Crying Game didn't premiere until 1992, the ideas behind it have been lurking in Jordan's mind for a decade. "It crept up on me," Jordan said. The kidnapping element came first, but the secrets followed soon after.

"I came back to it about a year ago. I hadn't done this before then because it was so potentially explosive. The idea fascinated me. It had been in the back of my mind about 10 years."

Jordan, who had earlier scored with 1986's Mona Lisa and had unhappy Hollywood dealings with High Spirits and the remake of We're No Angels, had a simple answer when asked if this British production by this Irish director could have been produced by a Hollywood studio.

Indeed, the twists, which new viewers should not try to outguess, in the script for The Crying Game couldn't be sold to Hollywood. Ironically though, the American film industry has fallen in love with the finished product and Jordan is signed to direct the long-awaited film version of Interview With the Vampire.

Jordan, 42, broke into the film industry in his native Ireland where he worked as a novelist. When director John Boorman needed some help on the final draft of his film Excalibur, he tapped Jordan for help and Jordan has been involved in filmmaking ever since.

The biggest difference between the film industry in Britain and Ireland, as compared to that of the United States, is that "There isn't one," Jordan said. Consequently, the most talented of filmmakers from the United Kingdom, such as Jordan and Stephen Frears, inevitably have to come to America to make a living. The Crying Game, which has been nearly universally embraced by American critics, has had varied reaction in Ireland itself, given the film's IRA aspect.

"(The Irish are) disturbed by the IRA angle. Once you mention the IRA in Ireland, you get a lot of reactions. You are accused of supporting them, you're accused of opposing them."

However, Jordan also feels that the Irish "have been very challenged by the film, as if they need it really. It's a very conservative culture and it's gone through a huge amount of change." Jordan though worries that the hype surrounding the plot will get in the way of the film's enjoyment.

"(The twist is) not a gimmick. It doesn't depend upon it. If you go back through the film again, it doesn't depend on it. You can see it in a more refreshing way because what happens in the first viewing is so startling ... you realize that (kidnapping sequence) is very much a seduction by Forest Whitaker."