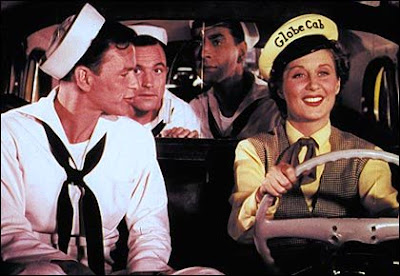 With a talent that spanned generations, decades and the mediums of stage, screen and television and who kept working almost to the very end, we have lost the great Betty Garrett, who has passed away at the age of 91.

Born May 23, 1919, in St. Joseph, Mo., Garrett debuted on Broadway in 1942 in the musical revue Of V We Sing, one of many musical revues in which she took part in the beginning of her stage career that were intended as rousing support for our troops serving in World War II.

Her third Broadway production certainly sounded like more of the same with the title Something for the Boys, but it was an original musical comedy produced by Michael Todd with songs by Cole Porter, a book by Herbert and Dorothy Fields and starring Ethel Merman. Garrett not only had a part in the show, she also served as Merman's understudy, but as her reputation goes, Merman never missed a performance.

She followed that with another musical comedy called Jackpot where her co-stars included Nanette Fabray and Mary Wickes. Her final Broadway appearance of the 1940s would be the musical revue Call Me Mister where one of her co-stars was Jules Munshin, who would appear in one of her biggest successes where she was heading: Hollywood.

She made her film debut in 1948's Big City about an abandoned baby raised by three men who grows up to be Margaret O'Brien and, though the film wasn't really a musical, gets to have her young singing voice dubbed by Marni Nixon. That same year, she did co-star in a musical, Words and Music, a fictionalized version of the story of Rodgers and Hart that dragged out practically every MGM star available such as Judy Garland, Gene Kelly, Mickey Rooney, Cyd Charisse, etc., to play either themselves or characters. Both of Garrett's first two films were directed by Norman Taurog.

1949 brought three big movie musicals for Garrett, including one of the best of all time. Busby Berkeley directed her in Take Me Out to the Ball Game, which for the first time put her in the same film with Kelly, Jules Munshin and Frank Sinatra, tossing in Esther Williams for good measure.

She worked with Williams again as well as Ricardo Montalban and Red Skelton in the musical comedy Neptune's Daughter, which featured Frank Loesser's Oscar-winning song "Baby, It's Cold Outside."

Garrett's final 1949 musical though is the one that has stood the test of time. Pairing Stanley Donen and Gene Kelly as co-directors for the first time and starring Kelly, Sinatra and Munshin as three sailors on leave in New York, On the Town really raised Garrett's profile with her role as Hildy (short for Brunhilde), the man-hungry cab driver. With its screenplay and lyrics by Comden and Green and music by Leonard Bernstein, it's still a blast.

Unfortunately, the communist witchhunt brought Garrett's career at that point to a screeching halt. She was married to actor Larry Parks, who admitted membership in the communist party, but refused to name names before the House Un-American Activities Committee. This also coincided with Garrett being very pregnant with their child. The two survived in nightclubs, but Garrett didn't resurface on Broadway or movie screens until 1955 when she landed a role in the movie My Sister Eileen with Janet Leigh and Jack Lemmon. That same year she began making TV appearances on some episodes of The Ford Television Theatre.

In November 1956, she returned to the Broadway stage, replacing Judy Holliday in Bells Are Ringing during Holliday's vacation. She returned to the Great White Way again in 1960 in the original musical Beg, Borrow or Steal and did two other appearances on Broadway as well as various episodic TV spots throughout the 1960s. 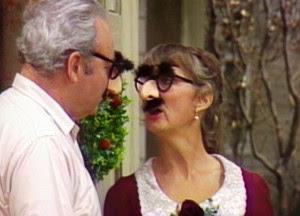 The next role that really brought Garrett back into national prominence didn't come until 1973 when she was cast in the recurring role of Irene Lorenzo, a new neighbor and foil for Carroll O'Connor's Archie Bunker on All in the Family. The role earned her a Golden Globe in 1975 for best supporting actress on television. Vincent Gardenia also was cast to play Irene's husband Frank. Garrett played Irene for 24 episodes from 1973 until 1975 when she joined the cast of another hit comedy, Laverne & Shirley. There, she played the girls' landlady Edna Babish before eventually becoming Laverne's stepmom when she wed her widowed father Frank DeFazio (Phil Foster). She stayed with the show until 1981. She never had another role as a series regular but did appear frequently as a guest, most recently on Grey's Anatomy in 2006. In 2003, she was nominated for an Emmy as guest actress in a comedy for an appearance on Becker.

She appeared on Broadway three more times: in a play, The Supporting Cast, in 1981, in a stage version of Meet Me in St. Louis in 1989 and in the revival of Stephen Sondheim's Follies in 2001, where she got to perform "Broadway Baby" as Hattie Walker.

Her final credit on IMDb is for a 2009 mystery comedy called Dark and Stormy Night starring Jim Beaver, the noble Ellsworth on Deadwood, and currently on Supernatural.

Comments:
I was so sad to hear this news. She was so talented and I loved her in On the Town and Take Me Out to the Ball Game. RIP Betty.