When radio was at its most beautiful 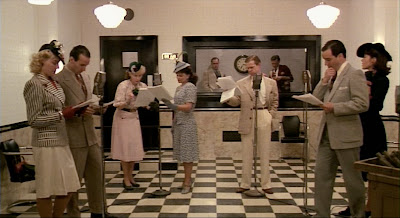 By Jonathan Pacheco
Roger Ebert once pointed out that Robert Altman kept track of time by the films he’d made. Similarly, I imagine the average cinephile has a mental timeline for his own life’s events based on the movies he’s seen and when he saw them. (I know that my first kiss came in late 1999 because it was with a girl I’d met earlier in the year through our mutual love for The Phantom Menace.) For the narrator of Radio Days (Woody Allen), childhood’s milestones are marked by memories of radio shows, newscasts and tunes.

As the film opens, he sets the scene of his youth — Rockaway Beach, N.Y., late 1930s — by first asking us to forgive him for his tendency to romanticize the past. Speaking of the rain-swept streets of his neighborhood, the overcast beaches a stone’s throw away and the peeling paint of the massive walls surrounding a nearby amusement park, he says, “I remember it that way because that was it at its most beautiful.” The same applies for the many personal memories he recounts throughout Radio Days, which turns 25 years old today.

Refreshingly, Woody leaves much of his trademark pessimism and sarcasm out of Radio Days, allowing Allen to spend less time trying to be funny and more time simply gushing with affection for Joe, his on-screen childhood persona (played by a young and tiny Seth Green), and his working-class family of parents, aunts, uncles and cousins all living beneath one roof. Sure, Joe’s mother (Julie Kavner) and father (Michael Tucker) still have their share of pointless fights typical of Allen’s autobiographical portrayals of his family life (arguing, for example, about which ocean is superior: the Pacific or the Atlantic), but there’s an endearment that still shows through the animosity, a sweetness that’s absent in some of his other films. In Radio Days, Allen depicts parents capable of simultaneously insulting and expressing love. After arguing in front of a radio relationship counselor and being told they “deserve each other,” the couple is taken aback, the mother saying, “I love him, but what did I do to deserve him?”

Sprinkled throughout the film are memories unadulterated by Allen’s wit or sarcasm, such as Joe’s remembrance of his parents’ anniversary, significant for being the only time he can recall them sharing a kiss. Or when he wakes up late one evening to find his aunt Bea (Dianne Wiest), permanently on an unsuccessful quest to find love, returning home with a date who, as she soon learns, still hasn’t recovered from the recent death of his fiancé, who also happened to be a man. Bea is crushed by this revelation, but she hides her emotions in favor of supporting a man still dealing with a lot of pain.

Allen ingeniously integrates stories of the actual radio personalities as tangential anecdotes to Joe’s childhood memories. His recollections of his family members’ favorite radio programs leads to memories of the programs themselves, leading to accounts of the personalities behind the microphones. Allen smartly resists the temptation to portray them as the “movie stars of their day,” instead depicting them as he imagined them as a child: earnest and sincere entertainers and newsmen, somehow already aware of how quickly their time in the spotlight will fade.

Having Joe’s family anchor the stories brings a cohesion to Radio Days’ many vignettes; no matter how far off topic the stories get, they all lead back to the core group, to the film’s heart. That’s why the subplot of Mia Farrow’s Sally White stands out as the film’s weakest element. It doesn’t really stem from the family’s experiences with radio the way the other stories do. Instead, the narrator’s recollections of Sally are presented as secondhand gossip, “insider” stories of how this aspiring radio star slept and lucked her way into the industry. Though her stories provide some vintage Woody Allen scenes (she escapes execution at the hands of a mob hit man when he discovers that they grew up in the same neighborhood in Brooklyn), they feel emotionally detached from Allen’s other wonderfully personal recollections.

In The Purple Rose of Cairo, Allen warns us of the dangers of escaping into the mediums we love, and in Midnight in Paris, he recognizes the folly of being too engrossed in the past. However, the director seems to have little desire in drawing any such lessons from Radio Days. In this film, he simply wants to hold on to his nostalgia, to cherish the highs and lows radio provided him. As Radio Days closes, our narrator worries that the ghosts of the radio era fade more and more with each passing year, but by making this film, Allen chooses not to let them go without a fight.

Comments:
I agree that Mia's part didn't mesh as well, but it didn't bother me that much because I enjoyed her character's transformation. Woody was able to get performances out of Farrow that no one else ever has. Even in Rosemary's Baby, while the movie is great, her acting isn't and the only film I've ever seen her in where I thought she was good that Woody didn't direct was Widows' Peak. Of course, you forgot to mention that Radio Days marked Diane Keaton's first appearance in a Woody film since Manhattan. What really impressed me about the movie was its art direction, especially in scenes on the roof of the building where the radio broadcasts originate. Then there also was the family glued to listening to the attempt the baby who'd fallen in the well which preceded the Baby Jessica story by just a matter of months.