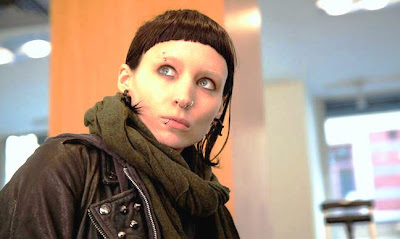 By VenetianBlond
I’m a fan. I’ve read the book by Stieg Larsson and watched the Swedish film more than once. Yes, the plot takes half the movie to really kick in, the leads are kept separate for too long, and who can believe that a print magazine is dangerous to the dominant paradigm anymore? However, I’m willing to forgive all those trespasses to take a spin through the American version of The Girl With the Dragon Tattoo, directed by David Fincher. My host, Edward Copeland, wrote about the Swedish version here.

Dragon Tattoo is just the same, only different. Mikael Blomkvist (Daniel Craig) is an investigative journalist on the wrong end of a lawsuit. It seems his inability to prove certain assertions he made in print not only ruined his reputation, but also emptied his bank account. For this reason, he decides to listen to the pitch of a retired industrialist, Henrik Vanger (Christopher Plummer), who wants to hire him for his own investigation — that of his presumed dead niece, Harriet, who went missing 40 years ago.

Lisbeth Salander (Rooney Mara) is a goth hacker — tiny, brilliant and completely antisocial. She’s been declared incompetent by the state, and must turn over her finances to a new guardian when her previous one had a stroke. The guardian, (Yorik van Wageningen) abuses her sexually, but she later gets her brutal revenge. She’s a photo negative of the Stuart Smalley platitude: she’s better than you, smarter than you, and doesn’t give a flying flip if you like her or not.

Due to her unusual skill at research, Salander is hired by the industrialist Vanger to do a background check on Blomkvist. Once he finds out who did the incredibly detailed work on him, he wants to hire that person to help him find out what happened to Harriet. Finally the two characters join forces and really get on with the investigation, and they not only discover what happened to Harriet, but also what happened to a number of other young women scattered across Sweden.

Fincher spends more time with relationships in his version. We see more of Lisbeth’s affection (or what stands for affection in her life) for her first guardian. He also gives us more of Blomkvist’s stilted relationship with his daughter. Even Lisbeth’s employer at the security firm, Armansky (Goran Visnjic), reveals a little more about how he feels about her as a person than in the Swedish films. There’s slightly more time for humor such as the look Salander shoots Blomkvist when he claims the information on his computer is encrypted.

The main difference is that it’s an American film. The actors are better looking and wear more expensive clothes. They have international pull (Plummer! Richardson! Skarsgard! Berkoff! Wright!) and perform admirably. Where the Swedish film was a workaday piece that doesn’t get in its own way, Fincher is inventive and puts his stamp on his version without reinventing the whole thing.

And there’s no good reason to since whatever plot points hold the mystery together, they aren't as important as the presence of Lisbeth Salander. Played slightly less closed off and less fierce (in my opinion) by Rooney Mara than Noomi Rapace, Salander is the reason for the international craze for the books and the greenlight of the remake. She’s not only a unique action hero, she’s a unique character. She’d be watchable even if she weren’t solving decades’ worth of brutal murders and finding the lost girl. You just have to be willing to sit through the explanations of family trees and who doesn’t speak to whom — not to mention the violence — to get to the good stuff.

But that makes it seem as if that character is the only good thing about the film, which isn’t true. It’s a thriller, and a good one, with random gunshots, secret agendas, old photographs and high tech gadgets. The original title of Larsson’s book was “Men Who Hate Women,” and viewed through that lens, the content rises above a paint-by-numbers investigative procedural. It opens up the proceedings from the individual to the societal — which becomes crucial in the second and third parts of the trilogy.

By the way, FYYFF, on one t-shirt Salander wears, is a phrase written by late New Orleans blogger Ashley Morris as a response to those who suggested that the city of New Orleans should just be left to sink into the sea after Hurricane Katrina.

Finally, the opening credits hit me like a golf club to the jaw — in a good way. A CGI music video of Trent Reznor, Atticus Ross and Karen O’s version of Led Zeppelin’s “The Immigrant Song,” it’s full of imaginative and nightmarish imagery of scales, tire treads, the actors, computer cords, insects and more.

Comments:
Just to nitpick with the idea that Americans shouldn't do remakes of foreign films, I think you're viewing it through the wrong lens. It's annoying that most people in America probably hadn't heard of the Swedish version until the American one, but that doesn't mean Fincher has finally made the "legitimate" version (although, objectively, he did make the better one.) It's just a sad fact that culturally we're less aware of world films, maybe because of the size of our own film industry or our own national ego. Okay, that said, the more films the better, and it's interesting to see the international dialogue in a remake like this. -Nathan Deming

Fine look at this, VB. I was surprise how much I enjoyed Fincher's take with the material. For me, it was more cinematic (the Swedish version now comes off more as an very good movie made for television). The hardest job had to be Rooney Mara's since Noomi Rapace set the bar so high with her portrayal. Still, I appreciated her take. So, too, was Daniel Craig's Blomkvist. In fact, I bought him more as that character than his Swedish counterpart (certainly, he seemed more apt to have women want to bed him). The cinematography and screenplay made for better viewing and didn't give way future story plots from the novel's sequels, too. Thanks.

Nathan,
And...bam! You immediately identify my bias. As an international educator in my day job, my starting point is "just watch the international version, it's good for you!" I agree with both you and Leopard that it's a more interesting film because Fincher's at the helm. My preference for Noomi Rapace is just that-a preference-and a slight one at that.

You won't find someone who is more anti-remake of good movies than me, but I do give more leeway to adaptations by one country of another's film. I don't necessarily like it, but I accept the reality of it. In this case, I'm mixed. I didn't like the original Girl With the Dragon Tattoo but more often than not, I'm a Fincher fan so I'm not sure where I fall as to whether I even want to see it. I loved Infernal Affairs but liked Scorsese's version as The Departed almost as much. I love Blood Simple and the director Zhang Yimou but when he did his Chinese variation A Woman, a Gun and a Noodle Shop, it was awful. A Fistful of Dollars is good, but Yojimbo is better. The Magnificent Seven is fine but it doesn't come close to matching Seven Samurai.