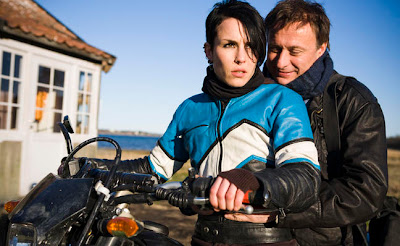 By Edward Copeland
Granted, I'm late to the literary turned cinematic phenomenon that follows the adventures of bad girl hacker Lisbeth Salander. I've not read any of the books and I just got around to watching The Girl with the Dragon Tattoo as my DVD player took its last breaths. Thankfully, I was able to finish the film on Netflix Instant. Unfortunately, I was just as bored watching it on my laptop as I was on my TV. Admittedly, Noomi Rapace proves quite interesting in the title role, but the film itself tells a terribly muddled tale that drags on far too long and, though I'm far from a squeamish viewer, many scenes reeked to me of little more than torture porn.

Of course, it takes awhile for the two main stories to intersect. The main thread concerns Mikael Blomkvist (Michael Nyqvist), an investigative reporter for a magazine, who gets sued for criminal libel by the subject of one of his pieces when the corruption he accuses him of proves to be faked. He's facing a prison sentence. Salander's involvement is limited to investigating the claims for a mysterious company and she comes to the conclusion that Blomkvist was set up.

That's enough story for me, but that's sidelined as a rich industrialist hires Blomkvist to investigate who killed a favorite niece of his decades ago before Blomkvist has to report for prison. Blomkvist catches someone hacking into his account and traces it back to Lisbeth, who decides to help his investigation.

Along the way, Salander is sexually brutalized by a parole officer and gets sadistic revenge on hin. When the mystery is "solved" we learn the killer is a particularly sadistic rapist who tortures his victims (and was raised and traied by a similarly sadistic rapist who also was a Nazi). There just is an element of sickness running through the entire film that's too unsettling to work as entertainment, especially since the mystery itself is so boring. Then, when it reaches the conclusion, it turns out that it isn't the resolution.

I started to get horror flashbacks to Scent of a Woman, where once you were relieved that you'd reached the end of that nightmare, it had to go wrap up the Chris O'Donnell school storyline that everyone had forgotten about and furthermore, no one cared if it got resolved. I just knew they'd have to get back to Blomkvist being set up, but fortunately they did that rather quickly.

Still, Rapace does somehow cut an interesting character amidst all the perversion and ho-hum plotting. I wonder if the rest of the trilogy gets better, or at least shorter, and what's attracting David Fincher to it. Didn't he already make his penance for Seven with Zodiac? Why does he want to go backward?

Comments:
This actually worked fairly well for me as a mystery-thriller once Salander and Blomkvist got together to solve the central mystery. But the exploitative sexual violence in the film's first hour left a really bad taste in my mouth, and that bad taste came back in a big way with the resolution of the mystery and, most offensively, its final shot, which I think exposes its claims toward empowering "feminism" as mostly a sham.

I still haven't bothered to see the other two films in the series (and I haven't read the books either). I'm in no rush. But yes, Rapace is fine.