That's how you fictionalize your life 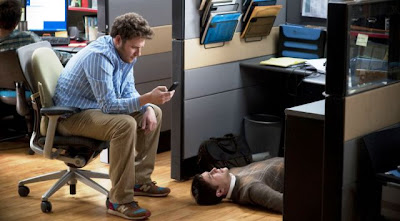 By Edward Copeland
While watching 50/50, screenwriter Will Reiser's fictionalized account of being diagnosed with a rare form of cancer when he was in his late 20s, I thought of Godard's famous quote about the best way to criticize a movie is to make another movie. Now, I don't think that Reiser and director Jonathan Levine set out to do this, but 50/50 displays an exceptional example of how not to get so locked in by one's life that your movie can't breathe as was the case with Beginners.

Joseph Gordon-Levitt stars as Adam Learner, an NPR employee who has been complaining of back pain for quite some time. When he finally gets it checked out, it turns out to be a malignant tumor on his spine. Doing the modern research technique — Adam turns to the Internet to learn what he can and finds that if the cancer hasn't metastasized, the online information gives the person with his type of cancer a 50 percent chance of surviving. When he shares that information with his best friend and NPR co-worker Kyle (Seth Rogen), Kyle likes the odds, telling Adam they are better than he'd get in a casino.

Adam's overbearing mom Diane (Anjelica Huston, in her best role in a long time) eagerly offers to take over and care for Adam despite the fact that she's already dealing with his father Richard (Serge Houde), who has Alzheimer's disease. However, Adam's live-in girlfriend Rachael (Bryce Dallas Howard) steps up and says she'll stand by Adam through his treatment. Given the turn his young life takes, Learner understandably sinks into depression, prompting his doctor (Andrew Airlie) to refer Adam to a therapist (Anna Kendrick), only she still has her training wheels on, so to speak, as she hasn't completed her doctorate and Adam is only her third patient.

50/50 contains a lot of laughs, but it's more dramatic than I was expecting. In fact, given that Rogen basically plays a fictionalized version of himself (and when isn't Seth Rogen playing a fictionalized version of himself. Keep in mind, I never saw The Green Hornet.), I can't help but wonder if Will Reiser's story inspired Judd Apatow when he came up with Funny People where Rogen becomes best friends with Adam Sandler's comic character with cancer. Of course, 50/50 contains many major differences from Funny People, the most important being that we care what happens to Gordon-Levitt's character while I suffered some disappointment that they didn't kill Sandler off.

Gordon-Levitt continues to have one of the most amazing careers for actors who began plying their craft at an early age, dating back to TV sitcom work on the short-lived The Powers That Be from Norman Lear when he was 11 and a recurring role on Roseanne a year later. At 14 or 15, he gave the best performance in the wretched film The Juror starring Demi Moore, Alec Baldwin and James Gandolfini. Then he more than held his own as part of the comic ensemble of 3rd Rock From the Sun for six seasons.

Since he's grown into adulthood, he's completely missed the curse that often afflicts child actors, giving good to great performances in films such as Mysterious Skin, Brick, The Lookout, (500) Days of Summer, Inception and now 50/50. Reiser's screenplay delicately blends comedy and pathos and Gordon-Levitt has shown that he's adept at both forms with his previous choices, but 50/50 may be his first vehicle that allows him to display his range realistically within the same film.

Rogen, with the exception of the creepy and defiantly unfunny Observe and Report always plays himself more or less. The Rogen you see in Knocked Up simply is an R-rated version of Seth Rogen the talk show guest or Seth Rogen, award show presenter. In most circumstances, an actor like this would drive me up the wall, but I never hold it against Rogen because from the moment I first saw him on the great TV show Freaks and Geeks, he so strongly reminded me of a friend of mine from high school that each time I see him it's like seeing that friend again.

Huston, as you'd expect, turns in a great performance, even if you don't get that much of her. Howard also does the best job I've seen her do, though she never seems to look the same from one film to the next.

The other real bright spot of 50/50 belongs to Kendrick. She was so good (and Oscar-nominated) in Up in the Air. She also popped up in the fun Scott Pilgrim Vs. the World ss Scott's sister and I first noticed her in her film debut, the underrated and underseen musical Camp.

From all the praise that 50/50 received, it didn't turn out to be quite the movie I was expecting. It's good, but not in the ways it had been sold to me.