Haven't we all chased an elusive purple-haired girl? 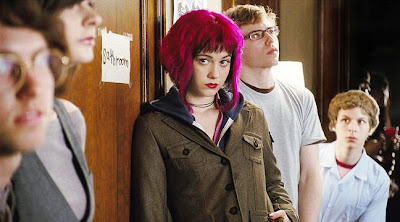 By Edward Copeland
After an interminable wait in my Netflix queue, finally I've caught up with Scott Pilgrim vs. the World. Give me well-written young romances with the right dose of cynicism and a healthy injection of ingenuity and I'm a sucker almost every time. Scott Pilgrim, where have you been all my life? Oh yeah, I think you were inside my head (minus the video game element).

It's always exciting when something you had no previous knowledge of or any expectations for turns out to be as much fun as Scott Pilgrim. Granted, I wouldn't have suspected it before its initial theatrical release until I heard the enthusiasm it engendered in some reviewers, so I wasn't going in completely blind when it finally landed in my DVD player. Still, that only raised the expectations pole it had to vault to please picky old me and it clears that bar by a mile.

Films such as this or my favorite 2009 film, (500) Days of Summer, or Nick and Norah's Infinite Playlist (which also starred Michael Cera) couldn't be more different, yet somehow they land on a similar groove within my brain and tend to enthrall me from beginning to end, even if Scott Pilgrim isn't quite in their league.

Each of these three very dissimilar films have their own strengths and with Scott Pilgrim, it's the film's strong ensemble of actors. It starts at the top with Cera as the title character who remains, since his days on the late, great television comedy Arrested Development, the best young straight man in the business today and includes a plethora of young talent such as Mary Elizabeth Winstead as Ramona Flowers, the would-be object of his affections; Alison Pill, Mark Webber and Johnny Simmons as the members of Scott's rock band Sex Bob-Omb ("We are here to make you think about death and get sad and stuff"); Anna Kendrick, so good in last year's Up in the Air, as Scott's sister; Ellen Wong as Knives Chau, Scott's 17-year-old sweetheart; and the best of the acting Culkins, Kieran, as Scott's gay roommate Wallace. Those names are just scratching the surface of the acting talent embedded in this film.

Michael Bacall & director Edgar Wright adapted the film from Bryan Lee O'Malley's series of graphics novels, which I've never read. Set in Toronto, the plot in a nutshell concerns Scott, still smarting after being dumped by his ex Natalie (Brie Larson), a successful rock star in her own right who now goes by the name Envy, and hooks up with the cute high schooler Knives, despite their five-year age gap. Then he sees her.

She is Ramona, covered with those purple-dyed locks and disinterested in Scott completely at first. Somehow, his goofy charm along with an Amazon delivery pays off and Ramona actually agrees to date him, even though he hasn't worked up the courage to break up with Knives. Of course, any romance has its complications and in this case, it's that Ramona's most recent ex has formed The League of Evil Exes (seven total) and Scott must face off against them all if he hopes to win his new beloved's heart.

Admittedly, for me at least, some of the video-game inspired fights provide the movie's least interesting parts, but what surrounds them is so fun and inventive, that it hardly matters and many of those are good anyway. I especially like Scott's victory over the ex (Brandon Routh) who gets psychic superpowers from his status as a vegan.

The casting of most of the exes (and some other uncredited cameos) add to the exuberant feeling the film left me with by its finish and, to its credit, its more layered than you'd expect with the characters admitting their own wrongs in order to move on. If I have a big criticism, it's that the film has a lot of tiny information box gags that are very hard to read not only because I saw it on TV but because they appear so fleetingly.

Co-writer/director Wright, who helmed the endlessly watchable comic zombie flick Shaun of the Dead, keeps the movie motoring along, so much so that I was so caught up in it that I was surprised how long it was when it ended. Scott Pilgrim vs. the World might not be high art, but it's pure joy.

Comments:
Edward, I'm so glad you liked Scott Pilgrim as much as I did. When a bystander said, "He punched the highlights out of her hair!" it was the highlight of my movie year.

This film definitely made my list for the year. Fine review of this, my friend. Thanks.