Survival of the greediest 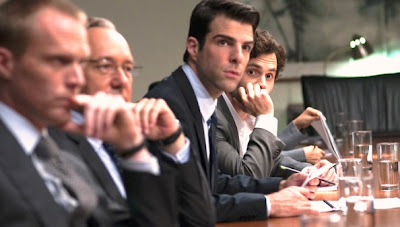 By Edward Copeland
If any Occupy gatherings want a movie to pass the sit-in time which also speaks to the group's issues, the protesters could make no better choice than the riveting Margin Call, a well-acted depiction of the callous way that a fictional Wall Street investment firm treats its employees, its clients and the U.S. economy — all for the sake of perpetuating executive lifestyles, everything else be damned.

Margin Call marks the feature writing-directing debut of J.C. Chandor and an impressive debut it turns out to be. It begins much like John Wells' wretched The Company Men, except that it's an investment firm laying off much of its work force and the movie's focus isn't trying to convince us to cry crocodile tears for the execs who no longer can afford country club fees.

One of the first to get his walking papers is Eric Dale (Stanley Tucci), a senior executive in risk management. His layoff shocks him but Dale seems more concerned about the data on his monitor when he receives the news. He tries to explain to the woman (Susan Blackwell) informing him of his fate about the importance of that in-progress project, but she stays on the severance script, letting him know what his exit package contains and how — for security reasons — his access to email, computer files, etc., has been severed. She sends him back to his office with a security guard to collect any "personal items" and escort him from the building.

As Dale grabs a few things, senior trader Will Emerson (Paul Bettany) sticks his head in to offer sympathies. Eric tries telling Emerson about his incomplete work, but Emerson tells him it isn't his problem anymore. As Dale takes his final walk to the elevator, box of belongings in his arms, one of his assistants, Pete Sullivan (Zachary Quinto), catches up to thank him for the chance to work with him. Eric again mentions his work — and he slips Sullivan a flash drive along with the warning, "Be careful." When Dale gets to the sidewalk, he attempts to make a call on his cell phone only to discover the firm shut that off as well, something that will bite the company in the ass.

Once the floor's layoffs have been completed, its top trading executive, Sam Rogers (Kevin Spacey), comes out of his office to give the survivors a pep talk, explaining that it's been a difficult day but it's one that they may all go through again throughout their careers. On the bright side, with so many people gone, the rest should celebrate because they've all moved up several notches in the firm's hierarchy. Pretty much the entire floor takes the advice literally and heads out for drinks after work, including Dale's other assistant, Seth Bregman (Penn Badgley), who encourages Sullivan to go but Pete has immersed himself in flash drive's data and stays to work on it.

When Pete finally figures out what Dale had discovered, he can't believe the numbers and calls Seth to come look at them, followed by Will Emerson. With the projections, the trading firm has become so overleveraged that if its assets (made up mostly of those infamous mortgage-backed securities) should decrease by 25%, the company will owe more than it is worth. Emerson drags Rogers in and soon the firm's most important players have arrived to work through the night for possible solutions to the impending explosion including the head of risk management, Sarah Robertson (Demi Moore), a particularly cutthroat senior exec, Jared Cohen (Simon Baker), and the company's CEO, John Tuld (Jeremy Irons).

As complicated as the subject matter is, Chandor's script makes it digestible and understandable. As a director, Chandor turns the material into a truly suspenseful thriller where no one's physical life may be at stake but it feels as something much larger is. Chandor's screenplay and direction prove great, but he also has been blessed with an embarrassment of riches in the casting department.

Jack Lemmon's influence on Spacey shows in his portrayal of Rogers, the veteran trader who serves as the firm's conscience. Irons turns in a fine performance as the CEO who feels his decisions are based on pragmatism not greed or self-preservation. Baker makes all his scenes come alive simply by the mysterious nature of his character. Quinto (who also served as one of the film's many producers) and Badgley work as a kind of yin and yang of up-and-comers in the business world. Though Tucci's role is limited, he makes the most of his appearances. Daily Show correspondent Aasif Mandvi even appears, playing it straight as a firm lawyer.

For me though, the film's standout ends up being Paul Bettany. He caught my attention first as Russell Crowe's roommate in A Beautiful Mind, but I've been waiting for him to break out ever since, but most of his roles I've missed or have failed to make an impression on me. As Emerson in Margin Call, Bettany creates a cool customer that you're never quite certain where his loyalties lie or whether he even has any. He's also wry and somewhat of a tour guide for the audience through the corporate maze.

Chandor has won and been nominated for several first feature and first screenplay awards and the Independent Spirit Awards has given this cast its Robert Altman Award for best ensemble, all very deserved accolades. I look forward to seeing where Chandor goes from here.