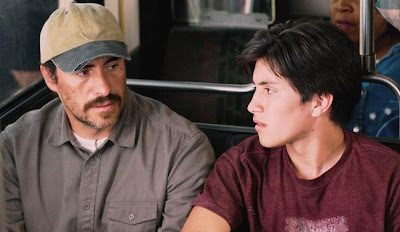 By Edward Copeland
When the Screen Actors Guild announced its award nominations this year, a couple of head scratchers popped up in its film nominations — a known actor in an unfamiliar film and an unfamiliar actor in a movie that only sounded vaguely recognizable. I discussed the former when I wrote about Nick Nolte in the hokey and formulaic Warrior. The latter came with the nomination of Demián Bichir as best actor for A Better Life. Thankfully, A Better Life and Bichir turn out to be both a better film and better performance than Nolte and Warrior.

A Better Life seeks to be in its own way an American variation on Vittorio De Sica's Italian neo-realist classic Bicycle Thieves, formerly known as The Bicycle Thief much as Beijing once was Peking. The additional layer added to A Better Life comes from the plight of undocumented immigrants to the United States who sneak into the U.S. hoping to find what the title promises. Given the recent economic circumstances here, you'd think would-be illegal immigrants would think long and hard before making the treacherous border crossing to be greeted for use as fodder in rabid political attacks on top of the difficulties of trying to get by. (As I'm writing this, an MSNBC promo just asked, "Is the American Dream in danger of extinction?" I always follow George Carlin's line, "They call it the American Dream because you have to be asleep to believe it.")

I digress. Chris Weitz produced and directed A Better Life and boy has Weitz's career traveled all over the map since he first came to prominence in the late '90s as a producer, a writer and an actor. He and his brother Paul co-wrote the animated Antz; he executive produced and occasionally wrote the TV remake of Fantasy Island; he produced most of the American Pie series; he played Chuck to Mike White's Buck in Miguel Arteta's you'll-like-it-or-hate-it Chuck and Buck; he and his brother Paul were two of the many writers credited with Nutty Professor II: The Klumps: he wrote and directed the great About a Boy with his brother Paul (Peter Hedges also contributed to the screenplay); he wrote and directed The Golden Compass; he produced the great films Nick and Norah's Infinite Playlist and A Single Man; and he directed The Twilight Saga: New Moon.

Now, after this unusual mixture of lowbrow comedies, big-budget films and critical darlings, Weitz helms a low-budget (It's funny — according to Box Office Mojo, its budget was $10 million, and I consider this low budget. The original Star Wars had a $11 million budget.) human story such as A Better Life featuring no well-known actors and a story by Roger L. Simon (whose previous credits include an Oscar nomination with Paul Mazursky for adapted screenplay for Enemies, A Love Story) and a screenplay by Eric Eason (who wrote and directed a 2002 feature called Manito that won many film festival prizes and was nominated at the Independent Spirit Awards that year for best first feature and Eason was named "Someone to Watch").

Somehow, this small film cut through the cacophony that comes during awards season and landed Bichir lead actor nominations at both SAG and the Independent Spirit Awards. Bichir plays Carlos Galindo, who has been living illegally in Los Angeles for decades. In fact, since his relocation he had a son, Luis (José Julián), pretty much your typical American teen whose relationship with dad can be frosty.

Carlos raises Luis alone — it's never quite clear what happened to his mother — doing his best to give his son a life he never had. He worries about the influence of gangs at Luis' high school and lives in constant fear that immigration agents will bust Carlos and deport him back to Mexico, separating him from his American-born son. Carlos keeps his head down as much as possible, working for another immigrant, Blasco Martinez (Joaquin Cosio), who has built up his own lawn care business in the wealthier section of L.A.

One day, Blasco tells Carlos that he's finally made enough money so he can return to Mexico and buy a farm. He offers to sell Carlos his truck, equipment and client list. Carlos hesitates, worried as usual about what happens if he gets pulled over without a driver's license. Besides, he isn't sure he should spend the money.

Meanwhile, Luis faces the usual troubles of a 15-year-old boy dealing with raging hormones and high school bullies. He gets into a fight with some of the seedier elements on campus and the security guard (Trampas Thompson) insists he lift his shirt so he can photograph his tattoos because the school won't tolerate gangs. Luis insists that he neither has tattoos nor belongs to a gang and he's making assumptions just because he's Hispanic, but the guard makes him do it anyway. Luis complies and shows the guard his bare skin, which gets photographed anyway.

Carlos' sister Anita (Dolores Heredia), who also lives in L.A., hears about her brother's opportunity and loans him the cash to take over Blasco's business. Carlos feels confidant for a change and his usual friction-filled relationship with Luis improves. On his first day with the truck, Carlos scouts among the many immigrants looking for day laborer's work. Unfortunately, he makes the wrong pick, choosing a man named Santiago (Carlos Linares). When they get to a yard with a tall tree and Carlo shows Santiago how they scale it to do the work, Santiago takes the opportunity to steal the truck with all the equipment.

Most of the remainder of the movie involves Carlos and Luis attempting to locate Santiago and the truck that holds the key to their life right now. Carlos keeps his anger and anxiety mostly in check, but Luis doesn't hide his hotheadedness, ready to give anyone a beatdown. It's during this journey when we get a better understanding of the father.

Bichir gets some nice speeches, especially when he explains to his son what he meant to him when he first saw him. The actor, who has been working for a long time including playing Castro in Steven Soderbergh's Che and having the recurring role of Esteban Reyes on Showtime's Weeds. His performance isn't showy, but quiet and touching at times, which makes the fact it received any awards notice all the more surprising. As I always like to remind people during this season, though I can never recall who said it, the prizes usually go to those "who act the most, not the best."

Weitz properly modulates the pacing of A Better Life, never rushing to try to force it into a suspense tale. The screenplay doesn't really contain that many surprises though its closing image is a heart-rending one.