Play it again, Nick and Norah 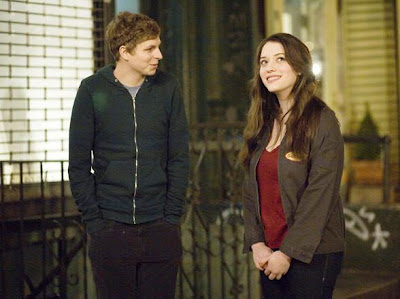 By Edward Copeland
When talking about the Oscars just ended, a common conversation was the dearth of worthwhile adapted screenplay contenders. Now, I thought Doubt and Frost/Nixon were fine and I realize I was in a minority of fans of Revolutionary Road, which was snubbed. However, the other three nominees: Benjamin Button, The Reader and winner Slumdog Millionaire all had extreme problems in the script department. Now, as I catch up on films I missed, I find there was a superb adapted screenplay that got completely ignored in Nick and Norah's Infinite Playlist.

Lorene Scafaria adapted the novel by Rachel Cohn and David Levithan and Peter Sollett directs with a sure hand to create the first film I've seen in ages about teenagers that seems as if it actually knows teens. You smile, you cringe, you remember, you recognize.

Everyone's favorite young straight man Michael Cera stars as Nick and the wonderful Kat Dennings plays Norah. Unlike the more famous cinematic Nick and Nora, there is no murder to be solved, though a body does disappear, though she is alive and hysterically drunk (Ari Graynor).

The plot is simple: Nick is unable to let go after breaking up with his girlfriend, making an endless series of CD song mixes for her which she discards and her schoolmate Norah rescues from trash cans because she loves the tunes. (I'm so old, when we did this, we made our mix tapes on actual cassette tapes.)

Nick, Norah and the ex (Alexis Dziena) are unexpectedly thrown together when they all end up at a gig for Nick's rock band that lacks a drummer and a permanent name. When rumors circulate that a favorite band, Fluffy, is giving a free, secret concert somewhere in New York. As the search goes on for both the wandering drunk girl and the concert, you see the seeds of attraction grow between Nick and Norah.

What's remarkable about the film is that it doesn't hit a false note. The characters all sound and feel palpably real and I can't remember the last time I saw a film about teens that I could say that about.

Even films that were mostly good such as Juno saddled their young characters with dialogue that was too cute by half. Nick and Norah rings true, no matter how long it's been since you've been a teenager yourself.