It's not alright, Jack — the movie 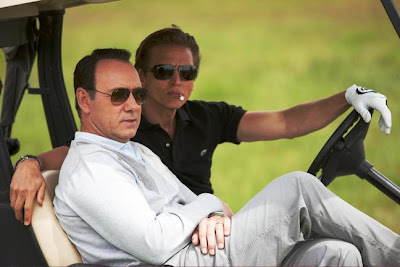 By Edward Copeland
It's always fascinating to know a real story behind something and then see a fictionalized version or, in this case, to watch a documentary on a subject and then soon afterward watch the feature film take. The subject is Jack Abramoff and the documentary was the excellent Casino Jack and the United States of Money. The feature is Casino Jack starring Kevin Spacey as Abramoff and truth bests fiction once again.

There was a similar case when Werner Herzog made the documentary Little Dieter Needs to Fly and then years later went back and made a feature version called Rescue Dawn. In the case of Abramoff, we're seeing two different filmmakers take aim on Abramoff.

I never met Hickenlooper, though he did belong to that strange new class of acquaintance known as a Facebook friend, so I wanted to be as charitable as possible to his posthumous release, but I have to be honest as well. As Robert Altman told Roger Ebert which Ebert mentioned in his little rule book for critics: "If you never gave me a bad review, what would a good review mean?"

My review of Casino Jack isn't a flat-out pan, but it certainly could be better and pales in the shadow of the documentary version of the Abramoff story. It's a shame, especially coming from a documentary filmmaker. Though Hickenlooper did not write the screenplay for Casino Jack (Norman Snider did), it definitely plays with the facts, at least as they are presented in the documentary, and they aren't outlined in a way that's as easy to tell what's going on as in the case of the nonfiction film.

One bit of casting in Casino Jack sticks out like a huge sore thumb and that's Jon Lovitz playing Adam Kidan, a mob-connected mattress king that Abramoff and Michael Scanlon (played here by Barry Pepper) enlist as part of their plan to wrest away control of the SunCruZ offshore gaming ships (which are called SunSail here for some reason) from shady Greek owner Gus Boulis (Daniel Kash) who later was killed.

The real Kidan gets interviewed extensively in Alex Gibney's documentary and doesn't come across remotely like the insecure, nebbish that Lovitz plays in Casino Jack. Later, when they use actual lines (and some real footage) from a Senate hearing that the documentary used as well, Casino Jack shows Abramoff as the one who testified when the documentary clearly showed it was Scanlon who appeared and frequently invoked the Fifth.

Spacey has made a point of saying that Abramoff loved to do impressions and the documentary also includes Abramoff's obsession with movies and Hollywood, but Spacey as Abramoff does impressions of famous people so often in Casino Jack, it really comes off more as a chance for Spacey to show off his gift for mimicry than historical accuracy or something that needed to be shown to get the full breadth of the story.

One other note worth mentioning is that Casino Jack contains one of the final appearances of the great character actor Maury Chaykin as a mobster that Kidran turned to in his conflict with Boulis.

Casino Jack isn't without its moments, but even if there hadn't been a documentary about Abramoff that I'd seen recently, it still wouldn't have been that good a movie. It's just that its lapses in accuracy wouldn't have been as apparent. It's sad that someone as talented as Hickenlooper should end on this note.

Comments:
Nice review. Unfortunately, I have to correct you about George Hickenlooper. He's directed a good amount of narrative features, including the Big Brass Ring (an unfinished Orson Welles story), The Man From Elysian Fields, Factory Girl, Dogtown, and others. He also directed the short film that led to Sling Blade. He's more known for his documentaries, but has built an impressive resume of fictional movies.

Thanks for the correction. I was going to doublecheck that before it ran but I had an unexpected trip to the ER last night and never got back to it in time. Thanks.