From the Vault: Hearts of Darkness: A Filmmaker's Apocalypse 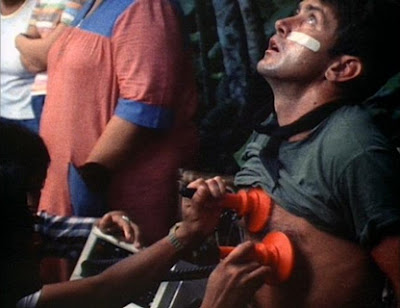 One of the most difficult film productions of all time has spawned a solid documentary that actually succeeds more consistently than its subject.

Francis Ford Coppola used Joseph Conrad's novella Heart of Darkness as a vehicle to examine the Vietnam War in his 1979 film Apocalypse Now. As part of the movie's planned promotion, United Artists dispatched a documentary crew to the Philippines with Coppola in order to craft potential publicity material.

Uneasy about having a stranger on the set, Coppola made a deal so that his wife Eleanor could be the documentarian and she filmed the entire behind-the-scenes proceedings, including secretly taping conversations with her husband.

The result, released 12 years after Apocalypse Now's premiere, is Hearts of Darkness: A Filmmaker's Apocalypse, a documentary using that footage that has been assembled by Fax Bahr and George Hickenlooper that not only works better than the 1979 film it chronicles but presents a wonderful examination of the madness of a movie set.

Coppola, coming off the success of the original Godfather films in the 1970s, decided to transform John Milius' script into his own vision of Vietnam which he saw as a metaphor for madness.

The production endured typhoons, heart attacks and practically every conceivable problem imaginable and once you see this behind-the-scenes look, you realize how amazing it is that Apocalypse Now turned out as well as it did.

The documentary recounts it all, from replacing lead actor Harvey Keitel with Martin Sheen to Marlon Brando's eccentricities and problems with Ferdinand Marcos' Philippine government which would routinely take back borrowed helicopters in the middle of scenes to use against rebels hidden in the hills near the set.

This year, Wall Street Journal film critic Julie Salamon published The Devil's Candy, a behind-the-scenes look at how The Bonfire of the Vanities became the cinematic debacle it did. The book and this documentary serve as interesting companion pieces because Apocalypse Now had similar and even larger problems during its production, making it seem as doomed as Bonfire looked after reading Salamon's account.

One thing that Salamon's book accomplishes that Hearts of Darkness omits is the filmmaking process itself. The documentary shows little of the preparations for a shot or how sequences actually turned out. Hearts of Darkness concerns itself more with the madness than the method while it proves that sometimes a method exists even when there seems to be no method at all.

Apocalypse Now was good but not perfect. After watching Hearts of Darkness, it amazes that the movie got finished at all.