It's not alright, Jack 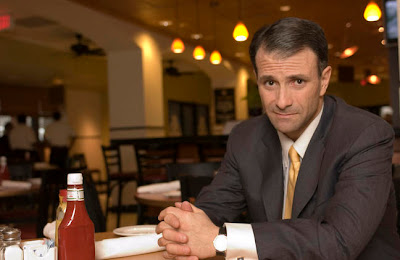 "We've lost sight in Washington of what Congress is for, of who Congress serves. It serves the people of the United States. Instead, we've found it serves Chinese sweatshop owners, Russian gangsters — Congress is now serving those interests. The thing is it has become accepted now, so part of our political culture now, that it's normal. Your average citizen doesn't have the voice you'd expect him to have because these voices are much louder and much better financed."
— J. Michael Waller, director, Institute of World Politics

By Edward Copeland
It's slightly confusing that jailed former lobbyist Jack Abramoff has inspired two 2010 films about his escapades and that both have Casino Jack in the title. I've yet to see the fictional feature starring Kevin Spacey and directed by the late George Hickenlooper, but the documentary Casino Jack and the United States of Money by Alex Gibney, the great documentarian behind past gems such as the Oscar-winning Taxi to the Dark Side and Enron: The Smartest Guys in the Room has made an excellent nonfiction version. On top of that, Gibney also directed or co-directed THREE other 2010 documentaries I've yet to see, Client 9: The Rise and Fall of Eliot Spitzer, Freakonomics and My Trip to Al-Qaeda. He also executive produced the phenomenal No End in Sight and was a consulting producer on the exquisite Who Killed the Electric Car? Busy man and from the films I've seen him make so far, a damn fine nonfiction filmmaker as well as a prolific one.

Even if you followed the tale of uberlobbyist Jack Abramoff closely, Gibney's film will keep you riveted as it tells the story of his life and various malfeasance through interviews with many of the associates who were involved in his schemes, either as victims or perpetrators. You also get handy reminders of what a true character the man really was, dating all the way back to his days as he took over the national college Republicans to spin them in a more conservative direction with friends such as Karl Rove and Grover Norquist.

It's also funny to remember his interest and obsessions with pop culture, such as when he grew tired of his secular Jewish rearing and decided to become orthodox based on, of all things, seeing the film version of Fiddler on the Roof. Then there is the obsession he and other college Republicans had with the movie Patton, repeating the famous speech George C. Scott delivers in the film, only replacing every German or Nazi reference with Democrat. Longing for spy games at heart, when an Angolan adventure goes awry, Abramoff even turned to movie producing, financing the Dolph Lundgren hoot Red Scorpion.

However, lobbying proved far more lucrative to Abramoff than show business ever could have been, ethics and laws be damned. It led to the the top our system of legalized bribery (and some instances of not-so-legalized bribery) as he peddled influence on Capitol Hill, mostly with Republicans though Democrats cashed in on his largess as well. The shocking parts are watching as he enlists Indian tribes as clients to promote gaming on one hand and charges them huge fees while on the other hand helps forces out to stop the Indian gaming movement if it interferes with specific clients. Rest assured though, Abramoff and his associates were making money on both sides of the equation.

Casino Jack and the United States of Money tells Abramoff's story in a sleek, informative way and it's still unbelievable that only member of Congress, Bob Ney, R-Ohio, went to jail for his involvement with the man, even if he did help shove Tom DeLay out the door. Gibney saves his suckerpunch for the epilogue though, when you realize that as bad as the system is and as horribly as Abramoff abused it, it turned out to be small potatoes compared to what the lobbyists for the titans of Wall Street have and continue to accomplish.

The result should really be more depressing than it is, but it's made too well and entertains too much for much sadness to seep in.