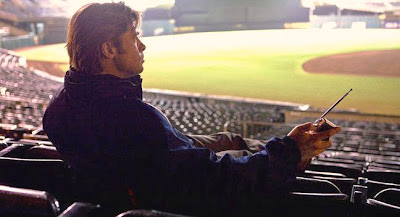 By Edward Copeland
Brad Pitt, as far as I'm concerned, always has received a bit of a bum rap as an actor. Granted, he doesn't have the breadth of abilities of others in his generation such as Edward Norton or Philip Seymour Hoffman (who actually co-stars with him here in Moneyball), but when Pitt gets a role that falls into his narrower range such as in Fight Club or The Assassination of Jesse James By the Coward Robert Ford, he truly excels. In fact, the older Pitt gets, the more his talent grows and there hasn't been a better example yet than his performance as Billy Beane in Moneyball where he delivers his best work yet. It also doesn't hurt that he's working from an incredibly strong script by Steven Zaillian and Aaron Sorkin.

Zaillian and Sorkin's screenplay, with a story by Stan Chervin, was adapted from Michael Lewis' book Moneyball: The Art of Winning an Unfair Game. While there have been many films about baseball and several I've liked a lot, Moneyball may revolve around the game, but it doesn't resemble other baseball movies though it manages to be just as compelling — if not more so — than other sports movies where the climax involves a Big Game. Bennett Miller helms Moneyball, his first film since his feature debut, Capote, six years ago. While I liked Capote well enough, Moneyball represents a quantum leap forward in quality for Miller.

Billy Beane works as the general manager of the Oakland A's and the movie begins when the team faced off against the New York Yankees in the October 2011 American League Championship Series. At the time, the A's boasted some talented up-and-coming players such as Johnny Damon and Jason Giambi and Oakland almost pulls off the win, but the Yankees prevail. Figures on the screen put the disparity between the teams in very stark terms: It isn't really the Yankees vs. the A's, it's $114,457,768 vs. $39,722,689. Teams with smaller payrolls just can't compete (especially once the season ends and the Yankees poach Damon and Giambi from the A's). As one sports radio talk show host comments, "It's like we're a farm system for the New York Yankees." I don't follow baseball, but that is a ridiculous disparity. It's much like the political system has become following the Supreme Court's Citizens United ruling.

Beane, once a promising player himself, pleads to the Athletics' owner for more money to try to level the playing field with the richer teams, but the owner balks. During a meeting with Cleveland Indians General Manager Mark Shapiro (Reed Diamond) to obtain replacements for his lost stars, Beane gets shot down at every turn by what he can afford. While he's there, he notices a young man (Jonah Hill) whispering advice that appears to be taken. Beane zeroes in on the guy and learns his name is Peter Brand. Brand advocates a different approach to team building. Instead of chasing star players who cost a fortune and may or may not deliver championships, Brand proposes following a statistical formula based on which players get on base most often, usually at lower salaries.

Oakland's veteran baseball scouts and his manager Art Howe (Hoffman) resist this new system and it falls flat at first as Howe continues to use the players the way he always has, ignoring Beane's suggestions. Finally, Beane makes moves that force his Howe to give his new player acquisitions to get game time. Eventually, the new method reaps rewards and the A's go on an incredible and historic winning streak. Even if you aren't a baseball fan, it's difficult not to feel the excitement when a home run comes at a crucial time.

The only criticism I had with Moneyball is that it dips a bit too often into flashbacks to Beane's life as a promising baseball player coming out of high school (It doesn't help that the actor playing the younger Beane doesn't look that much like Pitt). They could have made all the same points they make in those scenes in less time and without so much repetition and shortened the film's 133-minute running time. However, that's a minor complaint against an otherwise solid film.

Pretty much from top to bottom, the cast excels, including brief appearances by Robin Wright as Beane's ex-wife and Arliss Howard as the head of the Boston Red Sox. Hoffman turns in a fine performance as always, but he lays back since this isn't his movie and makes no scene-stealing attempts. Hill gets to show he's capable of playing a role unlike anything he's played before. He's been fine in most of the comedies in which he's appeared, most from the Judd Apatow Factory such as Funny People, Walk Hard: The Dewey Cox Story, Superbad and Knocked Up, even if the movies' quality varied, but it's nice to see him given the opportunity to portray a completely different type of character and do it well.

Combining the screenplay and Pitt's best-ever performance proves ultimately to be the winning formula that makes Moneyball so compelling. Pitt (who also was a producer) never strikes a false note and the film rarely does either. Even though Moneyball tells a true story, I didn't know what happened in 2002 so the ending came as a genuine surprise, yet one that felt wholly appropriate — and not the way a fictional script would choose to finish its tale. That's another reason Moneyball belongs on the list of 2011's best films.

Comments:
I'm sorry, but Brad Pitt has never struck me as an actor with a narrow range. And the two roles that you had complimented him on - "Fight Club" and "The Assassination of Jesse James By the Coward Robert Ford" - are as different as night and day. And both are completely different from his role in "Inglorious Basterds".