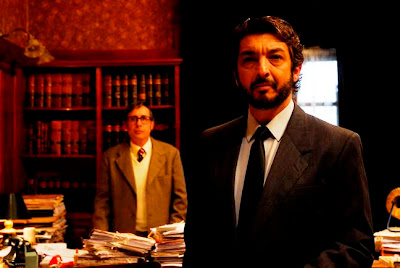 By Edward Copeland
With The Secret in Their Eyes, I have now seen four of last year's five Oscar nominees for foreign language films and, in this case, also the film that won. While Juan Jose Campanella's film turns out to be OK, I'd rank it fourth of the four I've seen. The Academy picked wrong again. What a surprise. Thankfully, it's not an embarrassing pick like past winners such as Mediterraneo or Burnt By the Sun.

I knew when I heard and saw Campanella's name in connection with this film, that it seemed awfully familiar, but I couldn't recall any other films of his that I might have seen so, as any desperate film researcher does in the Internet age, I turned to the Internet Movie Database where I was surprised to learn why the director's name rang a bell.

True, he did direct a good film from several years ago I had seen called Son of the Bride featuring a spectacular performance by Norma Aleandro as a woman suffering from Alzheimer's whose devoted husband (Hector Alterio, Aleandro's co-star from the great 1985 film The Official Story) decides to give her the elaborate wedding she never received.

However, Campanella's feature film credits are relatively sparse and the reason his name sounds so familiar is he is a prolific director of American episodic television, working on series such as House (five episodes), Law & Order: SVU (17 episodes), Law & Order: Criminal Intent (two episodes), 30 Rock, Ed and even Comedy Central's Strangers With Candy (eight episodes).

Enough with his credits. Back to the film at hand, the Oscar-winning The Secret in Their Eyes stars Ricardo Darin, who played the title character in the vastly superior Son of the Bride. Darin plays retired Argentinean legal oounselor Benjamin Esposito who is contemplating a book about an old case he's never been able to shake: the brutal rape and murder of a woman whose killer confessed but was let go because the system was able to use him as a tool to gather information against other bad guys. The brutality of the man's crime and the man's additional murder of another investigator and threats against others including Esposito don't seem to bother Esposito's superiors, who write the killer's actions off as "his private life."

Complicating matters further for Esposito, who has dwelled on the case for a quarter-century, is his unresolved feelings about his thwarted romance with his immediate supervisor Irene Menéndez Hastings (Soledad Villamil), who returns his feeling but held them at bay because of office protocol, her engagement to another and Esposito's own exile for his own safety.

As I said, The Secret in Their Eyes is by no means a bad film, but it takes a terribly long time to get its engine running, seeming to idle for far too long. Though it won the 2009 Oscar, it didn't get U.S. release until this year. By the time it gets to its most powerful moments, only about 25 minutes remain in the film. The acting, especially by Darin and Villamil, holds the film together until that point, but barely. Even they can't save it from teetering dangerously close to being just plain dull.

The only Oscar nominee for foreign language film of 2009 I haven't seen is Peru's The Milk of Sorrow, but The Secret in Their Eyes definitely pales in comparison to Ajami and most especially Michael Haneke's The White Ribbon and Jacques Audiard's A Prophet.