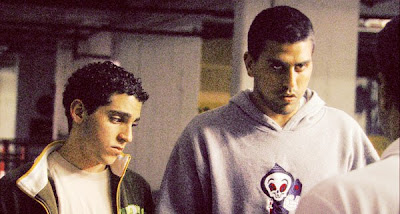 By Edward Copeland
Even in the United States, which strives to be the most pluralistic of societies, we still have trouble finding peaceful co-existence between people of different ethnicities and religions. Now, imagine that struggle in the small, heated patch of land where Palestinians, both Muslim and Christian, and Jews are forced to interact and those who realize the hate and resentment is ridiculous face the hard realities of centuries of conflict and anger and you get the basic idea behind Ajami.

Ajami, one of the five finalists for last year's Oscar for foreign language film, began as an unusual experiment. Often, these sorts of experiments can produce mixed results but, by and large, Ajami proves successful.

Set in a subsection of Tel Aviv where people of the various ethnicities and religions reside claustrophobically, Ajami was co-written and co-directed by a Palestinian and an Israeli, Scandar Copti and Yaron Shani, using nonprofessional actors with a scenes that were largely improvised. It's amazing the film turns out as well as it does.

Ajami is not perfect. It is divided into chapters with lots of characters and it takes a while to keep track of what's going on with all the grudges and vendettas between Palestinian families over senseless deaths, boys trying to pay for ailing moms, Arabs ostracized for having a Jewish girlfriend, Palestinian Muslims and Palestinian Christians ordered not to date; an Israeli cop determined to find the Arab he's certain killed his soldier brother. It can be confusing and it certainly can be grim going, but it is compelling and the pieces do eventually come together.

Still, cultural and religious differences alone don't drive the story. The grudges often derive from other sorts of conflict, lead to mistaken identity, causing characters mounting debts which lead to the burgeoning crime that exists alongside chronic unemployment and ridiculous health care in the Palestinian territory.

Most tellingly, Copti and Shani don't try to preach. The most compelling characters' motives seem noble and find the sectarian nonsense well, nonsense. They just want to live their lives. Unfortunately, centuries of bloodshed and intransigence on all sides prevent happy endings and the filmmakers don't force one or try to offer solutions that no one else has been able to secure.